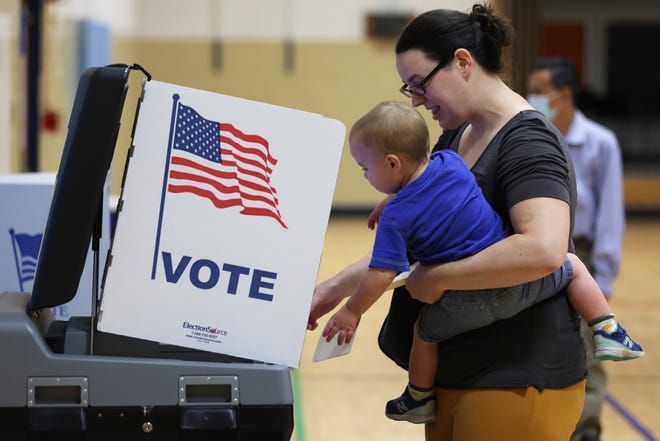 One hundred days before the midterms, Americans are anxious about the future and unhappy with their options.

A new USA TODAY/Suffolk University Poll shows Democrats with a narrow advantage over Republicans on the congressional ballot, 44%-40%, a bit better than the 40%-40% split they scored in June. But gloom about the nation’s economy and its politics still pose big hurdles for Democratic hopes of avoiding significant losses in November.

By 47%-42%, voters say they want to elect a Congress that mostly stands up to President Joe Biden rather than one that mostly cooperates with him.

At stake in November is the power to pass legislation and to launch investigations – whether into the Jan. 6 insurrection or Hunter Biden’s finances – and the prospects for collaboration between Congress and the president during the second two years of his term.

“Everything seems to be in flux,” said James English, 60, a Republican-leaning independent from Sugar Valley, Texas, who was called in the survey. Asked what issue was most important to his vote, he said, “Generally stability, whether that’s economic or personal security.”

“It feels a little unsettling, just because the bipartisan divide is making everyone so angry and have a lot of resentment towards other parties,” Cherish Derrickson, 23, a Democratic law student from Lexington, Kentucky, said in a follow-up interview. “I wouldn’t necessarily say the country is burning down, but it’s definitely going backwards, especially with the removal of women’s reproductive rights.”

Congress is fractured. So Democrats, Republicans went to family therapy – together. We were there.

By 5-1, 76%-15%, those polled say the country is on the wrong track rather than heading in the right direction. A majority of those in every demographic group – across party lines and region, race and age – agree on that.

The mood is more dire than it was in the USA TODAY/Suffolk Poll taken about this time in 2018, before the first midterms of Donald Trump’s presidency.  Americans then said by 55%-34% that the nation had gotten off on the wrong track – not a rosy assessment, but more optimistic by double digits than today. Trump’s approval rating then was 40%-56%, almost precisely the same as Biden’s current approval rating of 39%-56%.

That fall, Republicans lost 40 seats and control of the House.

The new survey of 1,000 registered voters, taken by landline and cellphone Friday through Monday, has a margin of error of plus or minus 3.1 percentage points.

Concerns about the economy and inflation are driving the political debate. Growth numbers scheduled for release Thursday will show whether the economy has contracted in two consecutive quarters, the common definition of recession, but 50% of Americans say a recession already has arrived.

Just 9% say the economy is now in a recovery.

Rate hikes:Fed increases key interest rate by 0.75 points again. How will it affect the economy and you?

In response to an open-ended question, 20% cite the economy in general and another 11% inflation in particular as their top issue. The only other concern to reach double digits is abortion, at 16%, an issue that has been propelled by the Supreme Court decision last month overturning recognition of abortion access as a constitutionally protected right.

Every other issue, including some of the hottest on the political scene, trails far behind: Immigration/border control at 5%, gun control at 3%, climate change/the environment at 3%, health care at 3%, voting rights/integrity at 2%, education/student loans at 1%. The COVID-19 pandemic doesn’t register at all.

“For these respondents, a recession is not perception; it’s reality,” said David Paleologos, director of the Suffolk Political Research Center. “Lower-income households have been hit especially hard by being forced to make critical allocation choices for every dollar at their disposal.”

What matters to Julie Clifford, 62, a Republican from Burleson, Texas, is the economy. The highest inflation rate in four decades has made things hard on people like her who live on a fixed income, the retired engineer said. “We’re just having to make choices about what we do, and things we had planned to do during retirement and can’t now because we have to watch the money for the basics.”

She’s not alone. In the survey, 58% say they are going out to eat less often because of inflation. Nearly half, 48%, report driving less; 45% are cutting back on groceries; and 45% are postponing or canceling travel or vacation plans.

Among households with annual incomes of less than $50,000, 70% are eating out less often, 60% are cutting back on groceries and 60% are driving less.

Low marks for Biden and Trump

Even among Democrats, while 77% approve, only 35% “strongly” approve.

An approval rating that low has traditionally signaled significant losses for the president’s party in midterm elections. The nonpartisan Cook Political Report now predicts Republicans will gain 15 to 30 House seats, well above the four the GOP needs to flip to to take control. The Senate, now divided 50-50, is harder to predict.

But Trump is no more than a mixed blessing for the GOP. By nearly 3-1, 44%-16%, those surveyed say Trump’s endorsement would make them less likely to support a congressional candidate rather than more likely.

Even among Republicans, only 38% say his endorsement would make them more likely to support a candidate; 53% say it wouldn’t have an effect.

The strongest enthusiasm seems to be for, well, somebody else.

“Trump kind of stirred the pot a little bit for everybody, and it just seems like it’s divided our country to where there is no conversation being had for the American people,” said Danielle Cobb, 34, a Republican and a Trump supporter from Tucson, Arizona. “So it’s like a divorced couple that have kids and they stay together for the kids, even though they don’t realize that all of you are infecting your children.”

Cobb, a real estate appraiser, fears that partisan battles means political leaders are “forgetting about us as Americans in our daily lives.”