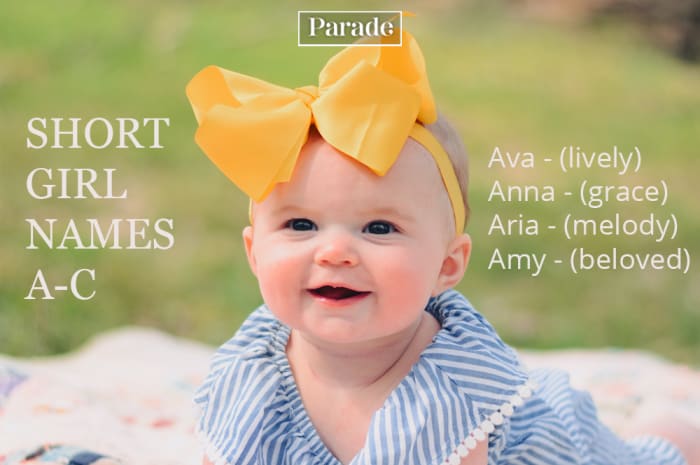 A new baby girl is such a bundle of joy. In fact, Joy makes a fantastic name for a girl to define this feeling of utter happiness. The name, Joy, and other short girl names are both easy to say and are easy to spell. This is always a nice consideration (that your daughter will likely appreciate!) when it comes time for school to start. Not only is it easier to learn to spell a short name, girls tend to abbreviate their friends’ names to cute nicknames anyway!

If you are after cute and easy names for your daughter, you may find just what you are looking for on this extensive list of short girl names. The list is categorized by letter of the alphabet to make it easy for those who have a specific letter in mind. All of the names are either four letters or less, or they contain just one syllable.

Whether you are looking for a name that is classic, unique or trendy, you will find plenty of inspiration on this list of 200 short girl names.

1. Ava – Means “birdlike, lively” and has a Latin origin.

2. Anna – The name comes from a Hebrew origin and means “grace.” (Grace would make a nice middle name for the name Anna!)

3. Aria – Has many different origins and means “melody” or “song.”

4. Amy – Means “beloved” and has Latin and French origins.

5. Abby – Has an English origin and means “father’s joy.”

7. Alex – A feminine form of the name Alexander which means “defender of men.”

8. Ash – A tree name that is short for Ashley and has an English origin.

9. Blake – A name for either boys or girls and is shared by actress Blake Lively. The name has an English origin and, surprisingly, means both “fair-haired” and “dark.”

10. Brooke – Of English and German origins and means “small stream.”

14. Blythe – Means “cheerful, joyful, pleasant” and has an English origin.

21. Char – A French feminine name that is a variation of Chardonnay, Charlene and Charlotte and means “free man”.

Related: A-Z List Of Short Boy Names That Are Simple And Sweet

27. Deb – Short for the Hebrew name Deborah and means “bee.”

30. Drew – Best known from actress Drew Barrymore, this name means “wise” and is of Welsh origins.

39. Ella – This name has many origins and meanings. In Hebrew, it means “goddess.”

44. Erin – Means “from the island to the west” and is of Irish origin.

47. Elin – Means “sunbeam” and has Dutch and Scandinavian roots.

52. Fara – Means “lovely, pleasant” and is of English/Arabic origin.

53. Grace – Of Latin origin and means “goodness” and “generosity.”

55. Gail – Hebrew origin that is derived from Abigail and means “my father rejoices.”

68. Ilsa – Has German, Spanish and Dutch origins and means “pledged to God.”

70. Jill – Comes from the name Gillian and means “child of the gods.”

75. Jazz – Nickname for Jasmine and means “gift from God.”

76. Judy – Hebrew origin meaning “He will be praised.”

80. Kim – Short for Kimberly and means “of the clearing of the royal fortress.”

86. Kass – Means “catcher of men” and has an English origin.

94. Lexi – A diminutive of Alexis that means “man’s defender.”

96. Leia – Star Wars fans are familiar with this princess! The name means “child of heaven” and is of Hebrew origin.

99. Lara – Means “citadel” and “cheerful” and has Latin, Greek and Russian roots.

Related: 102 Celestial Baby Names For 2022 That Are Out Of This World, Inspired By Astrology

123. Pearl – Means “precious gemstone” and is of English origin.

Related: You Can (Alpha)Bet On It – Here Are The Trendiest Baby Names A-Z On The Rise For 2022

136. Skye – Means “island of the clouds” and is of Scottish origin.

163. Val – Short for Valerie which originates in Latin and means “powerful, strong.”

178. Yula – Means “youthful” and is of Russian and Latin origins.

187. Yuri – As a girl’s name it means lily flower and is of Japanese origin.

Next up, 125 gender-neutral names!