4 Weeks Out, Senate Control Hangs in the Balance in Tumultuous Midterms 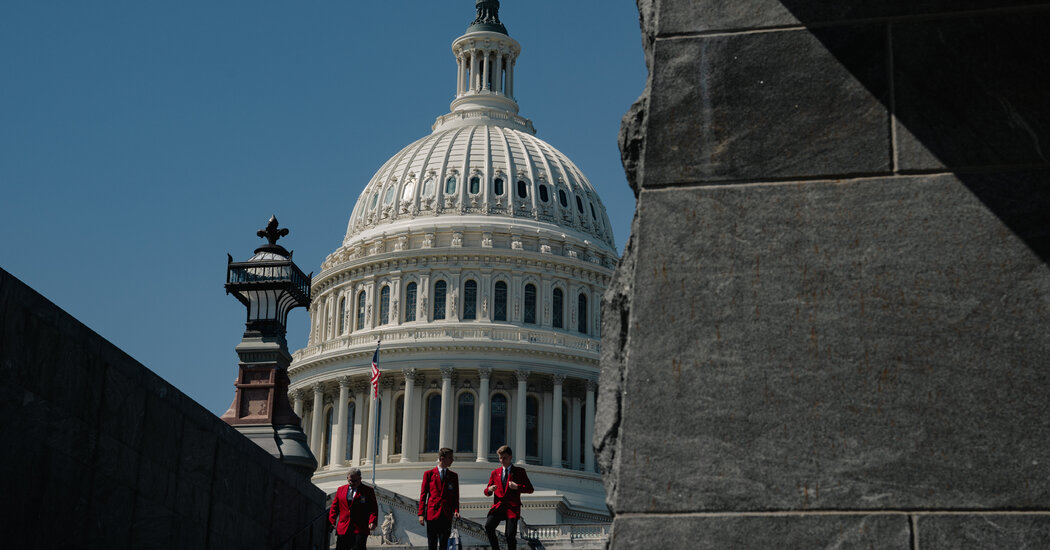 Exactly one month until Election Day, Republicans remain favored to take over the House in November, but momentum in the pitched battle for the Senate has seesawed back and forth as a multimillion-dollar avalanche of advertising has blanketed the top battleground states.

For almost two decades, midterm elections have been a succession of partisan waves: for Democrats in 2006, Republicans in 2010 and 2014, and Democrats again in 2018. Yet as the first mail-in ballots go out to voters, the outcome of the 2022 midterms on Nov. 8 appears unusually unpredictable — a reason for optimism for Democrats, given how severely the party that holds the White House has been punished in recent years.

Three states in particular — Georgia, Nevada and Pennsylvania — that are seen as the likeliest to change party hands have emerged as the epicenter of the Senate fight with an increasing volume of acrimony and advertising. In many ways, the two parties have been talking almost entirely past each other both on the campaign trail and on the airwaves — disagreeing less over particular policies than debating entirely different lists of challenges and threats facing the nation.

Republicans have pounded voters with messages about the lackluster economy, frightening crime, rising inflation and an unpopular President Biden. Democrats have countered by warning about the stripping away of abortion rights and the specter of Donald J. Trump’s allies returning to power. Both parties are tailoring their messages to reach suburban voters, especially women, who are seen as the most prized and persuadable bloc in a polarized electorate.

The year has progressed like a political roller coaster. Republicans boasted that a typical wave was building in the spring, and Democrats then claimed the momentum after the Supreme Court’s decision overturning Roe. v. Wade galvanized progressive and independent voters. Now the pendulum seems to have swung back.

“I wish the election was a month ago,” conceded Navin Nayak, a Democratic strategist and the president of the Center for American Progress Action Fund. He was heartened, however, to see his party with a fighter’s chance, adding that Democrats had “no business being in this election.”

The challenge for Democrats is that they also have no margin for error. Clinging to a 50-50 Senate and a single-digit House majority, they are seeking to defy not only history but Mr. Biden’s unpopularity. “Even the slightest tremor is going to put the Democrats in the minority,” as Peter Hart, a longtime Democratic pollster, put it.

Come November, whichever party’s issue set is more dominant in the minds of the electorate is expected to have the upper hand.

“The Democrats’ message is, ‘Elect Republicans and the sky may fall!’” Paul Shumaker, a veteran Republican strategist based in North Carolina, said, referring to rhetoric around abortion and Trumpism. But he said that voters “see the sky is falling — all because of Joe Biden’s bad economy. The increase in prices at the grocery store is an everyday fact of life.”

Republicans are bullish on taking the House. Representative Elise Stefanik of New York, the chair of the House Republican Conference, predicted a “red tsunami” in an interview. “I think we can win over 35 seats, which would give us the largest majority since the Great Depression,” she said.

Republicans, in fact, need only a red ripple to take the gavel from Speaker Nancy Pelosi’s current threadbare 220-member majority. For Democrats to maintain power, they would need a near sweep of the battleground districts, winning roughly 80 percent of them, according to political analysts who rate the competitiveness of races.

As Dan Conston, who heads the Congressional Leadership Fund, the super PAC aligned with the House Republican leadership, sees it: If Republicans win every seat that Mr. Trump carried, plus every seat that Mr. Biden won by five percentage points or less, they will secure 224 seats, a narrow six-seat majority.

“The political environment has moved in multiple ways this cycle and has more contrasting issues that are keeping both sides engaged and energized,” Mr. Conston said.

It is Republican super PAC spending that has frightened House Democrats most in recent weeks.

“We always knew this would be tough,” Representative Sean Patrick Maloney of New York, chairman of the Democratic Congressional Campaign Committee, said in an interview. Of the super PAC cash deficit, he said, “We just need enough.”

In the Senate, the battlefield has been shaped by powerful crosscurrents and has swelled to as many as 10 states — and if a single state flips to the Republicans, they would control the chamber.

Republicans have improved their standing in several key Senate races — including those in Nevada, Pennsylvania and Wisconsin — by pummeling Democrats over crime. But those gains have been offset in part by the struggles of several Republican nominees, including those in Arizona and in Georgia, where Herschel Walker’s campaign has been engulfed by the allegation that he financed an abortion for a former girlfriend.

One of the most significant Senate developments came in New Hampshire, where Republicans nominated Don Bolduc in September despite warnings in Republican-funded television ads that his “crazy ideas” would make him unelectable. In a recent radio interview, Senator Rick Scott, the chairman of the National Republican Senatorial Committee, pointedly did not include New Hampshire among his party’s top five pickup opportunities. And late Friday, Mr. Scott’s group began canceling more than $5 million it had reserved there, saying it was redirecting the funds elsewhere.

Recruiting failures have hampered Senate Republicans throughout 2022, and Senator Mitch McConnell, the minority leader, complained over the summer about “candidate quality.”

But most Senate strategists now see control of the chamber hinging particularly on Nevada and Georgia, where Democratic incumbents are seeking re-election, and Pennsylvania, an open seat held by a retiring Republican. And whichever party wins two of those three would be strongly favored to be in the majority.

Both sides are still seeking to stretch the map. A Democratic super PAC just injected more money into North Carolina, and Republicans have talked up their chances in Colorado. Millions of dollars are funding ads focusing on Republican-held seats in Ohio and Florida, as well.

“This is the strangest midterm I’ve ever been a part of, because you have these two things in direct conflict,” said Guy Cecil, a veteran campaign operative who chairs the Democratic group Priorities USA. “You have what history tells us, and you have all this data that says it’s going to be a very close election.”

Looming over the political environment is the unpopularity of Mr. Biden. Polls show he has recovered from his lowest points over the summer after signing legislation that addressed climate change and senior drug prices. A dip in gas prices helped, too.

But his approval remains mired in the low 40-percent range, and gas prices began ticking back up even before the recent decision by Saudi Arabia and Russia to cut oil production.

Democrats have repeatedly framed the election as a choice and warned that Republican gains would usher in the return to power of Mr. Trump’s movement.

Representative Hakeem Jeffries of New York, chairman of the House Democratic Caucus, said in an interview that it was an urgent priority to “make it clear that it is an untenable situation to hand over the keys to the extremists in the other party.”

Ms. Stefanik, the No. 3 House Republican, accused Democrats of trying to distract voters.

Even more than Mr. Trump, abortion stands at the center of virtually all Democratic electoral hopes this year. Its persuasive power alarmed Republicans over the summer, especially after Kansans voted against a referendum that had threatened abortion rights in the state and Democrats outperformed expectations in some special elections.

Gov. Roy Cooper of North Carolina, the chairman of the Democratic Governors Association, said the breadth of the abortion decision had taken swing voters by surprise, despite years of warnings from advocates and predictions from Mr. Trump himself that his Supreme Court appointees would do just that. The shock, Mr. Cooper said, has not worn off.

“I don’t think anyone thought that after their testimony in committee in the U.S. Senate that they would actually vote to turn it on its head,” Mr. Cooper said of Trump-appointed justices.

Republicans have sought a delicate two-step on abortion, catering to a base demanding its prohibition and to the political center, which is largely supportive of Roe.

In Nevada, Adam Laxalt, the Republican Senate candidate, is broadcasting television ads proclaiming that no matter what happens in Washington, abortion will remain legal in Nevada, attempting to pivot voter attention back to crime and the economy.

“Over the last two years, Democrat politicians have done incredible damage to America,” one ad intones. “But one thing hasn’t changed: abortion in Nevada. Why do Democrats like Catherine Cortez Masto only talk about something that hasn’t changed? Because they can’t defend everything that has.”

Republican fortunes have improved in part through enormous spending by a super PAC aligned with Senator Mitch McConnell of Kentucky, which is funding a $170 million television blitz across seven states that started on Labor Day and is set to continue through the election.

Crime has dominated the Republican messaging in Nevada, Wisconsin and Pennsylvania, where the summertime edge held by the Democratic nominee, John Fetterman, over Dr. Mehmet Oz, the Republican nominee, has largely evaporated.

“Dangerously liberal on crime,” says one anti-Fetterman ad in Pennsylvania.

“This campaign weathered an unprecedented six weeks of attacks,” said Rebecca Katz, a senior strategist for Mr. Fetterman. “And not only are we still standing — we’re still winning.”

In a twist for this era of hyperpartisanship, voters could render a number of split decisions between governor and Senate contests in battlegrounds this fall.

In one recent crime ad, Dr. Oz, the celebrity physician, notably drew a distinction between Mr. Fetterman and Mr. Shapiro. He seemed to be searching for crossover Shapiro-Oz votes.