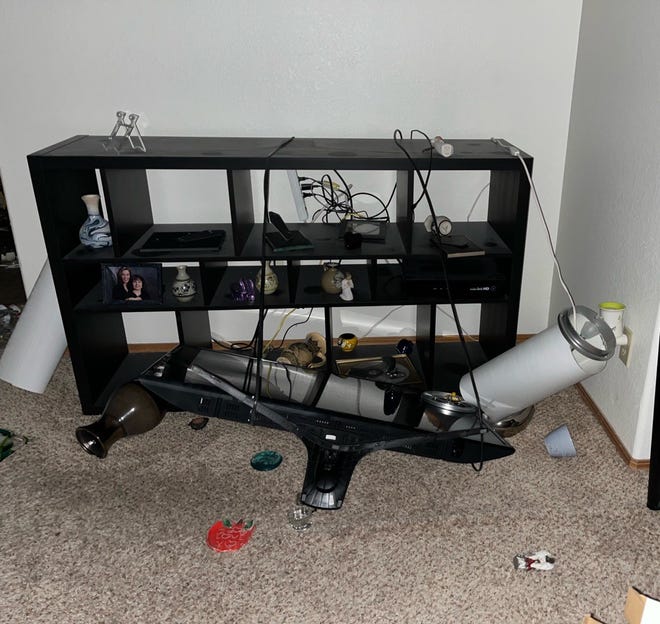 The temblor, which is the strongest earthquake the area has seen in years, also damaged infrastructure and cut off power to tens of thousands of homes and businesses around Humboldt County, about 250 miles north of San Francisco.

The Humboldt County Sheriff’s office said two people “died as a result of medical emergencies occurring during and/or just following the earthquake.”

Tuesday’s fatalities mark the first deaths stemming from an earthquake in California since one person died in 2019 during a 7.1 magnitude quake that rocked the city of Ridgecrest in California’s Northern Mojave Desert region.

The U.S. Geological Survey said the quake struck at 2:34 a.m. PT in Pacific Ocean waters about 7½ miles west of Ferndale at a depth of just over 16 miles. The city is about 19 miles south of Eureka, near the California and Oregon state line.

State officials said they closed one bridge into Ferndale that was damaged.

The USGS warned of “many” aftershocks, including some that could reach magnitude 4. More than two dozen aftershocks were recorded on the USGS website, most of which were less than magnitude 4.

What is an aftershock?:Learn about the smaller earthquakes impacting Northern California.

‘It could happen tomorrow’:Experts know disaster upon disaster looms for West Coast

The two area residents whose deaths were linked to Tuesday morning’s quake were 72 and 83 years old, according to Humboldt County Sheriff William Honsal.

Honsal said the deaths likely occurred because “their medical emergency happened at the moment of the earthquake and EMS could not get there in time to deliver them to the proper medical facility.”

One death happened in Rio Dell, and the location of the other death was still unclear, Honsal said.

A total of 12 people have reported injuries so far, and the number is expected to rise, Honsal said.

How far was the earthquake felt?

The quake was felt as far east as Redding, California, roughly 160 miles east of Ferndale, and as far south as the Bay Area, according to Mark Ghilarducci, director of the state’s office of emergency services.

The Humboldt County Sheriff’s Office announced reports of damage to homes and roads throughout the county, which has a population of about 136,000 people.

Officials identified one bridge, the Fernbridge, connecting Ferndale to U.S. 101, that sustained enough damage to prompt a closure, according to Tony Tavares, director of the state’s transportation agency.

In addition to Ferndale, most of the destruction took place in Rio Dell, Fortuna and Scotia in the Eel River Valley, state officials said.

Ghilarducci said at least one structure fire had been reported along with two homes that were “knocked off their foundations” or partially collapsed.

In the hours immediately after the quake, Pacific Gas & Electric Co. reported tens of thousands of customers without power in the area. By mid afternoon more than 57,000 people remained in the dark.

PG&E spokesperson Mayra Tostado told USA TODAY that the utility company has initiated its emergency response plan and that crews were responding to gas and electric hazards in Humboldt County.

“Our assessment could take several days,” Tostado said. “All customers are urged to use extreme caution around heavily damaged buildings.”

‘I’ve never felt anything like that in my life’

Diana McIntosh, 69, said the temblor woke her up inside her home in an apartment complex in central Humboldt County.

“It felt like north and south rocked back and forth, and it kept getting bigger and bigger. I heard banging, things crashing and glass shattering,” said McIntosh, who lives alone in her apartment off the freeway near the Pacific Ocean.

McIntosh, who said she has lived in the Eureka area for 65 years, called it the biggest earthquake she has ever experienced.

“I was screaming,” she said. “The way that it shook … I’ve never felt anything like that in my life.”

McIntosh said her home, where some furniture was not anchored to the walls, sustained damage.

“My water is brown. There is no electricity. It’s 60 degrees in my apartment and dropping,” she said.

A photo posted online by the California Department of Transportation showed State Route 211, which connects Ferndale with U.S. 101, buckled from the quake. The Ferndale Fire Department reported other roads were also closed in the area because of damage including Blue Slide Road, which runs parallel to U.S. 101, a major north-to-south highway stretching from Los Angeles to Washington state.

Another area resident, Caroline Titus of Ferndale, posted on Twitter, “The north/south shaking is very evident in what fell. This was our coffee station. Sorry for dark video. Power still out.”

Earthquake among strongest in recent memory

Tuesday’s 6.4 magnitude earthquake could be the most significant to hit California since July 2019, when a 7.1 magnitude quake struck the Ridgecrest area in Southern California, according to the state Department of Conservation. A 6.5 magnitude quake was recorded about 100 miles offshore near Ferndale in 2016.

In Northern California, the last notable quake was a  6.2 magnitude temblor that struck offshore in the Cape Mendocino area in December 2021.

What was the biggest earthquake in US history?

The biggest earthquake in modern history took place on March 27, 1964, when an earthquake of magnitude 9.2 took place in the Prince William Sound region of Alaska.

According to the USGS, the quake rupture started about 15½ miles beneath the surface, with its epicenter about 6 miles east of the mouth of College Fiord and 75 miles east of Anchorage.

It was also the second-largest earthquake ever recorded, next to the magnitude 9.5 earthquake in Chile in 1960.