Abba, The Crown and deep-fake entertainment 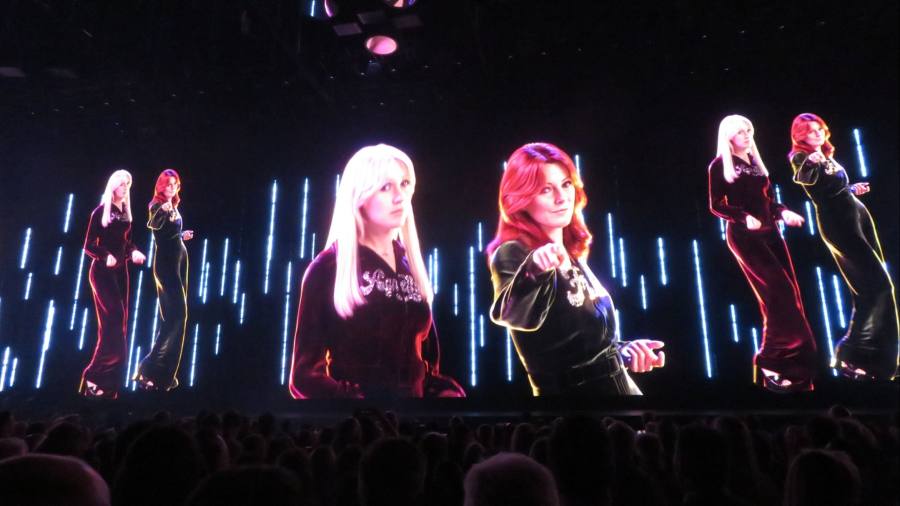 “How does it feel to have seen the future?”

So asked the woman behind the cash register as I picked out an Abba Voyage commemorative T-shirt. “That’s the future of entertainment,” she said of the show I’d just seen, her face all mystic and awestruck. “I guess so,” I replied as I handed over my card. She was probably right, but I felt less ecstatic than rueful.

Don’t misunderstand me: Abba Voyage, the live arena event currently occupying Pudding Mill Lane at the ends of east London, is nothing short of a miracle. In a dazzling technological regeneration, the Swedish supergroup has been reanimated, returned to 1977, and reborn as extraordinary “Abba-tars”. As a magic trick, the whole spectacle is completely dazzling. And although the figures have the occasional jolting syncopation of Sims characters (and the band’s voices and physical gestures are modelled on band members now in their seventies), the voyage is an eye-rubbing marvel.

Joining the audience in a lusty rendition of “Fernando” on a damp Monday night, I felt overwhelmed with happiness and nostalgia. I embraced the hen-night energy, danced in the aisles and channelled my inner Agnetha. My daughter, an Abba superfan, went hoarse from singing her lungs out. Chugging home on the Docklands Light Railway, I wondered if one can OD on serotonin.

Who needs actual bodies on a stage when you can build a convincing simulacrum?

Have I seen the future of entertainment, however? I rather hope I haven’t. Apparently music executives the world over are now planning holographic extravaganzas, and at upwards of £100 a ticket, the Abba Voyage business model will be wildly addictive. I can only imagine the 40mn Licks we might see from the Rolling Stones in the future. Not unlike the 3D mania that possessed filmmakers about 10 years ago, the concept of live performance is about to enter a new era.

As with so many things in our lives now, this is the age of deep-fake entertainment. Following the film industry’s acquiescence to the Marvel universe, and ubiquity of the gaming aesthetic, it was only a matter of time before even live performance became subject to techno manipulation. Who needs actual bodies on a stage when you can build a convincing simulacrum? Why bother wrecking your vocal cords over the course of a punishing residency when you can just hit play on a recording?

Harder to replicate though will be the mood of euphoria that only an Abba fan brings with them. I imagine the excitement for musical holograms will likely burn bright but will quickly fall out of favour. What remains more permanent, however, is how blurred our cultural reality is becoming. We are wary of how truthful our news might be (witness the misreporting over the missile strike this week in Poland). But deep-fake entertainment has now wiggled into every facet of culture.

Whether CGI, blue screen, holographic or simply pure fabrication, the boundaries between what is real or imagined are becoming muddled in the chopped salad of entertainment. It’s especially pernicious in programmes that present events as being factual history. The 90th series of The Crown arrived last week along with a volley of complaints about the series’ wildly fictitious diversions. Former prime minister John Major has vehemently denied having met King Charles to discuss the then prince’s succession frustrations. (He seemed a great deal less concerned by the casting of Jonny Lee Miller, who has lent that greyest of political leaders a disconcertingly sexy charisma). At this point in the Netflix drama, it seems rather pointless to bleat about misrepresentation. But it’s dismaying to realise that audiences care less and less for the truth in their fiction.

We seem to be caught in a cycle that places extraordinary value in making things “look” authentic. Whether it’s Dominic West dressing up in the right kind of tweeds, or Abba created in lasers, as long as everything looks the part, we seem less concerned by the substance. On TikTok, I watch compare-and-contrast videos in which you can watch the dramatic restagings of The Crown (and other “true stories”) next to videos of contemporary live footage. The impersonations, the wardrobes and intonation are so good that you scarcely know which is the real one. Entertainment has become a bizarre hybrid in which the gap between virtual and real has shrunk to a hair’s width.

But while many are now exploring the limits of what can be done to bend an audience’s perception, there is also a growing contingent who still crave the corporeal and real.

As I write, I am sitting in a presale queue in the hope of snagging a ticket for Blur, who will reunite for a single concert at Wembley Stadium next summer. The band last played a full set together in 2015, and for years a reunion has seemed unimaginable. Pulp have also announced a string of dates after nearly a decade of not playing together. That the bands have suddenly announced dates next year has set a million Brit-pop pulses aflutter. To see Damon, Alex, Graham and Dave on a stage again? That really would be a miracle.