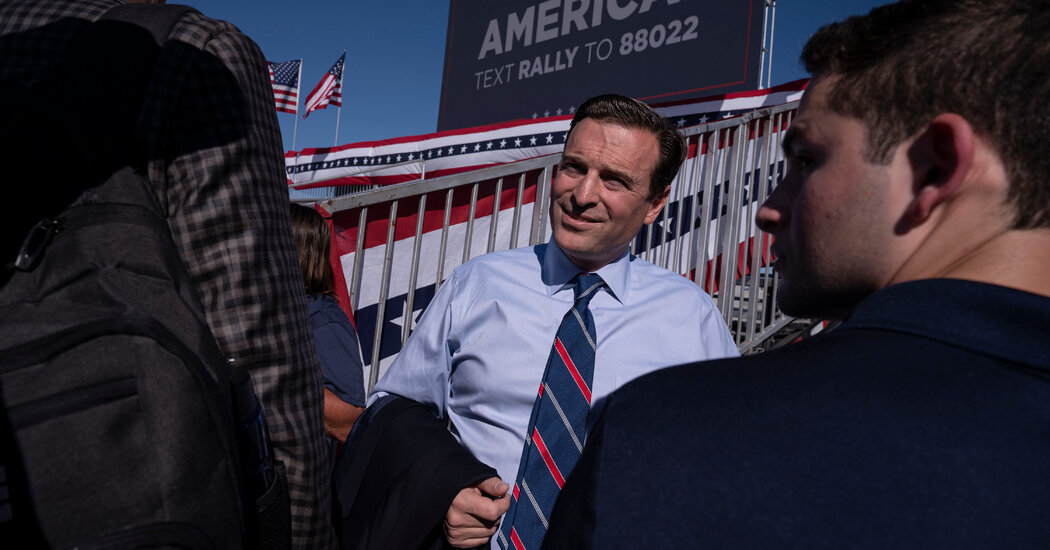 Adam Laxalt, the Republican running for Senate in Nevada, built a political career on his family name, casting himself as the heir to his grandfather, a towering figure in the state who served as governor and one of its senators.

Now 14 of his relatives are trying to put an end to that career.

On Wednesday, they endorsed Mr. Laxalt’s rival, Senator Catherine Cortez Masto, the Democratic incumbent, saying that she “possesses a set of qualities that clearly speak of what we like to call ‘Nevada grit.’”

“She has always put Nevada first — even when it meant working against her own party’s policies,” they wrote, praising the senator for fighting off a Biden administration proposal to impose taxes that would have hit local ranchers and the state’s mining industry.

The race is tight, with most of the latest polls showing Mr. Laxalt up by a sliver. Without mentioning him by name, Mr. Laxalt’s family members argued that Ms. Cortez Masto would serve Nevada far better than their relative, who has emerged in recent years as a die-hard Trump loyalist eager to push the former president’s stolen-election lies.

Mr. Laxalt’s campaign did not immediately respond to a request comment on the endorsement. Sigalle Reshef, a spokeswoman for the Cortez Masto campaign, said in a statement that the senator “appreciates their support in this race” and noted that a number of prominent Republicans had crossed party lines to endorse her.

The hard-right politics of Mr. Laxalt, 44, a former state attorney general, stand in sharp contrast to the relative moderation of his Republican grandfather, Paul Laxalt, who died in 2018, and Wednesday was not the first time family members have sought to hobble his political ambitions.

Back in 2018, when he ran for governor, a dozen members of Adam Laxalt’s family decided they could no longer quietly stand by what they saw as his abuse of the family patriarch’s good name. Writing in the Reno Gazette Journal in October 2018, they decried Mr. Laxalt as a carpetbagger, denouncing what they described as his “ethical shortcomings” and “servitude to donors and out-of-state interests that puts their concerns ahead of real Nevadans.”

“For those of us who were actually raised in Nevada, it’s difficult to hear him continue to falsely claim that he was raised in Nevada or has any true connections to Nevadans,” they wrote.

Though he was born in Reno, Mr. Laxalt was raised by his mother in Washington, D.C., where he attended private schools and earned undergraduate and law degrees from Georgetown University.

He returned to a few years before his successful campaign for attorney general in 2014. Once in office, he proved eager to pick fights with more moderate Nevada Republicans on issues like immigration and abortion, and he was caught on tape pressuring state gambling officials on behalf of one of his biggest donors, the casino magnate Sheldon Adelson.

“Aside from the occasional short visit, Adam never knew the state or its people,” his relatives wrote in 2018. “Perhaps if he had, he would stand for Nevada’s values rather than for those of his out-of-state donors.”

Their essay was published weeks after six brothers and sisters of another hard-right Republican, Representative Paul Gosar of Arizona, recorded videos saying their sibling was not fit for office. While Mr. Gosar went on to win his race, Mr. Laxalt fell short.

The Laxalt family members who endorsed Ms. Cortez Masto on Wednesday are clearly hoping the same happens this year.

Some have even put money on it: At least three have donated to Ms. Cortez Masto’s campaign.