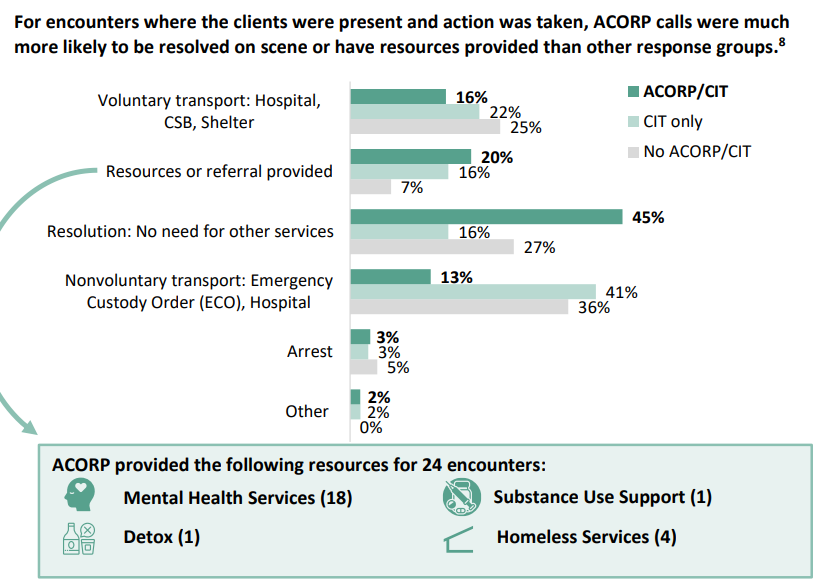 A program pairing police with mental health professionals to better handle people in a mental crisis is finding early success in Alexandria, Virginia.

A program pairing police with mental health professionals to better handle people in a mental crisis is finding early success in Alexandria, Virginia, according to a report commissioned by the city.

The Alexandria Co-Response Program, or ACORP, is a collaboration between the Alexandria Police Department and the Department of Community and Human Services. The one ACORP team is comprised of an officer and a behavioral health clinician.

The report found that the ACORP team resolved problems on scene with no need for other services 45% of the time. During that five-month span, officers that were trained in crisis intervention resolved cases 16% of the time at the scene. Officers with no training resolved behavioral health calls at the scene 27% of the time.

ACORP was also less likely to send people to the hospital involuntarily. Omni found that the team only did this 13% of the time. Meanwhile, CIT officers and non-trained officers involuntarily transported people 41% of calls and 36% of calls respectively.

CIT officers were able to voluntarily transport people to the hospital or shelter 22% of the time; non-trained officers had higher rates of voluntarily admission at 25%. ACORP got 16% voluntary admission.

On one call, an Alexandria man was suicidal and armed with a knife. Because he was armed, several other units responded with ACORP.

During de-escalation, the man said he did not trust police and had bad experiences with them, but  that he would talk to the mental health professional alone.

Given the man was still a threat, the ACORP police officer stayed in the room and slowly, the other officer left and waited outside. The team was able to get him to hand over the weapon and voluntarily go to the hospital for further assessment and treatment.

The report concluded that ACORP saw early successes, especially in improved outcomes for people and diverting them from arrest, and better resource allocation. Omni suggested better training for call-takers in order to determine behavioral health calls, and more teams to handle those calls.

While ACORP now is only made up of one police officer and one mental health clinician, the city’s new budget provides funding for two more teams.

Tomorrow evening we will receive an external evaluation of this new program, which has diverted 71% of eligible calls from arrest. pic.twitter.com/m9YybeQRzy

Get breaking news and daily headlines delivered to your email inbox by signing up here.

© 2022 WTOP. All Rights Reserved. This website is not intended for users located within the European Economic Area.