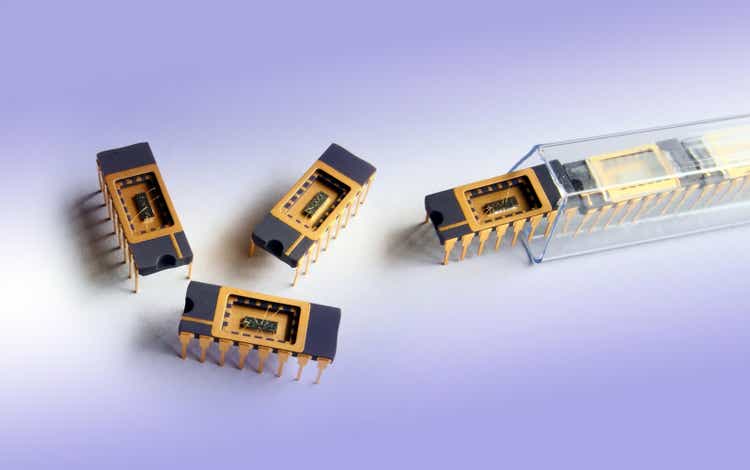 Amkor Technology (NASDAQ:AMKR) has seen lots of volatility lately. The stock is getting dragged around by forces that hold opposing views. On the one hand, the stock is facing downward pressure from the perception that semiconductor demand is getting weaker, especially with recent downgrades in earnings outlooks from industry heavyweights. On the other hand, the stock is benefiting from trading at low valuations and strong guidance with AMKR doing a good job managing the various headwinds out there, in part with the aid of rising industry interest in advanced packaging. There is still a case to be made in favor of long AMKR. Why will be covered next.

AMKR is getting bounced around

AMKR has seen its stock drop this year, similar to most companies out there. However, it’s worth mentioning that AMKR has done better than most semis in this regard. For instance, the iShares PHLX Semiconductor ETF (SOXX) has lost 33% YTD. In comparison, AMKR has lost 24% YTD. AMKR has outperformed in that sense.

Still, the stock has been very volatile lately. The stock lost about 25% in June, only to gain it all back and then some with an almost 50% gain in July. However, the stock has reversed course and it is now heading lower once more. The stock has lost close to 20% since early August. All this happened in the span of about three months as shown in the chart below.

The stock is bouncing around, held hostage to changing headlines. For instance, the stock suffered when COVID-19 lockdowns were imposed in China, something that would make its way back to AMKR’s earnings reports. The stock rebounded with the lifting of the restrictions, giving AMKR a chance to return business activities to normal and an improvement in quarterly results.

However, the most recent decline in the stock coincided with weak forecasts from industry heavyweights like Micron (MU) and Nvidia (NVDA). Both cited weakening chip demand as justification for lowering their earnings outlook. The double whammy caused semis to sell off, AMKR included.

The belief is that reduced demand for semiconductors will result in reduced demand for OSAT services from the likes of AMKR. On the other hand, it’s worth pointing out that while it is admittedly harder, individual names can still prosper in an environment where overall demand for semiconductors is down. Not all companies rely on OSAT services after all. Some companies rely on their own in-house test and packaging for their products.

For instance, a shift in consumer demand towards products from fabless designers utilizing OSAT services and away from IDMs that depend on insourcing could create additional business opportunities for a company like AMKR. This is where something like advanced packaging could come in and make a difference. AMKR can create added value to entice customers to make the switch in order to benefit. AMKR is not necessarily doomed if or when a downturn arrives. It depends on how severe conditions get, assuming they even get there in the first place.

Earnings growth is holding up at AMKR

Part of the reason why AMKR has not sold off as much as some of the other semiconductor names out there is because AMKR has yet to report a significant deterioration in its earnings outlook like the semis mentioned earlier. On the contrary, growth is expected to pick up. The lifting of restrictions in China and a return to normal output levels in Q3 helps in this regard.

However, the numbers in Q2 did take a hit from lockdowns in China. Q2 revenue declined by 5.8% QoQ, but it increased by 7% YoY to $1,505M, a new high for the second quarter. Note that AMKR missed expectations for the top line, but this was due to AMKR resuming production later than expected in China, resulting in revenue that was less than expected.

Margins declined mostly due to a lower utilization rate as a result of production facilities being shut down in China. Nevertheless, EPS remained unchanged YoY at $0.51, thanks to contributions from non-operating income. EBITDA was $302M in Q2 FY2022, up from $295M in Q2 FY2021. AMKR finished with $1.1B in cash and short-term investments, offset by $1.1B in total debt. The ratio of debt to EBITDA was 0.8x. The table below shows the numbers from Q2 FY2022.

While AMKR acknowledges the reports of weakness in certain segments of the semiconductor market, demand remains healthy, thanks in large part to advanced packaging. From the Q2 earnings call:

“Demand for our technology and services remains robust, driven by our leadership position in advanced packaging supporting 5G, automotive, high performance computing and IoT. Although, we observe microeconomic headwinds and some weaker market forecast in some segments, we believe the long-term growth drivers for the semiconductor industry remain in place. And we have confident our strategic focus and leadership position in key semiconductor markets will continue to drive future growth.”

A transcript of the Q2 FY2022 earnings call can be found here.

AMKR is on sale

Another reason why AMKR has not sold off as much as other semis has to do with valuations. Unlike other names with valuations that are up in the skies, AMKR trades at a discount, whether in comparison to the sector median and to its own 5-year average. For instance, current analyst estimates project FY2022 EPS of $2.92-3.10 and FY2023 EPS of $3.10-3.30. AMKR thus trades at 6 times forward earnings with a trailing P/E of 7. AMKR is currently trading at significantly lower multiples than it usually does. The 5-year averages are 23x and 15x respectively. In terms of the sector median, it’s 21x and 22x respectively. AMKR trades at lower valuations than most semis out there.

It’s not easy sticking with semiconductor stocks. Many semis are still growing strong, as is the industry as a whole, but there’s no denying that semis have done poorly in 2022, even underperforming against other stocks. A number of headwinds have popped up that have weighed on stocks, semis included. These include a weakening in the global economy, rising inflation and changes in monetary policy.

Semis have also been negatively impacted by headwinds specific to the sector. The semiconductor industry is still growing, but it is also slowing down. Growth will be less in 2022 than it was in 2021 and it is projected to be even less in 2023. In addition, more and more companies are issuing weak forecasts.

For instance, Samsung is the global leader in terms of monthly wafer starts and it too joined the ranks of companies predicting tough times for the semiconductor industry. All these reports are dragging down other names in the industry, even if they themselves are doing fine. AMKR falls into this category.

AMKR has yet to experience the weakness that has affected other semis. On the contrary, AMKR is expected to post record revenue and earnings in its next quarterly report. It’s possible AMKR may see a deterioration in business conditions in upcoming quarters, but there is little if any of it at the moment.

However, AMKR trades like a stock that is destined to experience a deterioration in the top and the bottom line. The valuations AMKR trades at makes this clear. On the one hand, AMKR is reaching record highs in terms of the top and the bottom line with no signs of an imminent downturn. On the other hand, the stock is trading like the downturn is already here, which is why the stock is available at much lower multiples than it usually goes for.

I am bullish AMKR as mentioned in a previous article. If anyone is looking for a quick payoff, then a stock like AMKR is probably not it. The stock is likely to remain volatile as headwinds abound. The semiconductor market is likely to keep slowing down due to various headwinds, including a worsening economy in many parts of the world. Longs should brace themselves for short-term setbacks.

AMKR looks better for the long term. The semiconductor industry is probably due for a correction after the boom in recent years, but it should continue to grow in the long run. Picking stocks with an eye towards the future makes sense from that standpoint, especially if they can be obtained on sale at a discount. As one of the leading providers of OSAT services, AMKR is well placed to grow along with rising adoption of advanced packaging in the industry.

The balance sheet is in good shape. Multiples are such that a fairly sizable downturn in earnings is already priced in, which could make AMKR a bargain if the downturn does not arrive as expected or is less severe than anticipated. AMKR still has a shot at outperforming with the aid of advanced packaging, especially if the downturn is not as bad as feared. Bottom line, if someone is in it for the long haul, then there is more to like than not to like with AMKR.