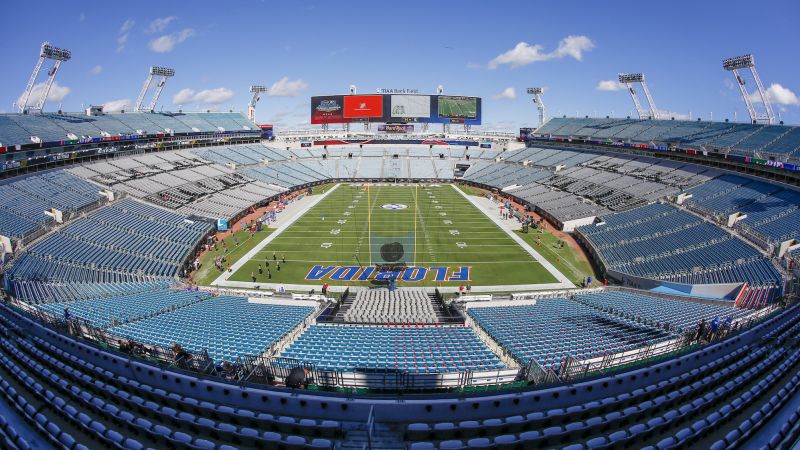 Officials in the Jacksonville, Florida, area condemned multiple antisemitic messages that appeared in public spaces this weekend including a football stadium, highway overpass and downtown building.

An antisemitic message referencing rapper Kanye West was seen scrolling on the outside of TIAA Bank Field in Jacksonville during the Georgia-Florida college football game on Saturday, according to video shot by a relative of Vic Micolucci, a reporter for CNN affiliate WJXT.

In the video, the words “Kanye is right about the jews” are visible scrolling across the exterior of the stadium structure, referencing recent antisemitic comments from the rapper Ye, formerly known as Kanye West.

Horrible to see that someone projected an anti-Semitic message on to TIAA Bank Field at the end of the sold-out Georgia-Florida game. A relative sent this to me. It’s in reference to comments Ye (formerly Kanye West) made recently.

This hate has to stop. Period. pic.twitter.com/kBKYUx7hIh

CNN has reached out to the Jacksonville Sheriff’s Office and TIAA Bank Field for comment.

In other videos circulating on social media, the same message was also visible on at least one building in Jacksonville on Saturday night.

And on Friday, banners were also visible from a highway overpass on Interstate 10 in Jacksonville, according to a tweet from a local reporter. They were also referenced in a statement by Florida Agricultural Commissioner Nikki Fried.

The banners read “End Jewish Supremacy in America” and “Honk if you know it’s the Jews.”

The language in the scrolling messages in Jacksonville mirrors banners that were hung from a freeway overpass in Los Angeles last weekend by a group appearing to make Nazi salutes.

“The first step is to ensure we do not normalize this behavior,” Fried said. “Do not normalize Antisemitic messages above a freeway, or anywhere else.”

The Jewish Federation and Foundation of Northeast Florida has “condemned and is outraged” by the multiple antisemitic events.

“We are harnessing our outrage into positive action. The Jewish Federation and Foundation has been in communication with the FBI, the Jacksonville Sheriff’s Office, and the St. Johns Sheriff’s office. We will continue to work with them in ensuring the safety and security of our community,” the group said in a statement.

“The rhetoric we have seen and heard in the last few weeks is unnerving and a scare tactic. However, our largest concern is that even one person will see this as a call to action and repeat what we witnessed in Pittsburgh exactly four years ago this weekend,” the Federation said.

Pittsburgh was the site of the deadliest attack of Jewish people on American soil, when on the morning of October 27, 2018, a man stormed the Tree of Life synagogue and killed 11 people.

US Rep. John Rutherford, whose district includes Jacksonville, said in a statement on Twitter, “There is absolutely no room for this sort of hate in Florida. I continue to stand in support of the Jewish community in Jacksonville and across the nation.”

In a tweet on Sunday morning, Jacksonville Mayor Lenny Curry said the city is made better because of its diversity.

“Those who spread messages of hate, racism and antisemitism will not be able to change the heart of this city or her people,” Curry wrote in the tweet. “I condemn these cowards and their cowardly messages.”

“The University of Florida and the University of Georgia together denounce these and all acts of antisemitism and other forms of hatred and intolerance. We are proud to be home to strong and thriving Jewish communities at UGA and UF, and we stand together against hate,” the statement said.

Antisemitic incidents in the United States have been on the rise for years, with 941 incidents in 2015 and 2,717 tracked in 2021 by the Anti-Defamation League.