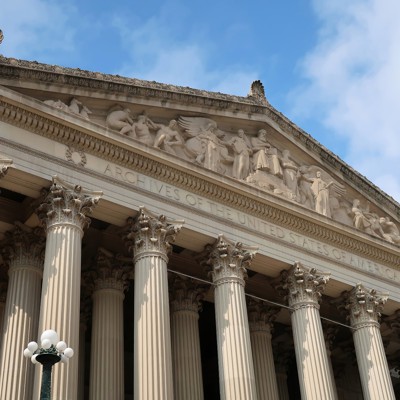 A Senate confirmation hearing which lawmakers described as a traditionally “sleepy” event took a contentious turn last week as defenders of former President Donald Trump seized on the moment to attack the FBI search of Mar-a-Lago.

The partisan drama came during a confirmation hearing for Colleen Shogan, who would serve as the next National Archivist of the United States if confirmed. During the hearing, Sen. James Lankford (R-Okla.), a member of the Senate Homeland Security and Governmental Affairs committee, called attention to the National Archives and Records Administration’s involvement in the search and seizure of records from the former president’s Florida estate, including nearly 100 classified documents.

Lankford called the FBI search “an absolutely unprecedented step” and noted that it occurred following “an initial request from the National Archives records.”

“Obviously, the current nominee was not the archivist at that point and can’t answer the questions from before,” the senator said. “But there’ll still be a lot of questions about transparency and what occurs for an agency and an entity that is responsible for holding records and making those records publicly available.”

The search took place at Trump’s private residence and club in August following a lengthy back-and-forth between NARA and the former president’s team, in which the agency repeatedly requested records that should never have left the White House. Under the Presidential Records Act, administrations are required to send all documents to the national archives – but NARA later discovered that Trump had covered records in his possession on the Florida estate.

Lankford and other Republicans questioned whether Shogan could serve as a nonpartisan leader of the records administration as Democrats continue to request further information from the agency about the records in Trump’s possession, citing her past academic research articles that appeared arguably unfavorable towards several former Republican presidents.

But Shogan, a member of the White House Historical Association and former senior executive at the Library of Congress, cited years of nonpartisan government service and noted how she has worked under both Trump and President Joe Biden.

“I am confident I would be able to work with President Trump and his staff. I have worked with him in the past, as you noted, at the White House Historical Association,” Shogan said, adding that her team “worked very effectively” with both the former president and his wife, former first lady Melania Trump.

Shogan said that, if confirmed, her first trip as Archivist  would be to the St. Louis facility where NARA employees are working to reduce a backlog of nearly a half-million requests for veterans records.

“I view this as the most important discrete problem facing me, if I am confirmed as Archivist of the United States,” Shogun said. “This issue is very personal for me. I have many veterans in my family, so I understand its importance.”

Additionally, Shogan previewed “the development of a new technology system that will enable the receipt of all digital records.” Federal agencies are facing a deadline at the end of this year, under a 2019 memo from the White House and NARA, to manage all their permanent records in electronic format. NARA needs new technology to support the accession of these records. She added: “I look forward to working on the development of that IT system, so that it can really be the guidepost for NARA’s future.”