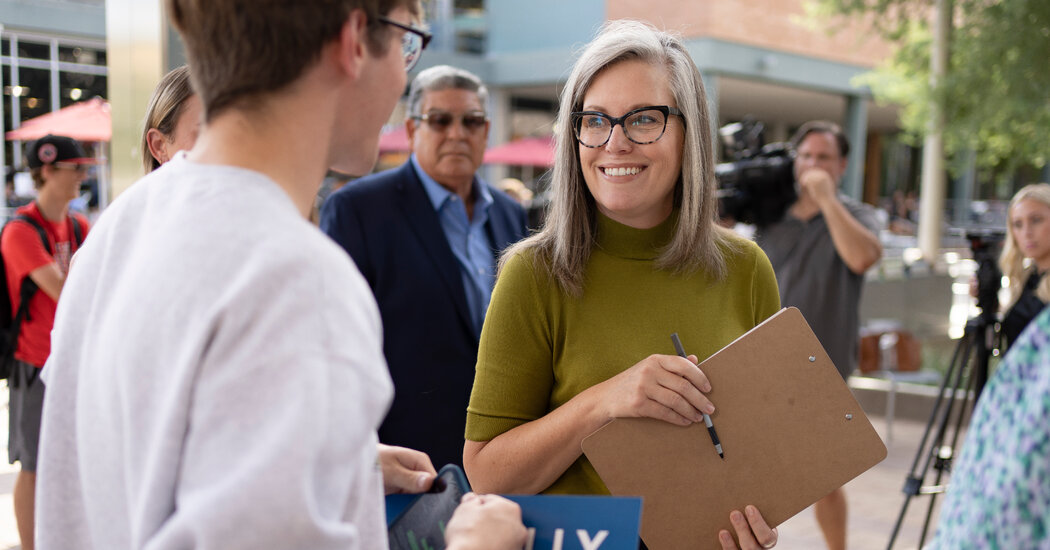 There will be no debates in one of the most competitive governor’s races in the country — between Katie Hobbs, the Democratic secretary of state of Arizona, and Kari Lake, a former TV news anchor endorsed by Donald J. Trump — because Ms. Hobbs has refused to participate, arguing that Ms. Lake would create a “circus.”

In what might be the closest they come to a debate, they were interviewed back-to-back on “Face the Nation” on CBS on Sunday, with a focus on immigration and abortion.

The host, Major Garrett, pressed Ms. Lake on her proposal to create an interstate compact in which Arizona and other states would make immigration arrests independent of the federal government, and Ms. Lake defended it in incendiary fashion, saying the Biden administration had abdicated its duty to protect states from invasion.

She cited Article I, Section 10 of the Constitution — which says that without congressional consent, states cannot “enter into any agreement or compact with another state, or with a foreign power, or engage in war, unless actually invaded, or in such imminent danger as will not admit of delay” — and claimed that Arizona met the conditions of the clause.

Ms. Hobbs, interviewed afterward, said Ms. Lake’s proposal was “empty rhetoric” that “would do absolutely nothing to increase border security” but “would bring untold levels of chaos into our state.” She said she agreed that the Biden administration needed to take stronger action on border security, but blamed a series of presidents and Congresses under both parties for failing to pass comprehensive immigration reform.

On abortion, Ms. Lake accused Ms. Hobbs of supporting the procedure “right up until birth” — a common, and misleading, Republican claim against Democrats — and falsely claimed, “If you are in the hospital in labor, the abortionists are for giving you an abortion if you desire one.”

Ms. Hobbs reiterated that she does not support a gestational limit on abortion, saying, “I support leaving the decision between a woman and her doctor and leaving politicians entirely out of it.” However, even in states like Colorado that have no gestational limit, doctors do not perform abortions on demand until the moment of birth.

“Late-term abortion is extremely rare, and if it’s being talked about, it’s because something has gone incredibly wrong in a pregnancy,” Ms. Hobbs said. “A doctor’s not going to perform an abortion late in a pregnancy just because someone decided they want one. That is ridiculous, and she’s saying this to distract from her incredibly extreme position.”

Ms. Lake has expressed support for Arizona’s near-total abortion ban, which predates Roe v. Wade and is blocked as courts assess it. On Sunday, she focused on a more recent law that bans most abortions after 15 weeks, saying, “We need to draw a line somewhere.”

Here’s what else happened on the Sunday talk shows.

A claim that Herschel Walker, the Republican Senate candidate in Georgia, paid for an ex-girlfriend’s abortion in 2009 — and the woman’s subsequent assertion that he also wanted her to terminate a second pregnancy in 2011 — upended Mr. Walker’s campaign. But Republicans have circled the wagons around him, and that played out on the Sunday shows.

Comments from Don Bacon, a Republican congressman facing a competitive race in Nebraska, were representative of the G.O.P. line. On NBC’s “Meet the Press,” Mr. Bacon was asked if he still supported Mr. Walker and replied, “I sure do, more for the policy positions he’s going to take.”

Asked by the host, Kristen Welker, whether this suggested Republicans were “willing to win at all costs,” Mr. Bacon said, “I think people make mistakes, and if people acknowledge them and ask for forgiveness, none of us are perfect.” (Mr. Walker has not done that; he has denied the claims, though they are backed up by extensive documentation.)

Scott Jennings, a former aide to President George W. Bush who is now a conservative commentator, stated the calculus plainly on CNN’s “State of the Union.”

“At the end of the day, the country’s in the ditch, and who are you going to call? The person who’s enabled it or the person who’s going to push back on it? That’s how many are going to analyze it,” Mr. Jennings said, adding later: “When the Senate control is this close, there’s nowhere else to go. This is part of the final matrix for Republicans if they hope to get the majority.”

An interview on “Fox News Sunday” with Stacey Abrams, the Democratic nominee for governor of Georgia, touched on a range of subjects, including the reports about Mr. Walker. She accused her opponent, Gov. Brian Kemp, of hypocrisy for opposing abortion but not denouncing Mr. Walker.

At one point, the host, Shannon Bream, asked Ms. Abrams to respond to a video clip of Kanye West claiming that “there’s more Black babies being aborted than born in New York City.” (This is not true according to city records.) Ms. Abrams affirmed her support for legal abortion and emphasized the disproportionate rates of maternal mortality among Black women, saying, “The right to our medical care should be sacrosanct.”

Ms. Bream also asked Ms. Abrams to respond to a recent ruling in which a federal judge found that Georgia’s new voting restrictions — challenged by Ms. Abrams’s organization, Fair Fight Action — “violate neither the Constitution nor the Voting Rights Act.”

Ms. Abrams suggested that the judge’s hands had been tied by a Supreme Court ruling last year that weakened the Voting Rights Act. “That’s the reason that I’m pushing so hard for the Voting Rights Act to be restored and expanded, but it’s also why I’m running for governor,” she said.

In case you missed it …