As Election Day approaches, Trump-DeSantis 2024 rivalry seeps into the public 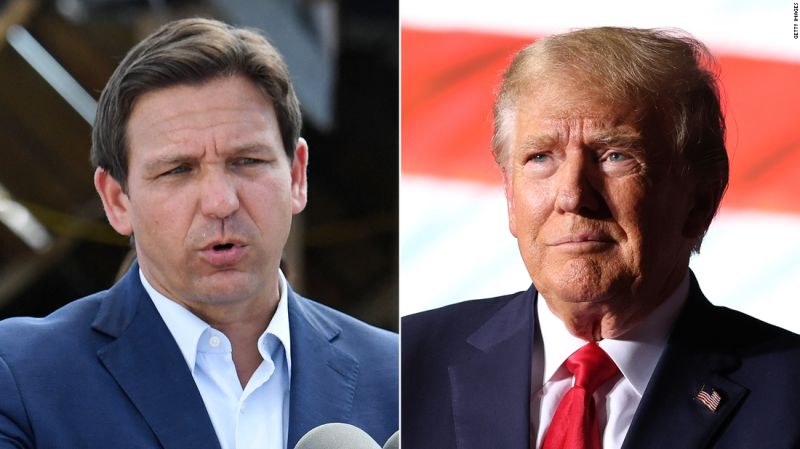 When Election Day arrives in Florida, Donald Trump will vote for a Republican whose political demise he may soon find himself plotting.

Months after Trump told The Wall Street Journal he would support Florida Gov. Ron DeSantis’ bid for reelection, the former President and his home-state governor appear increasingly likely to collide in a heated 2024 presidential primary. While neither has formally announced a presidential campaign, both have taken steps in the closing days of the 2022 cycle to cement themselves as team players and kingmakers – locking horns in those pursuits.

“We have a rift with Trump. Big shocker,” said a source close to the DeSantis campaign, who was granted anonymity to speak candidly. “It’s no secret that things are cool between [Trump and DeSantis] right now. They’re not punching each other, but we’re not helping them and they’re not helping us.”

A rivalry that had mostly existed behind the scenes burst into public view this week after DeSantis recorded a robocall endorsing Republican businessman Joe O’Dea, an underdog in the Colorado Senate race who vowed earlier this month to “actively campaign” against Trump if he mounts a third presidential bid. While the Florida governor has supported other Republican midterm candidates, none of them have been as explicitly critical of Trump as O’Dea.

The move did not go unnoticed by the former President, who has spent months griping to aides about DeSantis and amplifying claims that he would handily beat the governor in a Republican primary.

The first signs of a strain in Trump’s relationship with DeSantis began last fall amid the Florida Republican’s soaring popularity and thinly veiled criticism of Trump’s Covid-19 policies as president.

Despite efforts by allies of both men to defuse tensions, their strained relationship has persisted for months and now appears at a crescendo as Trump readies a post-midterm 2024 campaign announcement and DeSantis barrels toward reelection with potentially historic support from Florida Hispanics.

“Trump has to be concerned because DeSantis has built an unprecedented base in the Hispanic community,” said one Florida-based Republican consultant.

DeSantis has also spent the past year making inroads with deep-pocketed Republican donors and laying the groundwork for a potential 2024 campaign launch next year, according to allies, some of whom said he doesn’t want to rush his potential entry into what is likely to be a crowded primary. It’s those overt steps toward a White House bid that have most irritated the former President.

Days after Trump slammed the Florida governor for endorsing in the Colorado Senate contest, DeSantis committed another cardinal sin in the eyes of the former President when he once again refused to rule out a presidential run if Trump is a candidate. During a Monday debate against his Democratic opponent, Charlie Crist, DeSantis declined to commit to serving a four-year term if reelected, standing in silence as his opponent repeatedly raised the subject. Privately, Trump allies gloated over the debate, questioning DeSantis’ ability to endure a debate against Trump.

“DeSantis did fine for a race he’s crushing,” said one Republican operative who has worked with both men. “It’s a whole different ballgame when he’s on a stage next to Donald Trump. Trump has a way of very effectively getting under people’s skin, especially on the debate stage.”

Other Republicans dismissed such takeaways as premature – even unfair – given DeSantis’ clear edge in his reelection race and Trump’s inimitable debate style.

“I don’t think that debate mattered at all,” said Brian Ballard, a Florida-based Republican consultant who maintains close ties to both Trump and DeSantis.

“Donald Trump on the debate stage is the most unique political animal in 100 years. Everybody got decimated by him [in 2016],” Ballard added. “I believe Ron DeSantis can hold his own against anybody, but Donald Trump is his own character.”

For months, Trump has worked to cast himself as the automatic front-runner in a contested 2024 primary while asking his own pollsters to identify whether DeSantis or others pose a serious threat.

In perhaps his most direct jab at DeSantis yet, the former President reposted a video to his Truth Social site this week in which former Fox News host Megyn Kelly confidently predicted that Trump would emerge on top in a contest against DeSantis. Kelly repeatedly sparred with Trump during his 2016 presidential campaign, both as a debate moderator and prime-time commentator, but in the video shared by Trump she suggested the former President’s base remains firmly behind him.

“You really think the hardcore MAGA is going to abandon Trump for DeSantis? They’re not. They like DeSantis, but they don’t think it’s his turn,” Kelly says in the clip, adding that “the hardcore Trump faithful is unshakable [and] if forced to choose, they will choose Trump.”

While some Republicans agree with Kelly, others are looking for new blood, exhausted by Trump’s unending legal battles and the media spectacle surrounding him.

Those close to DeSantis say he is content, for now, to let his election performance do the talking for him. Through mid-October, two political committees behind his reelection effort had spent more than $80 million trying to engineer a lopsided victory that would further bolster his resume and deliver an overwhelming mandate for his agenda.

But in conversations with donors, DeSantis allies say he is far less dismissive these days when questioned about a White House bid than he was six months ago – something Trump allies have brought to his attention, further irritating him.

“People are always talking about, wondering about presidential elections in the future and all this stuff,” DeSantis said at a rally Wednesday. “People are concerned about who’s running the country next because no one knows who the hell is running the government now.”

On the campaign trail, the Florida governor has been beta-testing messages that could set him apart in a presidential primary either with or without Trump as a competitor. He has touted his record on the economy, his management of the pandemic and his battles with businesses, Big Tech and school districts over “woke ideology.” Some say the more he can lean into his accomplishments as governor, the less likely he is to draw comparisons with Trump even as he mimics elements of the former President’s political style – from his hand gestures to his public war on the media.

“If I were advising him, I would tell him to ignore that stuff. You’re Ron DeSantis 1.0, not anything 2.0,” said Adam Geller, a former Trump campaign pollster and Republican strategist.

But Trump rallying voters in DeSantis’ state on November 6, two nights before the election, serves as a reminder of how easily he still commands GOP voters. Among Florida Republican operatives, the timing and location of Trump’s event has raised eyebrows. There are Senate battlegrounds considerably more competitive than Florida, where Rubio is favored to defeat Democratic Rep. Val Demings, and neither party has committed significant resources to the state in the closing weeks of the race.

In announcing the visit, Trump once again claimed credit for DeSantis winning the governor’s mansion through “a historic red wave for Florida in the 2018 midterms” with the former President’s “slate of endorsed candidates up and down the ballot.” But Trump also preemptively took ownership of DeSantis’ reelection, saying he had “molded the Sunshine State into the MAGA stronghold it is today.”

A person briefed on the matter said the prospect of a Florida rally was first raised during a phone call between Trump and Rubio following the Florida Senate debate earlier this month. Since the rally is being organized by Trump’s political operation, any effort to involve DeSantis would have likely come from the former President’s orbit. But that did not happen, according to multiple sources familiar with the matter.

“The Senator and President Trump discussed holding a rally in Florida, like he’s doing for Senate races across the country,” said Elizabeth Gregory, a Rubio campaign spokesperson.

Miami is also home to several vibrant Latino communities that shifted to the right under Trump and have continued to trend red in the two years since he left office. Trump will land in the city just before Republicans are poised to have their best electoral showing in Miami-Dade County since Jeb Bush won a second term in 2002.

“We’re potentially going to see Florida Republicans win Miami-Dade County, and it’s pretty clear Trump’s trying to get down there to take credit,” the consultant said.

DeSantis’ campaign didn’t ask to join the program for the Trump rally once it was announced, a source told CNN.

Like Trump, DeSantis has also tried to ascribe greater meaning to Florida’s transformational shift from a purple battleground into a reliably red state. On Wednesday, he told supporters that a big win on Election Day “will send a loud message, I think, across the country to governors in our own party” to follow his example in their states.

But any tension over who deserves credit for engineering that success is unlikely to matter until after November 8, said Tim Williams, a former Florida GOP campaign strategist.

“As far as the midterms go, that’s a train that’s approaching so quickly that this Trump-DeSantis feud isn’t going to get in the way of it,” Williams said.