As the U.K. mourns Queen Elizabeth II, here are some symbols in the events and what they represent 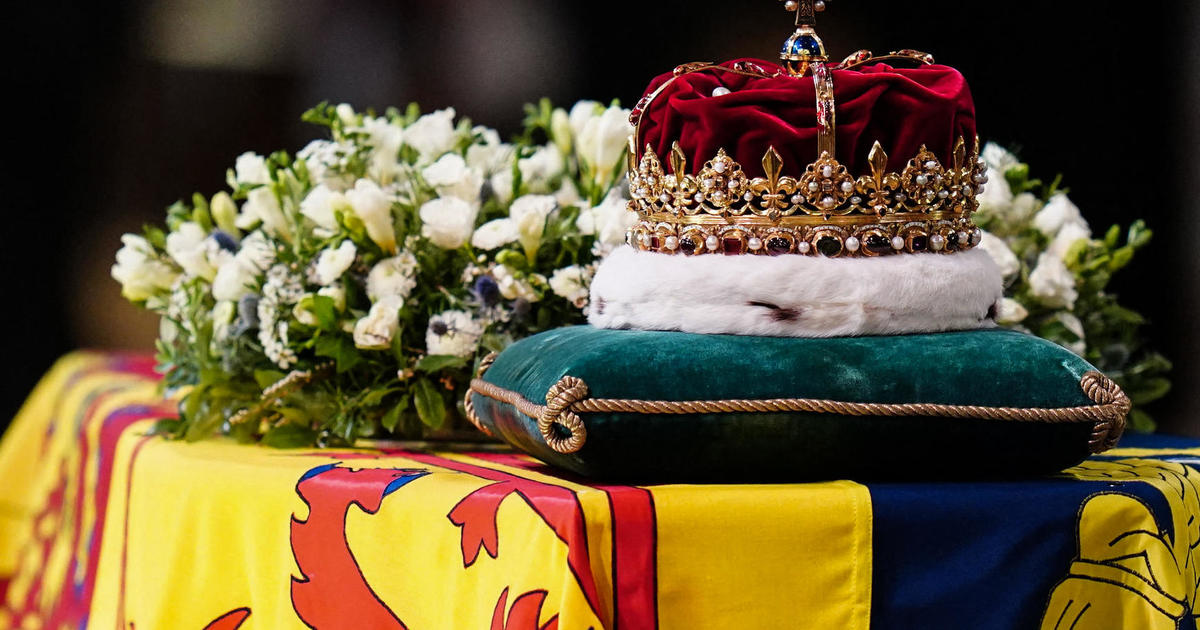 Following her death last week, Queen Elizabeth II will be honored in the U.K. and around the world with 10 days of events, including lying in state for several days. During this and other events, the queen’s coffin will be adorned with symbols of regalia. Here are the symbols you can expect to see, and what they represent.

As the queen lies in state at Westminster Hall from Wednesday to her funeral on Monday, September 19, her closed coffin will be adorned with several objects. The Royal Standard flag — the monarch’s personal flag — will be draped over the casket. The Orb and Sceptre, which are part of the royal family’s crowned jewels, will be placed on top.

The orb, also known as the Sovereign’s Orb, is presented to the monarch during their coronation. This is called the investiture. The orb, which dates back to 1661, is a golden globe with a cross. It is meant to remind the monarch that their power is derived from God.

The Sovereign’s Sceptre with Cross is also part of the coronation regalia and has been used at every coronation since Charles II’s in 1661.

Since these two artifacts are used at coronations, they are expected to be held by King Charles at his coronation.

The Historic Royal Palaces, which is a group of six palaces with exhibits that the public can visit, will be mostly closed during the 10-day operation. Some of the exhibits include the royal family’s Crown Jewels, which are on display at the Tower of London.

While most of the palaces will be closed to the public, the Crown Jewels exhibition remains open, although some elements of the collection may be in use, the Historic Royal Palaces says.

Four crowns will appear throughout the events to honor the queen. The first is the Crown of Scotland, which is placed atop her coffin as she lies in state in Edinburgh, Scotland on Monday.

Charles’ wife, Camilla, the Queen Consort, will wear the Crown of Queen Elizabeth, the Telegraph reports. This crown features the The Koh-i-Noor diamond and was given to Queen Elizabeth II’s mother in 1937, according to the Historic Royal Palaces.

The diamond was given to Queen Victoria as a condition of the Treaty of Lahore, which ended the first Anglo-Sikh War in 1849, according to Historic Royal Palaces.

Many Indians believe the diamond still belongs to India and that the British stole it, BBC News reports.

The diamond was once larger, but was recut to weigh 105.6 carats. Two legends surround this diamond – that it is both lucky and unlucky.

Staff members at the Historic Royal Palaces will be able to pay respects by wearing black armbands, ribbons and ties. Tower Officers, the Officer of the Guard and the Yeoman Body, which stand outside the palaces, will wear mourning bands with their uniforms for one month following the queen’s death.

In addition to the tight tradition that will be upheld during the 10-day operation to remember the queen, the public has also come up with more laid back, creative ways honor her. At several monuments around the U.K., mourners have left stuffed Paddington Bears and marmalade sandwiches.

Paddington Bear, a fictional character from a children’s book that has been adapted to movies, is a national treasure. During the Queen’s Jubilee – a celebration to mark her 70 years on the throne – Queen Elizabeth II appeared in a video with Paddington Bear, during which the character thanks her for everything she’s done.

During the skit, the pair talks about their love for marmalade sandwiches. So, in addition to flowers and notes, many mourners are now leaving Paddington and his favorite sandwich at landmarks – although park officials have asked them not to do so, as too many have accumulated.

Corgis are another symbol people are using to honor the queen. Mourners are not only leaving stuffed toy corgis at landmarks, but many are bringing their real-life corgis to the queen’s various memorials. Queen Elizabeth II has owned 30 corgis over her lifetime. She had two at the time of her death, named Muick (pronounced Mick) and Sandy. She also had two other dogs, but she was known as an avid corgi lover. Her dogs will now get a new home with her son, Prince Andrew.

Aside from emblematic items, there are less tangible, but still meaningful, symbols used to honor the queen. On the day of her funeral, September 19, the U.K. will have a bank holiday, the government announced last week. This is meant to be a day off for the public, so they can pay their respects to the queen. It will also mark the final day of the period of national mourning.

The government also announced all flags should be flown at half-staff, to honor the queen after her death.

People in other countries are also honoring the queen. In Beirut, Milan and Rome, the British embassies will have condolences books available for the public to sign, offering messages to remember the queen.

They Royal Family also has a virtual book of condolences for the public to write messages for the queen.