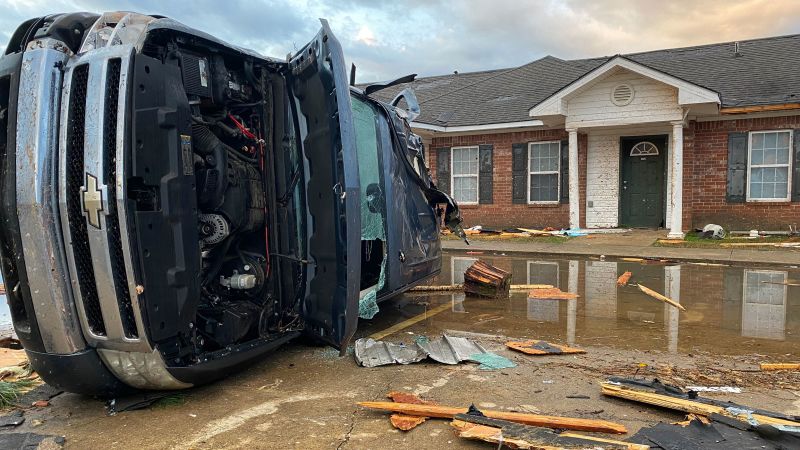 At least three people have died and more than a dozen were left injured across Louisiana over the last 24 hours as severe weather moves across the South carving a path of destruction.

Storms passed through the New Orleans area Wednesday evening, with the National Weather Service issuing a tornado warning and officials expecting a twister to have made landfall. One fatality was reported in St. Charles Parish – about 20 miles upriver from New Orleans – and seven other people were also injured in the storm Wednesday, according to parish spokesperson Samantha de Castro.

More than 300 miles north, a boy and his mother were found dead after a tornado destroyed their home Tuesday in the northwestern Louisiana community of Keithville, the Caddo Parish Sheriff’s Office said. The boy’s body was located Tuesday about a half-mile from the home, Sheriff Steve Prator told CNN affiliate KSLA.

The mother was found dead early Wednesday about a street over from where the house had been, and two other people in the community were injured, the sheriff’s office said.

And 20 people were injured in the small Union Parish town of Farmerville in northern Louisiana, near the Arkansas border, Farmerville Police Detective Cade Nolan said.

Across the rest of the state, debris where homes once stood and cars flipped upside down were seen in devastated communities where numerous residents told CNN they hid in their bathtubs in fear as they rode out the storm. The storm system knocked out power to more than 30,000 customers, according to PowerOutage.us.

The severe weather wreaking havoc all over Louisiana and moving across the Southeast is part of a massive system that also has been delivering heavy snow – and in some places blizzard conditions – in northern parts of the central US.

Wednesday’s threats come after storms Tuesday spawned tornadoes and splintered homes and businesses from Oklahoma and the Dallas-Fort Worth area to Mississippi and parts of Louisiana.

Along with severe weather, a moderate risk of excessive rainfall that could lead to flash flooding exists Wednesday for parts of Louisiana, Mississippi and west-central Alabama, the Storm Prediction Center says.

That level means widespread severe storms are likely. A risk that high is rare for December – only five at that level have been assessed in December over the past decade, a CNN Weather analysis shows.

Louisiana Gov. John Bel Edwards said Wednesday 12 parish state offices are closed due to severe weather in the state. The storms have also led to closures at Louisiana State University and Southern University in Baton Rouge on Wednesday.

Tornadoes already have been reported in the region Wednesday, including in the New Orleans area.

More than 100 miles to the west, a twister Wednesday morning damaged several homes in the city of New Iberia, and rescue efforts were underway to free an unspecified number of people trapped, city police said.

The New Iberia Police Department has confirmed in a video posted on Facebook that two tornadoes have touched down in the city. The department also said several homes have been damaged with people trapped in the Southport Subdivision after a tornado has touched down.

Also, the Iberia Medical Center “sustained a significant amount of damage,” police Capt. Leland Laseter said on Facebook. CNN has sought comment from the medical center. A shelter has been set up at New Iberia Senior High School inside the gym for anyone who has been displaced.

The St. Charles Parish Sheriff’s Office said Wednesday they received reports about a tornado that hit Killona, with heavy damage to homes and a state of emergency being declared in the parish. St. Charles Parish is located about 20 miles upriver from New Orleans.

“The Emergency Operations Center is receiving reports of damage in the Killona area including downed power lines and blocked roads,” a Facebook post from the St. Charles Parish read. “Residents should avoid the area and do not touch down power lines as they may still be electrified.”

Parts of an apartment complex and a mobile home park in the Farmerville area were demolished, with downed trees and other debris littering a road and fields, a CNN crew saw Wednesday. In speaking with residents, CNN correspondents were told by many that the storm sounded like a train rolling through their home.

“It sounds just like they say, it’s a freight train,” Tabor told CNN’s Derek Van Dam. “Once everything stopped, all the noise, that’s how I knew it was safe to come out.”

While the whole ordeal of waiting in her bathroom with her roommates and a baby lasted about 20-25 seconds, Tabor said it felt “a lot longer than that.”

“Every little creak and noise, I mean, it seemed like it was right on top of us,” Tabor said. “It was pretty bad, just hearing … everything flying around and you can’t do anything about it.”

Tabor said her home was “absolutely” damaged in the storm.

“In my hallway you can see the sky, the bedrooms – everything is ripped apart, everything’s torn. The windows in the front and back blew out,” she said. “We made it out alive last night, everybody’s accounted for so – it is an act of God.”

Patsy Andrews was home with her children when a tornado pummeled through Farmerville Tuesday night. She told CNN affiliate KNOE-TV she was in prayer on a faith line when heavy rain started, and it sounded like “rushing wind like a train” outside.

She headed to her back door to look outside to investigate because the wind was so heavy. Her son told her not to open the door, but it was too late.

“Then all of a sudden that wind was so heavy, it broke my back door,” Andrews said. “The lights went off and all we could hear was glass popping everywhere.”

She said she and her daughter hit the floor, not knowing which way to crawl.

“Everywhere we went, stuff was coming through our windows. Glass was popping,” Andrews said.

They got to a safe place in the hall way, she said, but it didn’t seems safe enough because glass was shattering and popping everywhere and water was leaking from the roof. Her daughter ended up pushing the bathroom door open and the family got into the bathtub.

“We just got in the tub and we hugged each other. We just kept praying and I just kept calling on Jesus,” Andrews said.

Her family withstood the storm, but the aftermath left her in awe. Each room in her house is leaking water, she said, but those are material items so she isn’t too worried.

“My neighbors car was turned and flipped up. So cars that were in the front were thrown in the woods across the street, the septic tanks were pulled out of the ground, all of our DirecTVs were pulled up out the ground. So this storm really came and it hit us,” she said.

Tiyia Stringfellow, her boyfriend and two young children were in her Farmerville apartment when Tuesday’s tornado damaged it, she told CNN.

“We were in the kitchen closet. All we heard was whistling, and my boyfriend got up to look outside of the window and he (saw) the tornado. The whole house was shaking and I (saw) my roof cave in, and the house went dark,” Stringfellow said, adding none of them was injured.

Storms devastated the region between Oklahoma and the Dallas-Fort Worth area to Mississippi and Louisiana Tuesday.

In Wayne, Oklahoma, an EF2 tornado damaged homes, outbuildings and barns early Tuesday, injuring no one, officials said. Homes were flattened or had roofs torn off, and trees were snapped like twigs, video from CNN affiliate KOCO shows.

In Texas, at least seven people were injured Tuesday morning as severe storms pummeled the Dallas-Fort Worth area – including at least five hurt around the city of Grapevine. Two tornado reports were made in Grapevine, where police said a mall and other businesses were damaged.

The other two people were injured Tuesday in Texas’ Wise County, northwest of Fort Worth, county officials said. One was injured when wind overturned their vehicle, and the other – also in a vehicle – was hurt by flying debris, officials said.

An EF2 tornado struck that county near the communities of Paradise and Decatur, damaging homes and businesses, officials said.