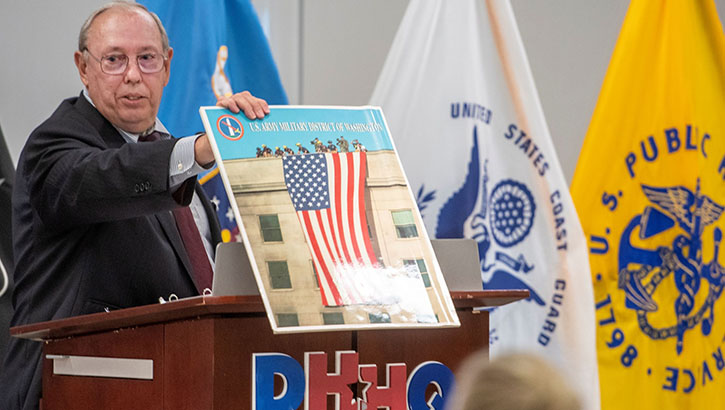 The Defense Health Agency marked the 21st anniversary of 9/11 in a ceremony on Sept. 9 at Defense Health Headquarters, honoring the victims and the stories of those who responded.

[Watch the complete ceremony on the DHA Facebook page.]

“It’s another example, among many, of what it means to be an American and how America responds in time of crisis,” said Dr. Michael Malanoksi, DHA deputy director. “It was a time when the entire country pulled itself together and moved as one to respond to a threat.”

The attacks killed 2,977 people, the single largest loss of life resulting from a foreign attack on American soil.

The day brings remembrance of the sacrifices of the many who perished and the stories of those who responded, according to Army Sgt. Major Isaac Bray, senior enlisted leader for DHA Administration and Management, in his remarks at the ceremony.

“While this day is a chance for us as a nation to pause and pay our respects to those that we’ve lost, it’s also a chance for us to honor and remember the stories of those who sacrificed so much. We use this opportunity to tell the stories of the brave men and women who answered the call when our nation was in need. Telling our stories is an important way to remember and honor the fallen on that day.”

Richard Breen, director of strategic communications for the Assistant Secretary of Defense for Health Affairs and the office of the director of DHA, said this day reinforces why, “we as a nation, and we as a Military Health System and as a Defense Health Agency take the time to never forget what that day meant for so many families, for so many Americans, and for so many people in our community because of that attack on our nation.”

Breen, the featured speaker at the ceremony, shared his memories and experiences of 9/11. At the time, he was an active-duty Army colonel serving as the director of public affairs for the U.S. Army Military District of Washington (MDW) headquartered at Fort Leslie J. McNair in Washington, D.C.

“Probably one of the most iconic photos of that day is the shot of the Pentagon when the flag was unfurled on Wednesday the twelfth of September,” he recalled. “A bunch of us were siting with the commanding general, (Army) Major General Jim Jackson, in the MDW operations truck when we started talking about getting flags around the building and someone said, ‘Let’s hang the American Flag from the top of the building. Where would we get a large flag?’ Well, just so happens, the Fort Myer Garrison and the Army band have garrison flags, so soldiers went to Fort Myer, grabbed the flag, and just as President Bush arrived on site, the flag was posted and flew, and that sent a message that we would not be conquered. It flew each night for a month with lights illuminating it until October eleventh, one month later.”

For weeks after the attack, he said, “you could not go anywhere without cars hanging flags outside their windows, overpasses had flags and positive banners about the nation. Everyone wore a flag pin, a hat or shirt or something that showcased the United States of America and freedom. You just could not imagine the patriotism at that time the likes I had never seen… the passion and the intensity of the American people who bonded.”

Religion an antidote for nasty politics