Backfirewall_ Preview – Inside Out Meets Technology 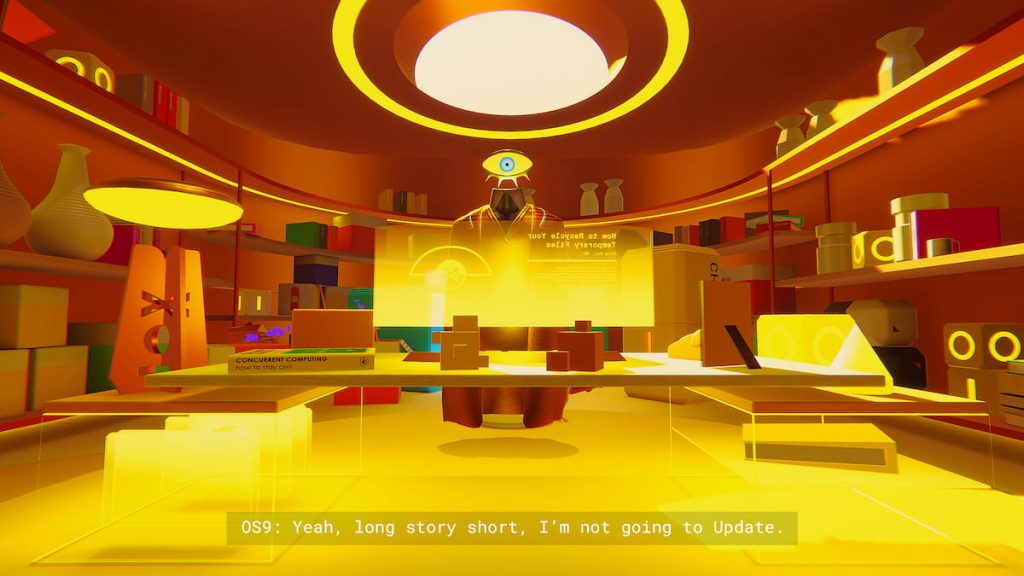 Read our Preview on Backfirewall_, the Latest Game from Publisher All in! Games

Have you ever stopped to wonder what happens when your phone updates? Probably not. But imagine if it had sentient beings that existed to help your phone run, keeping it maintained and up to scratch. And ultimately, over time, their home would decay as your device ages, causing bugs to manifest and the aging hardware to become more and more obsolete.

Well, Backfirewall_ takes that premise and runs with it. Developed by Naraven Games, Backfirewall_ sees you play as an Update Assistant inside a smartphone, who is tasked with helping the system be updated. However, things aren’t as simple as that. You, along with a rather comedic sentient Operating System called OS9, will be deleted upon the update of the system, which means you and OS9 will need to halt the update from happening.

While the preview was only the first level, with the game ending once the title card popped up, I had a good sense of where Backfirewall_ was heading. From the get-go, OS9’s character was hilarious and sarcastic, even with the sound settings at the start. Even as the update is first starting, and with OS9 in a backup format, he would sprinkle writing on the walls of the world within the smartphone. While it seems early on that OS9 has a hidden agenda, I thoroughly enjoyed the performance so far.

The world of Backfirewall_ already feels lived in, and that’s a good sign for what is to come.

Even the small time with the Update program was funny, as a trailer-like cinematic explained what changes with the update. One of the features was a new loading bar, which was apparently 8.55% better to look at. It was obvious that the cinematic narration was a jab at advertisements and announcements of new updates, offering no substantial changes despite filling the time with endless small changes.

It’s clear that Backfirewall_s narrative aims to be comedic, and I’m hoping there’s a sense of mystery during the full game. There are elements of worldbuilding with collectibles that offer to decrypt text messages between the user of the smartphone and some other people. And you also have error logs that give you some insight into existing characters.

The world inside the smartphone seems interesting. It’s filled with bright whites during the update process, looking like how I’d imagine an Apple update would be if I existed within an iPhone. But the update is juxtaposed by OS9’s cluttered living space and the first real puzzle room you encounter, with littered coding, bytes of data filling pipes, and more trash. The world of Backfirewall_ already feels lived in, and that’s a good sign for what is to come.

If Naraven Games can provide a comedic, yet emotional story for characters that exist solely in a computer device akin to a technological Inside Out, it could be one of the best indie games of the year.

The puzzles seem shallow within the preview. There wasn’t anything too difficult within the preview, and nothing revolutionary past some solutions being related to computers and technology rather than something else. The tutorial offered some insight into what to expect, with abilities to duplicate using the Ctrl+V shortcut in-game, or change colors to affect different things. If the puzzles in the later game use these abilities well, and in tandem, it could be exciting to figure out. Fortunately, there’s a wise rubber duck that will help you if you need any assistance with puzzles.

In my short time with the preview, it seems the emphasis lies on the narrative as opposed to the gameplay, but there’s nothing wrong with that. If Naraven Games can provide a comedic, yet emotional story for characters that exist solely in a computer device akin to a technological Inside Out, it could be one of the best indie games of the year. And from what I’ve seen, it’s building up to be that way. While some jokes may not land as well as others, it’s a captivating game already. Backfirewall_ is definitely a game I’ll be keeping my eyes on in the future, and you should too.

A copy of the Preview Build for Backfirewall was provided by the publisher for the purpose of this preview. Thoughts on the full game may change when it releases.

What Are the Barriers to Better Use of Technology in Special Education?