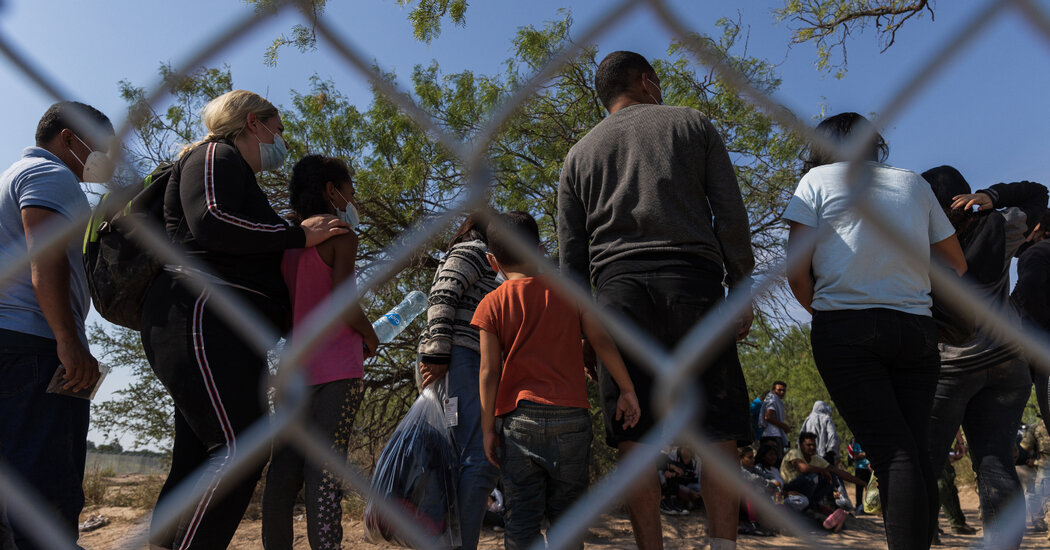 WASHINGTON — The Biden administration on Wednesday announced it would accept up to 24,000 Venezuelans via a humanitarian parole plan, although the scope of the program was far narrower than a similar one for Ukrainians.

The Department of Homeland Security also said it would expand its use of a public health rule to start expelling to Mexico Venezuelans who illegally cross the U.S. border.

The reliance on a Trump-era pandemic rule crystallized the Biden administration’s balancing act in both helping refugees and tightening border restrictions in the face of Republican attacks on President Biden’s immigration policy and record numbers of illegal border crossings. And there is no guarantee that just 27 days before the midterm elections, it will have the desired effect.

Until now, the majority of Venezuelans who crossed into the United States have not been expelled under the public health authority, known as Title 42. Instead, they were screened and released into the country temporarily to face removal proceedings in immigration court, where they have the option to apply for asylum.

Venezuelans who apply for the humanitarian parole program must have someone in the United States who can show that they are able to financially support the migrant for up to two years. During the application process, the government will assess the sponsor’s finances and vet the applicants, who will also have to have certain vaccinations and comply with other public health requirements. Venezuelans who are granted the humanitarian parole will be temporarily allowed to work legally in the United States.

In addition, any Venezuelan who enters Mexico or Panama illegally or has permanent resident status, dual nationality or refugee status with another country is ineligible for the parole program. Venezuelans who have already been released in the United States to face removal proceedings are not eligible for the program either.

The administration said its plan for Venezuelans was based on what it described as the success of the Uniting for Ukraine program, which was instituted after Ukrainians — fleeing the Russian invasion — made their way to the U.S. border from Mexico. The Biden administration has since welcomed more than 100,000 Ukrainians, through the parole program and other resettlement measures. The Department of Homeland Security says there are no limits on the number of Ukrainians who can come to the country under the program.

While the Ukrainian program received bipartisan support, Republicans have been less welcoming to the Venezuelans, more than 150,000 of whom have been apprehended at the U.S. southwestern border from October 2021 through the end of August.

“These actions make clear that there is a lawful and orderly way for Venezuelans to enter the United States, and lawful entry is the only way,” Alejandro N. Mayorkas, the Homeland Security secretary, said in a statement about the new program on Wednesday.

Announcing a new policy less than a month before the midterm elections is a calculated and political decision by the White House, John Thomas, a Republican strategist, said.

“This is more of an effort to soften people’s anger on what’s happening on the southern border,” Mr. Thomas said. “It also gives the administration a talking point that they are ‘doing something.’”

But it is not clear that the humanitarian parole and expansion of Title 42 will significantly stem the number of border crossings, as Venezuelans make up only a fraction of the migrants crossing illegally.

Advocates for immigrant rights have been urging the White House to create a humanitarian parole program for migrants from particularly unstable countries, including Venezuela.

But they are not supportive of a plan that ties humanitarian parole to expelling thousands of other Venezuelan migrants to the dangerous northern border region of Mexico.

“It’s great to be expanding access to humanitarian parole, but it can’t come at the cost of additional harm to asylum seekers,” said Raha Wala, the deputy director for legislative advocacy for the National Immigration Law Center. “Title 42 is a cruel, Trump-era, anti-immigrant policy that deserves to be relegated to the dustbin of history, not expanded.”

Escaping poverty and political instability, more than 6.8 million Venezuelans have fled their country since 2015, according to the United Nations. Most went to other South American countries.

But in the past year, more and more have been making their way to the United States. In August, Venezuelans made up about 12 percent of those who crossed the southwestern border illegally. While a majority of migrants who do so are expelled back to their country or to Mexico under the public health order, the U.S. government has not been able to repatriate Venezuelans because of minimal diplomatic relations between Washington and Caracas. And — until now — Mexico has not been willing to take in Venezuelans from the United States.

The humanitarian parole program announced on Wednesday appears to be a much more limited version of earlier proposals. One under consideration as recently as last week included Cubans, Haitians and Nicaraguans, according to officials briefed on the discussions. It was not immediately clear why these nationalities were ultimately left out.

Mr. Biden has overseen a record number of border crossings that is part of a global movement with more displaced people than ever before. Since he has been in office, the government has screened and released more than 1 million migrants who crossed the border illegally, giving them temporary permission to stay in the country until they face deportation proceedings in immigration court. The Biden administration has also expelled migrants more than 2 million times under the authority of the public health rule.

The Biden administration tried to stop using the public health authority earlier this year, but a federal court stopped it from doing so. Now the administration has expanded the authority instead.

But for vulnerable Democrats in border states, like Senator Mark Kelly of Arizona, the ability to campaign on a recent expansion to Title 42 could prove helpful in a tight race, said Carl Fogliani, a Republican political strategist.

“They would want them to be out there saying how wonderful a development this is,” Mr. Fogliani said of the White House and Democrats dealing with border issues.