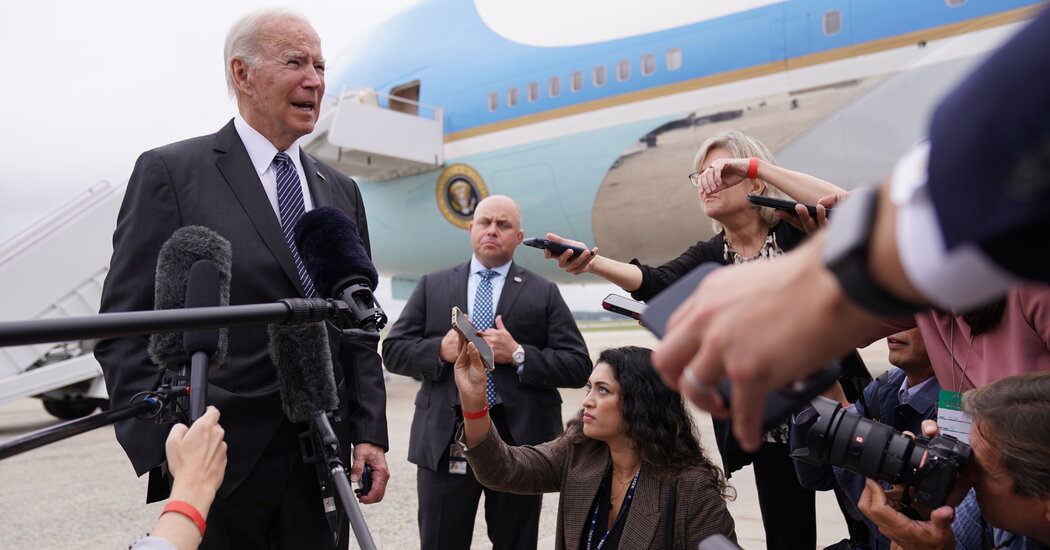 WASHINGTON — President Biden, sketching out a vision for “bold approaches” to fighting cancer and other diseases, announced on Monday that he had selected Dr. Renee Wegrzyn, a Boston biotech executive with government experience, as the director of a new federal agency aimed at pursuing risky, far-reaching ideas that will drive biomedical innovation.

Mr. Biden made the announcement at the John F. Kennedy Presidential Library and Museum in Boston, on the 60th anniversary of the former president’s “moonshot” speech that ushered in an era of space travel. He used the occasion to reiterate his call to “end cancer as we know it” — the tag line for his own “cancer moonshot” initiative.

“Imagine the possibilities — vaccines that could prevent cancer, like there is for HPV,” the president said, referring to the human papillomavirus, which can cause cervical and other cancers. “Imagine molecular ZIP codes that could deliver drugs and gene therapy precisely, to the right tissues. Imagine simple blood tests during an annual physical that could detect cancer early.”

Mr. Biden, whose son Beau died of brain cancer in 2015, has a deep personal commitment to advancing cancer research, and the Kennedy library was a reminder of that. Another Kennedy, former Senator Edward M. Kennedy, whom Mr. Biden described as “one of my dearest friends,” died in 2009 of the same kind of cancer — glioblastoma — as Beau Biden.

Mr. Biden helped create the cancer moonshot when he was vice president. Its goal, which he described as “completely doable,” is to cut cancer death rates by at least 50 percent over the next 25 years, while turning “death sentences into chronic diseases.”

He proposed the new biomedical research agency this year as part of an effort to reinvigorate the initiative.

The agency is supposed to be nimble and flexible — a kind of “Shark Tank” for biomedical research, populated by “brilliant visionary talents” who will invest in untested approaches, knowing that “probably a significant fraction of the projects are going to fail,” said Dr. Francis Collins, the former director of the National Institutes of Health, who now serves as Mr. Biden’s acting science adviser and who helped lead the search for the new director.

Dr. Wegrzyn is a vice president for business development at Ginkgo Bioworks and the head of innovation at Concentric by Ginkgo, the company’s initiative to advance coronavirus testing and track the spread of the virus. She also worked at DARPA and its sister agency, the Intelligence Advanced Research Projects Activity.

“Some of the problems we face every day — especially in health and disease — are so large they can seem insurmountable,” Dr. Wegrzyn said in a statement provided by the White House. “I have seen firsthand the tremendous expertise and energy the U.S. biomedical and biotechnological enterprise can bring to solve some of the toughest health challenges.”

Congress has appropriated $1 billion for ARPA-H, which is housed within the National Institutes of Health but reports directly to Xavier Becerra, the secretary of health and human services — an arrangement that is intended to keep the new agency from getting too caught up in the federal bureaucracy. While its director is not a Senate-confirmed position, Mr. Biden may face pushback from Republicans, some of whom have argued that the agency duplicates the N.I.H.’s efforts.

The agency already has an acting deputy director, Adam H. Russell, also a DARPA alumnus, who has been laying the technical infrastructure and other groundwork to get the new agency off the ground. Dr. Collins said Dr. Wegrzyn will begin work on Oct. 1. Her main goal will be to hire program managers who will bring bold ideas that the agency wants to pursue, and she will spend a limited time, perhaps three years, at the agency, he said.

“They will arrive, they will do a little bit of due diligence, and then they’ll have to pitch the idea to Dr. Wegrzyn,” Dr. Collins said. “If she says thumbs-up, then off they go with money to spend, to figure out how to put together the appropriate partners to get the work done.”

Coming up with successful new innovations, he said, will take time. But Steve Brozak, an investment banker whose company, WBB Securities, specializes in biotechnology, said that if the agency were going to be a success, Dr. Wegrzyn would have to move quickly to distinguish its work from the rest of the federal bureaucracy.

“What she needs to do is get a win on the board right away,” he said. “That does not mean money. That means something that can be identifiable in advancing health care for all, outside of the current paradigm.”

Mr. Biden’s selection drew praise from Ellen V. Sigal, the chairwoman of Friends of Cancer Research, a nonprofit that works with industry and government to advance new therapies. Ms. Sigal called Dr. Wegrzyn “an inspired choice,” adding that “she is a proven innovator and leader who knows science, knows how to make government work and understands the urgency for patients across the country.”

In addition to announcing his intent to appoint Dr. Wegrzyn, Mr. Biden issued an executive order on Monday establishing a biotechnology and biomanufacturing initiative intended to position the United States as a leader in the field and to center drug manufacturing in the country. The coronavirus pandemic exposed critical weaknesses in the supply chain for drugs and lifesaving therapies.

“The United States has for too long relied heavily on foreign materials for bioproduction,” the White House said in a statement, “and our past offshoring of critical industries, including biotechnology, presents a threat to our ability to access key materials like including the active pharmaceutical ingredients for lifesaving medications.”