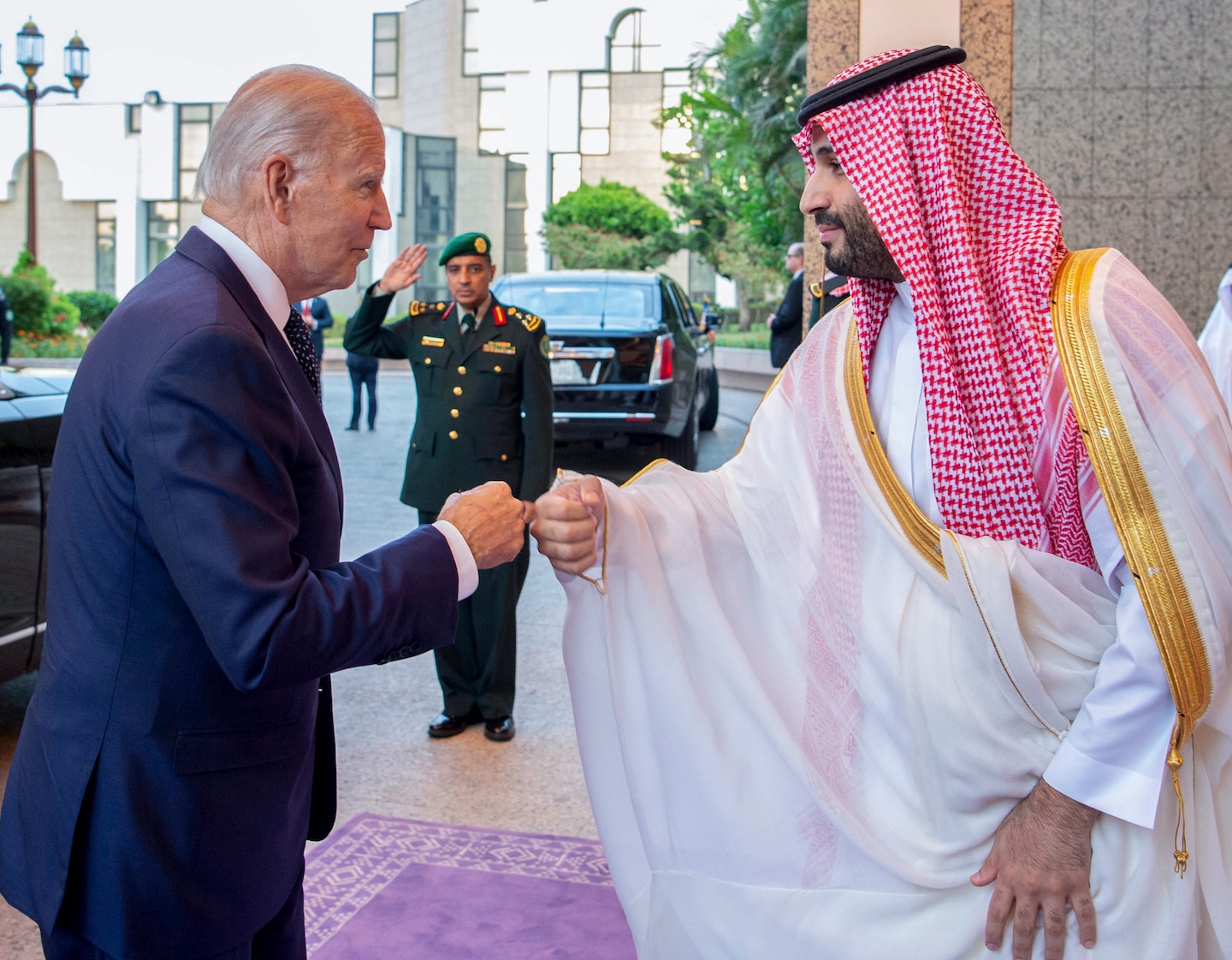 Saudi Arabia’s decision to join its partners in announcing a cut to oil production on Wednesday is setting off fresh recriminations over President Biden’s trip to the kingdom this summer, which officials hoped would improve the Saudi relationship across a range of issues, including the global supply of oil.

Some officials in the Biden administration bristled in the aftermath of the cut declared by the OPEC Plus cartel, viewing it as a direct affront to the president that threatens to hurt Democrats’ standing in the 2022 midterm elections because it will drive gas prices up.

U.S. officials now are left grappling with how to respond to a potential price spike that could help finance Russia’s war in Ukraine, compound the major challenges facing the American and European economies, and give Republicans a powerful new argument on inflation.

One White House official called the OPEC decision a “disaster.” Another said administration officials viewed the move as a deliberate provocation designed to boost Republicans’ chances so close to the elections. Other officials said they did not interpret malice in the Saudi decision, but they viewed it as a shortsighted effort to maximize oil profits despite the economic and geopolitical consequences.

Biden said Thursday that the cartel’s decision didn’t undermine the point of his visit in July, but that it was still disappointing. “The trip was not essentially for oil. The trip was about the Middle East and about Israel and rationalization of positions,” he told reporters. “But it is a disappointment.”

National Security Council spokesperson Adrienne Watson said Biden’s advisers had all agreed to the trip over the summer. “There was consensus across the President’s senior national security team on the importance of this trip to advance U.S. national security interests,” she said in a statement.

But that didn’t assuage critics of the Saudi government.

“They’re spitting in the face of Joe Biden,” said Dean Baker, a White House ally and an economist at the Center for Economic and Policy Research, a left-leaning think tank. “Whoever thought this trip was a good idea has some explaining to do.”

Even before Biden flew to the Middle East in July and fist-bumped Saudi Crown Prince Mohammed bin Salman, the country’s de facto leader, White House aides knew the trip would bring criticism. Biden had declared that human rights would be at the “center” of his foreign policy, and he said he would make the oil-rich monarchy a “pariah.” But the president also remained keenly aware of the burden soaring gas prices were having on middle-class Americans.

Biden’s top aides on Middle East and energy, Brett McGurk and Amos Hochstein, pushed for the trip as a means to strengthen the relationship and improve Washington’s ability to project influence in the Middle East at a time when oil-rich states were exploring ties with Moscow and Beijing, according to U.S. officials and congressional aides, who spoke on the condition of anonymity to discuss U.S. policy.

Administration officials had long been sharply divided on how to treat the oil-rich autocracy. Those favoring a cold-shoulder approach pointed to Saudi Arabia’s unpopular war in Yemen, Riyadh’s poor human rights record and the killing of Washington Post columnist Jamal Khashoggi as reasons to overhaul the relationship.

Biden heads to Saudi Arabia amid discomfort and criticism

Many officials in senior roles at the State Department and the U.S. Agency for International Development also said they felt they had room to maneuver, given the United States’ growth as an oil-producing energy superpower. Creating a clean break with former president Donald Trump’s remarkably close rapport with the kingdom also had broad appeal among Biden’s political appointees.

Some U.S. officials said concerns about the Saudi trip were shared by Secretary of State Antony Blinken, even though the top diplomat ultimately supported and participated in the visit.

“Secretary Blinken was fully supportive of the Administration’s engagement with our regional partners on the multiplicity of interests we have,” said State Department spokesperson Ned Price.

McGurk and Hochstein’s support for the trip began to gain favor in the White House in September 2021, as the price of oil rose and resentment in the Gulf led the United Arab Emirates and Saudi Arabia to rebuff repeated U.S. requests to increase oil output, according to senior officials and congressional aides familiar with the matter. The decisive moment for the push to draw closer to the Saudis came when Russia invaded Ukraine on Feb. 24, sending energy prices soaring and turning high gas costs, already a domestic political liability for Biden, into a geopolitical setback.

Some Democrats, already skeptical of the U.S.-Saudi relationship, seized on the OPEC Plus decision to criticize the trip.

“I think it’s time for a wholesale reevaluation of the U.S. alliance with Saudi Arabia,” Sen. Chris Murphy (D-Conn.), chairman of the Senate foreign relations subcommittee on the Middle East, told CNBC.

One Democratic congressional aide close to administration officials, who, like others, spoke on the condition of anonymity to discuss U.S. policy, said: “This trip was hotly debated inside the administration, and I don’t know how one could argue now that it wasn’t a mistake.”

White House officials have strongly denied that the goal of the trip was to spur Saudi oil production. U.S. officials who favor the U.S.-Saudi relationship said critics misunderstood the objectives of the visit and overestimated Riyadh’s ability to reduce gas prices for average Americans. They also emphasized that Saudi Arabia is pumping 11.1 million barrels per day, a rate the country hadn’t sustained in the past.

But the OPEC Plus decision means that increased production will come to an end sooner than U.S. officials hoped.

Energy analysts also say Saudi Arabia faced financial pressures to cut production, since the price of oil fell close to $80 per barrel for about two weeks last month. U.S. officials argued to Saudi counterparts that the risks of letting the price fall below that point were minimal, but the Saudis would not budge, according to people familiar with the matter who spoke on the condition of anonymity to discuss sensitive conversations. Saudi officials did not immediately respond to a request for comment.

The trip’s defenders also said it was justifiable because of the other objectives of the visit, which included bolstering a truce in the long-grinding civil war in Yemen. Aid groups say the truce, which was first agreed to in April, reduced violence as much as 60 percent. However, the warring sides recently failed to extend the six-month cease-fire, and U.S. officials now fear a “return to war,” Tim Lenderking, the U.S. special envoy for Yemen, told reporters Wednesday.

On the trip, U.S. officials also worked to open Saudi airspace to flights serving Israel, and they pressed the United Arab Emirates to stop the construction of a Chinese military base — an effort that is ongoing.

Even the staunchest defenders of Saudi Arabia concede that the timing of the production cut was a major blow to the United States, and that it came despite the strenuous objections of U.S. diplomats who pressed their counterparts through the early hours of Wednesday morning to delay the decision.

Biden officials across a wide section of the administration — including the Energy Department, State Department and the National Economic Council — raced Thursday to draw up policy responses to the announcement. No obvious solutions are apparent. Energy officials have begun looking at a potential ban on American oil exports.

White House officials have also been exploring the possibility of easing sanctions on Venezuela to supplement some of the oil lost by OPEC’s cut to production. That is a long shot, however: The United States believes Venezuelan President Nicolás Maduro needs to engage with the Venezuelan opposition before any sanctions are lifted.

Sullivan and National Economic Council Director Brian Deese said in a statement Wednesday that they will consult with Congress on additional mechanisms “to reduce OPEC’s control over energy prices” — suggesting that the U.S. policymakers could be interested in repealing a long-standing exemption to federal antitrust law that allows the consortium to effectively coordinate on prices. That measure, however, would require congressional approval and faces industry resistance, strongly reducing its likelihood of being implemented.

Yasmeen Abutaleb contributed to this report.