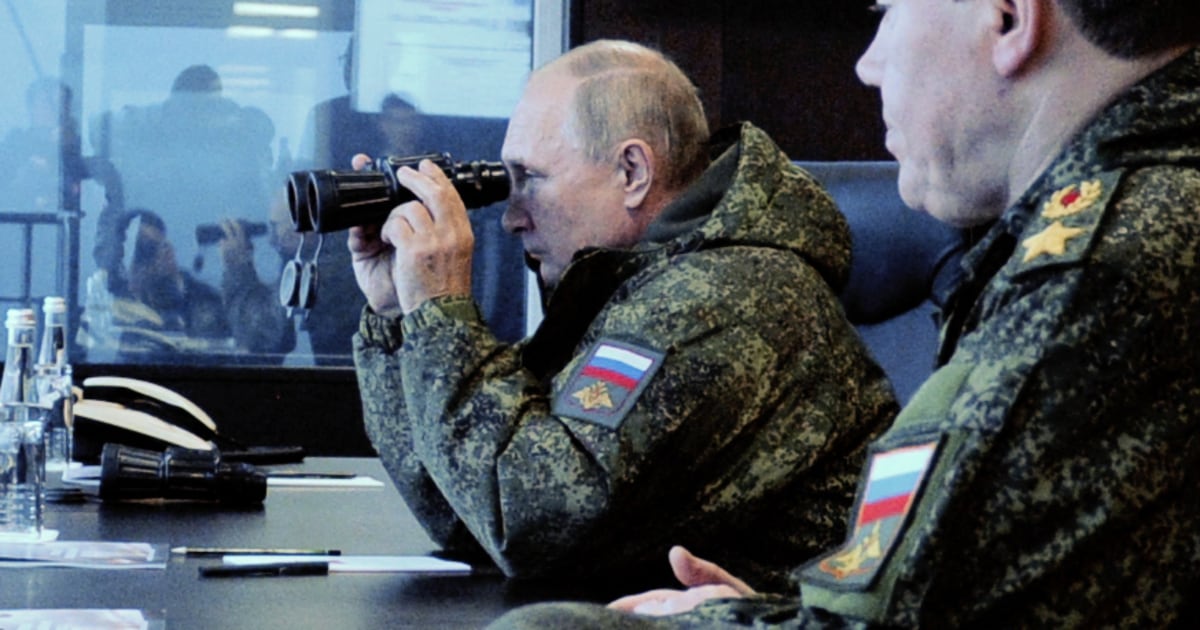 President Joe Biden said Thursday the risk of nuclear “Armageddon” is the highest it has been for 60 years after Russian President Vladimir Putin renewed his threats as his military retreats in Ukraine.

In remarks at a reception for the Democratic Senatorial Campaign Committee, Biden said it was the first time since the 1962 Cuban Missile Crisis that there has been a “direct threat” of nuclear weapons’ being used, “if, in fact, things continue down the path they are going.”

“We have not faced the prospect of Armageddon since Kennedy and the Cuban Missile Crisis,” he said, offering his bluntest comments about the use of nuclear weapons since Russia invaded Ukraine in February.

Late last month, Putin renewed nuclear threats he made at the onset of Russia’s invasion.

“If the territorial integrity of our country is threatened, we will certainly use all the means at our disposal to protect Russia and our people,” the Russian leader said in a televised national address.

Putin issued his warning as he announced the call-up of 300,000 Russian troops after his military forces suffered severe setbacks on the battlefield in Ukraine.

This week Kyiv’s troops were pushing forward in the country’s east and south, threatening a major new breakthrough and forcing Putin’s soldiers to retreat from territory he claimed to have annexed in a grand ceremony last week. With pressure growing over those defeats and the chaotic mobilization at home, fears have intensified that he may be willing to escalate further rather than accept defeat.

“We’ve got a guy I know fairly well. He’s not joking when he talks about potential use of tactical nuclear weapons or biological or chemical weapons because his military is you might say significantly underperforming.”

Biden added that he didn’t think there was a way the Kremlin might resort to a tactical nuclear strike on the battlefield — as some analysts have speculated — without inviting global catastrophe.

“I don’t think there’s any such thing as the ability to easily [use] a tactical nuclear weapon and not end up with Armageddon,” he said.

Biden was speaking at the home of James Murdoch, son of the media mogul Rupert Murdoch, who was hosting the fundraiser. His somewhat unguarded comments were not said on camera but reported by journalists as part of the pool reporting system.

The U.S. has officially been cautious in its assessment of Putin’s nuclear threats.

On Tuesday White House Press Secretary Karine Jean-Pierre said: “We have not seen any reason to adjust our own strategic nuclear posture, nor do we have indication that Russia is preparing to imminently use nuclear weapons.”

Biden’s national security adviser, Jake Sullivan, told NBC News’ “Meet the Press” last month that the consequences “would be catastrophic if Russia went down the dark road of nuclear weapons use.”

Pressed by host Chuck Todd about what those countermeasures would be, Sullivan would only say, “In private channels we have spelled out in greater detail exactly what that would mean.”

“He understands that after the use of nuclear weapons he would be unable any more to preserve, so to speak, his life, and I’m confident of that,” Zelenskyy said.

Putin has used the threat of nuclear weapons as a tactic throughout his presidency, promising to aim his warheads at European targets in 2007.

Western military analysts have expressed doubts about whether the Russian leader’s latest threats represent a real change in calculus.

“I think it signals that he wants people to think he would risk nuclear war,” Phillips O’Brien, a professor of strategic studies at the University of St. Andrews in Scotland, told NBC News on the day of Putin’s televised warning. “I don’t think it means he is any more likely to do it than he was yesterday.”

The Cuban Missile Crisis is widely viewed as the most fraught and dangerous confrontation of the Cold War.

In October 1962, President John F. Kennedy said in a TV address that there was “unmistakable evidence” that Russia had installed nuclear strike capability on Cuba.

He announced a naval “quarantine” of the island and said any attack would be considered a direct provocation by Russia, “requiring a full retaliatory response upon the Soviet Union.”

A tense public standoff followed, with the crisis averted only after some high stakes diplomacy between Kennedy and Soviet leader Nikita Khrushchev that was hampered by a misunderstanding of each others’ positions and intentions, as the State Department’s own history of the incident puts it.

The 13-day showdown resulted in a direct communication link between the White House and the Kremlin being installed in 1963. This is still known popularly as “the red telephone,” although no actual phone was involved.