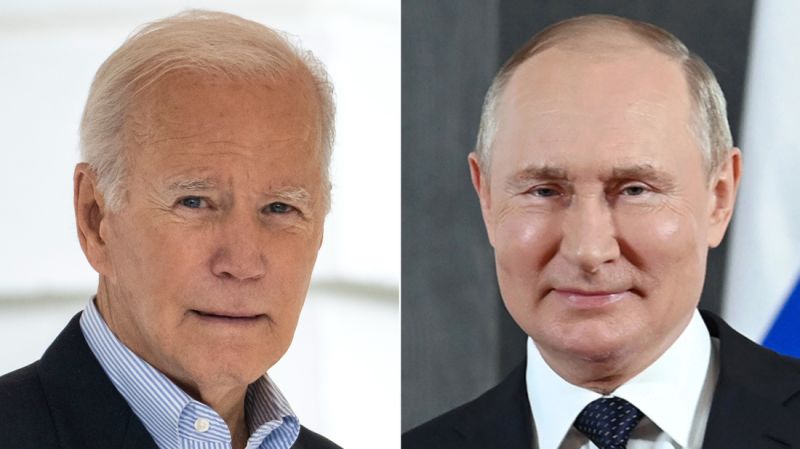 To learn that an American president is talking so frankly about the possibility of nuclear “Armageddon,” as Joe Biden did Thursday, is bone chilling.

It’s also a commentary on the grave uncertainty over how Russian President Vladimir Putin, a self-styled strongman, might react to the increasing possibility of defeat in Ukraine in a war to which he has nailed his political survival.

Biden’s remarks, at a fundraising event in New York, could open him to criticism by political opponents that he is speaking in an inartful way about nuclear war – and at a political fundraiser of all places. But they are paradoxically also a little reassuring because they reveal a president who is deeply conscious of the risks of escalation with the volatile Kremlin leader.

And whether they were meant for public consumption or not, his comments will have the effect of signaling to Putin that any use of nuclear arms – even a smaller battlefield device – could create a cascade of consequences that could lead to global disaster. In other words, Biden may be reasserting a measure of deterrence after Putin warned that he was not bluffing over his threat to possibly use a nuclear bomb.

But Biden’s comments also show that, in one way at least, Putin’s nuclear threats have worked: They have left his adversaries unsure how he might behave.

Biden told Democratic donors that the world had arrived at a dangerous moment.

“(For the) first time since the Cuban missile crisis, we have a direct threat of the use (of a) nuclear weapon if, in fact, things continue down the path they are going,” Biden said.

“We’ve got a guy I know fairly well,” Biden said of Putin.

“He’s not joking when he talks about potential use of tactical nuclear weapons or biological or chemical weapons because his military is, you might say, significantly underperforming.”

US officials are concerned that Putin might consider the use of a smaller tactical nuclear weapon in Ukraine in a desperate attempt to turn the course of the war. The White House says it has warned the Kremlin that such a decision would be “catastrophic” for Russia but has not said publicly exactly how they would respond – though there is speculation NATO might get involved and directly target Russian forces, a scenario that could lead to a dangerous escalation with Moscow.

US officials have also said, however, that they have detected no sign that Russia is moving or readying any of its tactical nuclear weapons, which can be small enough to target soldier formations or big enough to destroy a city.

Biden’s comments on Thursday underscore the burden that he now shoulders since the first president since the end of the Cold War more than 30 years ago who faces the frightening reality that nuclear war with Moscow is possible. At least once, during the decades-long standoff between the US and the Soviet Union, Armageddon could have been triggered accidentally, historical accounts show. But the only time that Washington and Moscow stood on the brink of a deliberate nuclear exchange was in the tense 13-day standoff almost exactly 60 years ago in October 1962 over Russian plans to station nuclear missiles in Cuba. Eventually, after intense messaging between Washington and Moscow, Russia leader Nikita Khrushchev backed down.

Presidents are often less guarded during political fundraising events, which are usually not on camera even though a press pool is allowed in for some remarks. So it’s possible that the President’s comments – his most stark on the nuclear question since the war in Ukraine started – might not have happened in a more conventional setting like a news conference. And the White House has frequently walked back unscripted presidential remarks on foreign policy, especially on how the US would respond if China invaded Taiwan.

But Biden’s musings do appear to offer a window into his thinking as he games out how this crisis ends. He seems to have been wrestling over the very same questions about escalation and avoiding a moment of no return that President John Kennedy faced in 1962 in his game of nuclear poker.

The President may have been thinking of Kennedy’s commencement address at American University in Washington in 1963 in which he reflected on the lessons of the Cuban missile crisis and the risks posed by weapons that could end the world.

“Above all, while defending our own vital interests, nuclear powers must avert those confrontations which bring an adversary to a choice of either a humiliating retreat or a nuclear war,” Kennedy said.

“To adopt that kind of course in the nuclear age would be evidence only of the bankruptcy of our policy – or of a collective death-wish for the world.”

Biden has been scrupulous in trying to avoid a direct confrontation with Russia over Ukraine even though Putin has styled the conflict as a showdown with the West. But the great strategic danger now is that Russian defeats are leading Putin into exactly that corner that Kennedy warned against, where the Russian President may face a choice between humiliation or the use of a nuclear weapon.

The situation is complicated by the fact that there is no prospect of a diplomatic process to end the war. Ukraine is in no mood to talk after suffering an unprovoked invasion that has caused human carnage, especially as it now appears to have Russian troops on the run. Putin cannot afford any outcome to the war that looks like anything other than total victory even though his control over the Russian media might allow him to spin a loss into a win.

Secretary of State Antony Blinken addressed the lack of diplomatic off ramps during a visit to Peru on Thursday.

“The fact is that President Putin and Russia have shown absolutely no interest in any kind of meaningful diplomacy. And unless and until they do, it’s very hard to pursue it,” Blinken said.

“We’ve said all along, President (Volodymyr) Zelensky has said all along, that this will ultimately be resolved through diplomacy. And if and when Russia shows that it has any seriousness of purpose, about engaging in such diplomacy, we’ll be ready, we’ll be there. But every sign in this moment, unfortunately, points in the opposite direction.”

The longer the war goes on, and the greater the success of Ukraine’s forces, the more concern there will be about Putin reaching for his nuclear arsenal to try to change the equation. While some strategists think that he is either bluffing or that there are no real strategic advantages to breaking the nuclear taboo – an act that would leave Russia even more ostracized in the world – there is real concern in Western governments about Putin’s state of mind. All of his previous tactical assumptions and decisions in Ukraine have backfired and don’t show the kind of strategic caution and clear thinking that is critical when the question becomes whether or not to use nuclear weapons.

With that in mind, Biden appeared to be making an argument, which Putin will now be sure to hear about, that the idea that the use of a tactical nuclear weapon in Ukraine could be contained and not lead to a wider conflagration is wrong.

The entire strategic logic between maintaining nuclear weapons for self-defense is that they are too terrible to be used, and any nation that did would be writing their own death warrant.

The President has now sent a clear signal to the Russian leader that crossing the nuclear threshold in any way could cause an escalation that would lead to a disastrous full-on nuclear war.

“I don’t think there’s any such thing as the ability to easily (use) a tactical nuclear weapon and not end up with Armageddon,” Biden said at the fundraiser.

His comments underscore the most important mission of his presidency – shepherding the world through the most dangerous nuclear brinkmanship in 60 years.