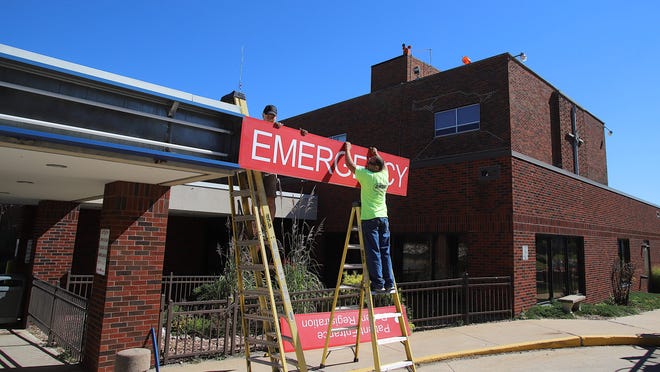 KEOKUK — It was quiet outside Blessing Health Keokuk on Friday in the hours leading up to its permanent closure at 12:01 a.m. Saturday.

The 49-bed nonprofit hospital’s 151 employees had spent the previous days clearing out personal items. Patients had stopped being seen there at 7 a.m. Traffic in and out of its doors had thinned to a slow crawl.

Stutes had been working there since 2006, she explained as she left the hospital for the last time. But, like many Keokuk residents, her history with the building dates to much earlier.

Stutes remembers her mother telling her about a nurse, Linda Daughters, who helped her and was good to her before they had to send her to Iowa City for a month in the neonatal intensive care unit. She understands the importance of a hospital to help in those first urgent moments.

One example of what will be missing for Keokuk residents came Friday, when Missy Guymon pulled up outside the ER with her son, Dylan, 12, who was hurting from an injury on the football field.

They were turned away.

“Looks like we are going to drive to Fort Madison,” Guymon said.

“It’s the end of it,” Dylan said before perking up at the idea of getting ice cream on the way back home.

While options for urgent care and family practices remain in Keokuk, the hospital’s closure leaves the city of 9,900 without an emergency department, forcing those in need to travel either 17 miles to Memorial Hospital in Carthage, Illinois, or 18 miles to Southeast Iowa Regional Medical Center’s Fort Madison campus.

Kelsey Hardy, an emergency room register clerk, walked outside for her break to see the signs for the emergency department being removed. She described the atmosphere inside the hospital as “pretty somber.”

“It’s the last day, and we were talking about the memories,” Hardy said. “It’s a little upsetting. It’s just sad.”

Blessing Health announced Sept. 1 that it would close the hospital, which, according to Blessing CEO Maureen Kahn, had been averaging only one-and-a-half in-patients and 22-24 ER patients per day.

Kathy Hull, chief of rural hospitals for Blessing Health, noted that rural hospitals operate on a thin margin whose scales can quickly tip and are highly influenced by payer mix.

“When you get the swing of a patient or two, I know it doesn’t seem like much, but it really does matter,” Hull told The Hawk Eye during a previous interview. “It could mean the difference between a successful month and a not successful month.”

Further worsening the hospital’s financial situation, which had been in crisis for more than a decade, was the condition of the building itself. A third-party review found it was in need of up to $20 million worth of work.

The history of the hospital stretches to 1886

Blessing purchased the Keokuk hospital in 2021 from UnityPoint Health, which bought Keokuk Area Hospital in 2016.

The hospital building was constructed in 1981, but its history is rooted in two hospitals, the oldest of which dates to April 28, 1886, when St. Joseph Hospital began operation as a 15-bed facility outside the city limits at the invitation of Keokuk Medical College. The next year, it moved to 14th and Exchange streets, welcoming additions in 1865, 1904, 1918 and 1929, with the original building being replaced in 1960.

Meanwhile, Mercy Hospital began in 1892 in association with the Keokuk College of Physicians and Surgeons before becoming the W.C. Graham Protestant Hospital in 1901, when it moved to 15th and Fulton streets, about seven blocks from St. Joseph’s campus.

In 1914, the Women’s Home Missionary Society of the Methodist Episcopal Church assumed management of W.C. Graham and changed its name to Graham Protestant Hospital in 1929. In 1941, it was incorporated as Graham Hospital Association and functioned as a nonprofit until Sept. 30, 1975.