Bono on music, activism and faith 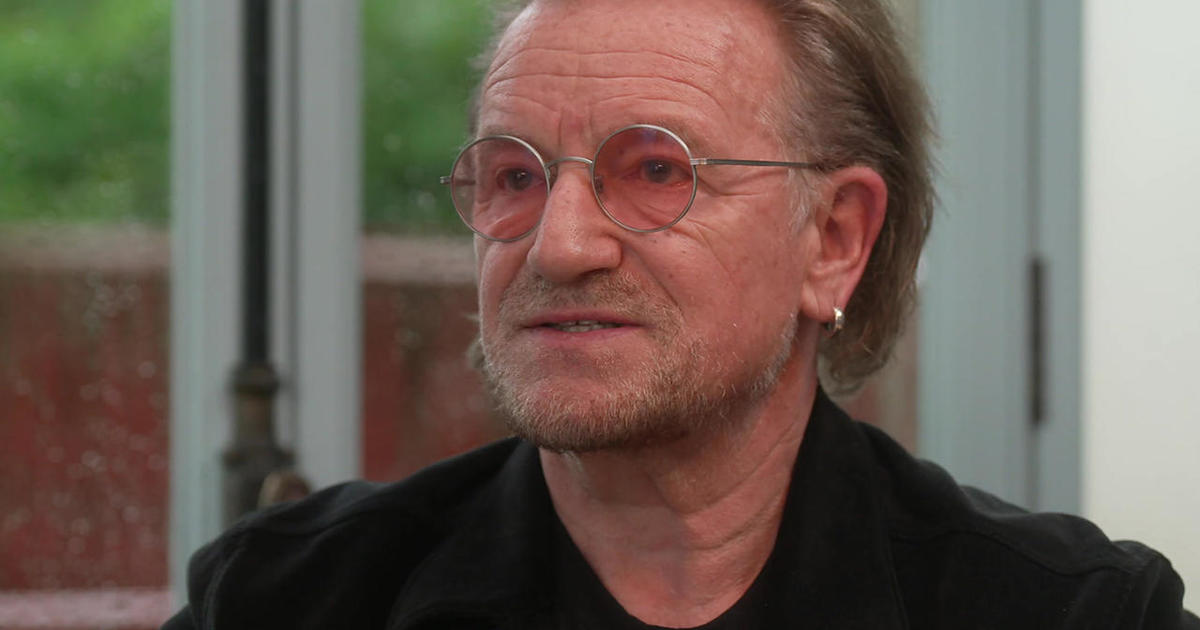 In more than four decades as U2’s frontman, Bono has been leading one of the world’s biggest rock bands across the world’s biggest stages. But this stage (if you can call it that), in the schoolyard at Mount Temple Comprehensive in North Dublin, would be their first.

Mounting the stage with “CBS Evening News” anchor Norah O’Donnell, Bono recalled, “Yeah, I mean, most people were looking the other way, if they had ears. But wow, did it feel good to be here!”

It was 1978. The boys who weren’t quite yet on their way to superstardom – Bono, The Edge, Larry Mullen Jr., and Adam Clayton – were called The Hype. The name didn’t stick, but Bono already had the vague sense they might live up to it.

O’Donnell asked, “Do you remember that feeling of being on stage here?”

Born Paul David Hewson, he was dubbed Bono by his childhood best friend, and he found “the thing” early on.

It wasn’t obvious, even to his high school music teacher. “I remember one moment where he says, ‘I’m going to get you people who can play an instrument to write a piece of music,'” Bono said.

“But you didn’t know how to play an instrument?”

“No, so I was in a different part of the class. But I remember that feeling, you know, because I knew I could do this. I know I don’t know how to play an instrument, sir! But I have these melodies in my head, and I have words and I have things I want to say.”

U2 formed after 14-year-old Larry Mullen Jr. posted an ad on a school bulletin board: “Drummer seeks musicians to form band.”

“How casually our destiny arrives,” Bono writes in his new memoir, “Surrender: 40 Songs, One Story,” published this Tuesday by Knopf.

The idea of how the band started was “preposterous,” he said, “but there was magic, you know, that’s all we had. And of course, there was a desperation to make something of our lives.”

“In those early days of the band, did any of you have an idea of superstardom?”

“That would be me!” he laughed. “It’s so embarrassing! Trying to break it down sometimes when I look at the absurdity of my life …. We own some kind of feeling. We own our own tone. So, there’s something there.”

With that tone – that singular sound – U2 rose to the height of success – the only band in history with #1 albums on the Billboard 200 in four consecutive decades, starting in the 1980s with “The Joshua Tree.”

U2 performs “I Still Haven’t Found What I’m Looking For” from “The Joshua Tree”:

They’ve sold an estimated 170 million albums and won 22 Grammys – more than any other band.

It was a long way from Cedarwood Road, where Bono grew up. While we visited with the family that lives in his childhood home (“It’s never our place, it’s always, ‘Was that Bono’s house?'” laughed Mrs. Ryan), a crowd gathered outside to see the local boy who made good.

As part of our tour of Bono’s Dublin, we stopped for a pint at Finnegan’s of Dalkey for a rare interview with Bono’s wife of 40 years, Ali Hewson.

O’Donnell asked, “So, you call him Bono? Not Paul?”

“Pretty much – I call him a lot things!” Ali laughed.

“And Paul is not one of them!” Bono added.

They started dating the same week U2 became a band, and she’s inspired some of their biggest hits.

When asked what she thought reading “Surrender,” Ali replied, “I was very nervous about what was going to go in that book. But I think he’s an incredible writer. It just seems to be anything he turns his hand to, he can do, which is very annoying most of the time!”

O’Donnell asked, “Which one of you first saw what U2 might become?”

“I don’t think either of us really saw it,” Ali said. “I mean, there was a huge amount of confidence when you’re a teenager, I suppose.”

“Front is another word for that,” Bono said. “Frontman. Yeah. Probably more front than substance … and faith.”

Faith not only in himself, and not only his band.

“You talk about faith a lot; are you religious?” O’Donnell asked.

“I don’t know. I’m like a stray dog. I go to a Catholic church. I’d be in a synagogue. If somebody said right now here, ‘Would you give your life to Jesus?’ I’d be, ‘Me!’ And I’m not one of those that turns over the picture of the pope before they do anything funky. I take God with me wherever I’m going. And so, God has seen me in a bit of a state, I’m sure.”

Early on, U2’s involvement in a Christian group led to questioning whether they could be a band and be believers. Bono said, “What purpose can music – what’s the purpose? The world is, you know, in flames. What are we doing here? At that moment Edge started work on a song called ‘Sunday Bloody Sunday.’ And that’s what unlocked it for him. And that kind of unlocked it for us, because we realized that our songs can speak into a situation and perhaps be useful.”

“Sunday Bloody Sunday” was a condemnation of the bloodshed in Ireland at the time. And, Bono said, although it was tested, they didn’t lose their faith. “It’s not like, ‘Oh, we’ve grown up out of that, that was a bit mad.’ It was a bit mad. But actually, the scriptures, the sacred texts are still very important to me and very important to the band.”

Which might explain his decades’ long fight against poverty, his meetings with popes and presidents, lobbying heads of state around the world, much of it through the work of his organization, One. “Our motivation is very much justice,” he said. “We cancelled $130 billion worth of debt. An extra 54 million children went to school. That’s a big thing in my life. Particularly with fighting AIDS, that, for me, outside of my family, our music, is the thing that I’m most proud of in my life, even as a tiny part, a catalyst.”

Whether it’s music, or politics or activism, for Bono the frontman it comes down to the same thing: “In anything, I was always looking for the top line melody.”

“Describe what you mean when you say top line melodies?” asked O’Donnell.

“It’s the thing in the room that rises above the noise and the chatter,” he said. “That’s my job. I’m a songwriter. I’m looking for the clear thought in most things that I do. But the best stories win. The best melodies are the ones that you hear around the corner and you go, ‘What’s that?’ Top line melody.”

“Get this woman a drink!” Bono laughed.

READ AN EXCERPT: “Surrender: 40 Songs, One Story” by Bono