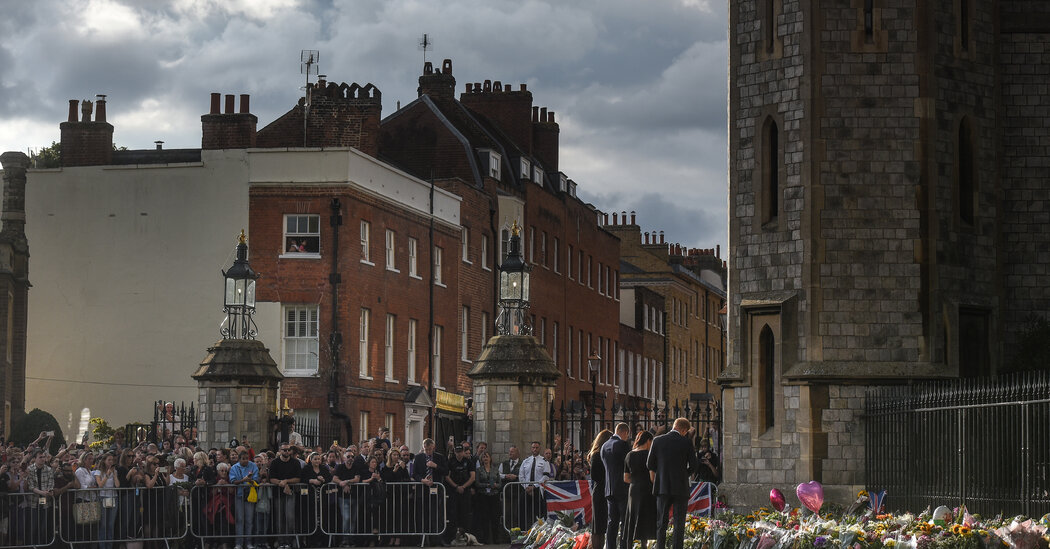 Britain has entered a mourning of Queen Elizabeth II that incorporates a pomp that few people alive have seen, given the length of her reign. Churches tolled their bells, and dozens of gun salutes were fired. The top English soccer league postponed its weekend matches, and most programming on television was about her. Her funeral, scheduled for Sept. 19, will be a national day off.

To get a feel for what is unfolding in Britain, I spoke to Mark Landler, The Times’s London bureau chief.

Claire: Mark, you and I both live in London. When I came out of the Underground on Friday, the first thing I saw was a giant billboard of the queen. I could barely get a newspaper because they were mostly sold out. How have you seen people mourn?

Mark: There are these visible examples of mourning. The queen’s face is now on every single bus shelter in London. She’s peering down from Piccadilly Circus and countless other places. But Britons tend to be kind of stoic. You feel it more as this sorrowful undercurrent than as this visible, dramatic display of grief. And there’s not the demonstrative display of grief that you saw after the death of Diana in 1997.

This figure of familiarity for virtually everyone in this country is gone. You hear it in shops and in post offices and on the tube: Something the Brits took for granted is no longer there.

We’ve seen a divide in reactions from people of different ages. The Times reported that many young Britons were more muted in their reaction and that some called the monarchy irrelevant.

Part of that divide is a function of time. If you’re an older Brit, you remember the queen from when she was much more present in public life. Over the years, the monarchy has gained more notoriety for scandals than for the institution itself. If you’re a young person, you may be more inclined to think about Harry and Meghan than about the queen when you think of the royal family.

On the night the queen died, I was in a taxi in the Camden neighborhood here in London. The streets were packed with kids going in and out of pubs and clubs. They were laughing and joking and vaping and doing everything kids do. It crossed my mind: The fact that the queen had died hours earlier didn’t seem to register that much. And why would you expect it to?

This kind of mourning process is unlike anything most of us have seen, even if it is fit for Britain’s longest-ruling monarch. What should we look for over the coming days?

Operation London Bridge, the name for the funeral plan, has been in the works for decades. It draws on ancient traditions for how you mark the death of a monarch, some of which are hopelessly out of date.

One highlight will be when the queen’s casket returns to London. She will lie in state in Westminster Hall, where she’ll be viewed by probably hundreds of thousands of people. Then, a few days later, she’ll have a state funeral. It’ll be the first since Winston Churchill’s in 1965. So this is an almost once-in-a-century event.

You’ve been a correspondent in Washington, Germany, Hong Kong and now Britain. I’m curious what you think of the argument that constitutional monarchies are a surprisingly effective form of government. As the American writer Matthew Yglesias put it this past week, “It’s hard to defend constitutional monarchy in terms of first principles, but the empirical track record seems good.”

Britain has been through a fairly turbulent period. There have been four prime ministers in six years and the storms of Brexit haven’t yet ebbed. The role of the monarch during this period has been important. As Britain cast itself off from Europe, it really needed to reclaim a sense of national identity. The queen supplied that. The monarch is the stabilizing anchor underneath a rotating cast of prime ministers and the inevitable turmoil of a democratic system.

The queen wasn’t just Britain’s monarch, she was also the head of state of more than a dozen of the countries in the Commonwealth, including Canada, Australia and several Caribbean islands. How has the reaction been different in other parts of the world?

The queen’s death raises questions of whether some countries will seize the moment to throw off the monarchy. Barbados replaced the queen as head of state last year, and Jamaica is thinking of doing it. That doesn’t happen overnight, but the overall direction is pretty clear: It’s a direction away from recognizing monarchy.

What was your reaction when you first heard the news?

I never believed that the queen would die on my watch. I just assumed, like many people, that she was kind of eternal. When it happened, I had a moment of disbelief. And it happened on the heels of a new prime minister. The combination of news was kind of overwhelming. But that’s also what you live for as a journalist.

I’d love to be a fly on the wall at the first private meetings between King Charles III and Liz Truss, the new prime minister.

By tradition, neither side talks about those meetings. But it was probably very different from when Elizabeth and Churchill had their first official meeting. He tutored and mentored her. Now you’ve got a 73-year-old king and a 47-year-old rookie prime minister. He’s new as king but he has been in public life for decades. It’s almost like a role reversal from what we saw when Elizabeth became queen.

Mark Landler has covered the Obama and Trump White Houses and served as Hong Kong bureau chief. He only saw the queen in person once, at a NATO ceremony in Portsmouth, England, when he was reporting on Donald Trump. He’s originally from Vermont.

The Sunday question: What should happen to the British monarchy now?

It’s an outdated and corrupt feudal relic, and abolishing it would make Britain a more democratic society, The Guardian’s Polly Toynbee has argued. The Washington Post’s George Will thinks the monarchy remains a useful source of national unity and purpose.

The Ethicist: Is it OK to take a law-firm job defending climate villains?

What to Watch For

What to Cook This Week