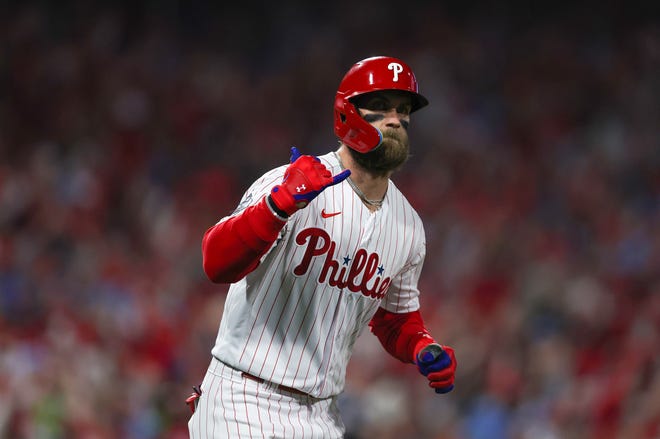 PHILADELPHIA –The Phillies keep seeing it, over and over, but somehow, it’s more mind-boggling by the game.

They have no more words, no more ways to describe Bryce Harper any longer.

“But it’s cool to see him be The Guy on baseball’s biggest stage.’’

Never before in World Series history had a team hit three home runs in the first two innings of a game.

Never before in World Series history had a team hit five home runs in the first five innings of a game.

But never before has the World Series ever had Bryce Harper, and he’s putting on a show for the ages this postseason, hitting .382 with six home runs, 13 RBI with an insane 1.232 OPS.

Harper may have hit just one of the five home runs, but none were bigger, as the Phillies kept telling everyone late into the night in their clubhouse.

Harper hit one of the most famous home runs in Philadelphia history to send the Phillies to the World Series last week, and with his first swing of the bat this night, hit a first-inning, two-run homer that had 45,712 fans screaming into the night.

“It was Bryce that set the tone with that first punch,’’ said Hoskins, who also has six home runs for the Phillies this postseason with his fifth-inning blast. “It was insane. I think it took [the fans] until the eighth inning before they sat down.’’

“He’s showing everybody what he is this postseason. He’s a multi-generational talent. He’s doing everything he can to help us get that World Series trophy.

“And I want that [expletive] trophy back.’’

It has been 14 years since the Phillies have been World Series champions, with only two titles in the last 42 years, but here they are, just two victories away from the championship with a surprising 2 games to 1 lead over the heavily-favored Astros.

Maybe there really is something magical going on with this team. How else can you explain that a team that started off 22-29, finished third in the NL East, was the last team to reach the postseason only because of the expanded playoffs, is now shocking the world?

“I think all year we’ve kind of known what we have and felt good about our team,’’ said Bohm, who homered after getting a tip from Harper, “knowing that everywhere you look on our roster we got really good players, some experience. So we should be confident.

“I think the more you show yourself you belong in these situations, I think that confidence just naturally grows.’’

And no one has been more confident these days than Harper.

“Bryce probably sets one of the best examples out of anybody in the league,’’ Bohm said, “of just how to show up and play the game. So just to be in the dugout with him, watch him, be on the field with him, he’s always showing you how it’s done. So he doesn’t have to say much. But he’s always trying to lend that hand and make the team better.

“I think just the example he sets every day is really what makes him the leader he is.’’

It was Harper’s blow, sending McCuller’s curveball 402 feet into the night into the right-center field stands, that sent McCullers spinning into a pirouette on the mound.

“It was crazy, one pitch, boom!’’ Middleton said. “As soon as he hit it, I knew it was gone. It’s crazy. … But for Bryce to open a game like that, 2-0, three batters in, that’s pretty special. It lights the place up. Lights the bench up. Gets everybody really going. That’s really special, wow.’’

McCullers never recovered. He faced 16 more batters, giving up homers to four of them, and was out of the game after just 4 ⅓ innings.

“Bryce Harper has had a star by his name since he’s been playing baseball,’’ McCullers said. “It was a bad pitch. I told myself before the at-bat, ‘Don’t let him beat you’re here.’’’

There was plenty of conjecture and theories that McCullers was tipping his pitches. He gave up only one homer to a left-handed hitter all season. He gave up three in nine plate appearances to lefties, throwing 34 pitches, and generating just one swing-and-miss.

It was as if the Phillies knew exactly what was coming, a legal version of sign-stealing.

“I’m not going to sit here and say anything like that,’’ McCullers said. “I got whooped. End of story.’’

But, oh, how it was the latest chapter of the legend of Harper.

This is a guy who underwent surgery to repair his broken thumb after being hit by a pitch June 25 thrown by San Diego Padres starter Blake Snell. He came back two months later, just in time to help push the Phillies into the postseason for the first time since 2011, and now is carrying the franchise on his back.

While the Phillies benefited from the new collective bargaining agreement to add another wild-card team in each league, no new rule has assisted them more than the National League adopting the DH rule. If Harper couldn’t be a DH, he would be relegated to the bench, unable to play the field until next season.

Dombrowski, trying to persuade Middleton to change his mind since National League owners would need to approve the DH, told him that two of their pitchers actually hurt their backs during spring training by simply taking batting practice.

“So, I flipped in about a four-minute conversation.

“I think that DH has worked out pretty well for us.’’

Yes, as the entire city of Philadelphia and frenzied sellout crowds will tell you, this DH gig is fitting in quite nicely into their World Series title dreams.

“We’re all a family here, man,’’ Harper said. “We all try to come in here and play the best baseball we can knowing that we have a whole city behind us. This whole city is so excited to be in this moment. We’re just thrilled to play in front of them, have this opportunity, and just be there with them. …

“We know there’s going to be 46,000 people here screaming and yelling and going crazy.’’

Who knows, the way Harper and the Phillies are hitting these days, the fun may just be getting started.