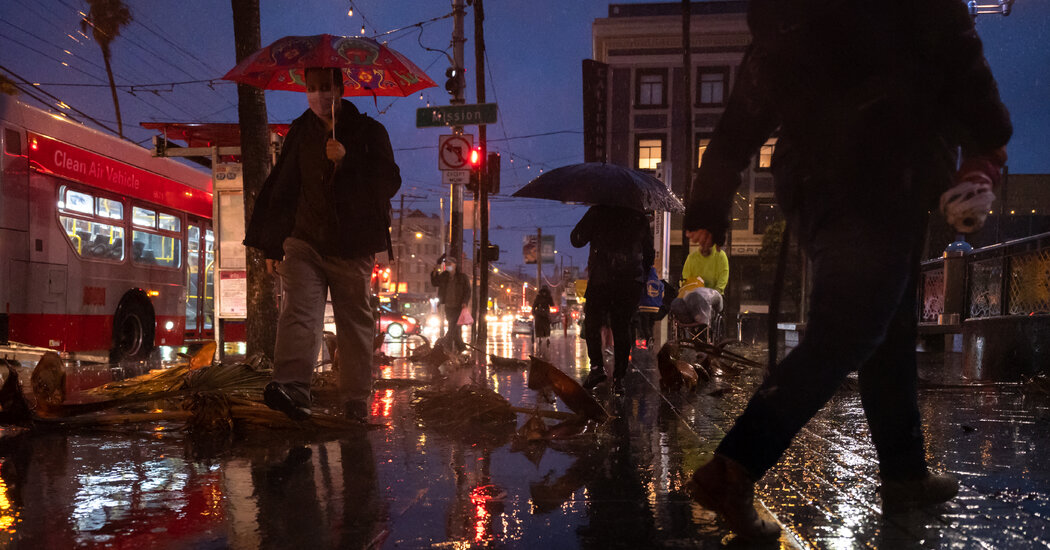 SAN FRANCISCO — A powerful winter storm system moving across California on Thursday sent trees crashing into homes, knocked out electricity for tens of thousands of people and churned up dangerous surf along the coast as it brought more rain, wind and snow to the already saturated state.

The storm, one of several that is expected to pound the West Coast this month, poured water into swollen rivers and dumped fresh snow on the Sierra Nevada. Further rounds of heavy precipitation were expected in California on Saturday, and again on Monday.

“This storm is hitting our entire state,” said Brian Ferguson, a spokesman for the California Governor’s Office of Emergency Services. “We have the risk of rising tides on our coast, we have risks of snow and avalanche in the mountains, we have flood and debris flow risk in our rural areas, and also flood and power outage risk — and falling trees and lines — in our urban areas.”

In many places, the intense wind and rain seemed to abate by Thursday morning. But the respite would not last long, Mr. Ferguson said. “We are not out of the woods by any stretch of the imagination,” he said. “We are basically in the eye of the storm right now.”

The storm has been particularly disruptive in the Bay Area, where a combination of high winds and saturated land has downed trees, which have smashed into buildings, cars and power lines.

Bay Area Rapid Transit, which ferries thousands of commuters to work each day, had to slow some trains and cancel others because of fallen trees, other storm debris and wet weather.

In Burlingame, near San Francisco International Airport, a tree fell onto power lines near a set of train tracks, shutting down rail service on Thursday morning. And a mudslide blocked one lane of State Route 1, according to the police in Pacifica, south of San Francisco.

When a eucalyptus tree slammed into her neighbor’s apartment in Oakland on Wednesday night, Jean Melesaine, 37, rushed to the street to see what was happening. She said that her neighbor gathered her three children and ran outside — right around the time the power went out for the whole neighborhood.

“You just feel for people who are losing their homes, and all the people who don’t have homes right now, and all the workers who’ve got to work though this,” Ms. Melesaine said.

“We’re not used to this,” she added. “I’m born and raised in the Bay, and I’ve never seen anything like this.”

Almost 600,000 customers had lost power at some point in the storm, according to the tracking site PowerOutage.us, with about 100,000 still without electricity as of Thursday afternoon. Flash flood watches and winter storm warnings covered large swaths of the state. Multiple communities across California issued evacuation orders, including an area of San Benito County, south of San Jose, where a failure at a hydropower dam was expected to produce flooding. And several school districts around the Bay Area canceled classes on Thursday.

Along the Northern California coastline, huge waves damaged infrastructure and forced people away from the coast. A tidal surge washed away chunks of piers in the towns of Seacliff and Capitola and led the city of Santa Cruz to close its wharf, said Nicole Coburn, the assistant county administrative officer. She estimated the destruction would add several million dollars to the $10 to $15 million in damages already caused by last week’s storm.

Forecasters across the state kept a wary eye on rising rivers. Brett Whitin, a hydrologist with the California Nevada River Forecast Center, said on Thursday that there were growing concerns that the Russian River might overflow near the small town of Guerneville in Sonoma County.

The authorities issued evacuation warnings on Wednesday along the river. On Thursday, the rising waters were considered likely to reach flood levels by next Tuesday, according to the forecast center’s predictions.

In San Francisco — where the downtown area saw its wettest 10-day period since 1871, according to the National Weather Service — crews were working to remove trees and clean streets littered with debris, and city officials had opened additional shelters for the city’s thousands of homeless residents.

In the Tenderloin district on Thursday afternoon, dozens of people found shelter, food and hot coffee inside of a grand church, just across the street from free showers, bathrooms and laundry machines — services that are available year-round, but have lately been in higher demand.

“Things have certainly picked up since the storms began,” said Sally Haims, a spokeswoman for St. Anthony’s, the charity that offered the services.

In Los Angeles, the Weather Service said on Thursday morning that the rain there was “definitely less than what we were expecting,” but warned that showers and thunderstorms were forecast for the evening.

In the Eastern Sierra town of Mammoth Lakes, a major road closure stranded thousands of people on Thursday morning, though limited access had been restored by the afternoon.

About 50 miles of U.S. Route 395, the main thoroughfare that connects Hesperia, in Southern California, to Reno, Nev., were shut down because of whiteout conditions in the mountains late Wednesday. So when an avalanche sent ice and snow tumbling onto the roadway overnight, no injuries were reported.

But Mammoth Lakes, where the population can swell to as high as 20,000 during winter tourist season, was snowed in for hours. “It’s a pretty manageable storm, but what’s causing it to be chaotic is the sheer amount of people,” said Krystle Stewart, a spokeswoman for the Mammoth Lakes Police Department. “The grocery store has been picked clean lately,” she added.

California authorities blamed the storm for at least two deaths on Wednesday. In Fairfield, northeast of San Francisco, a 19-year-old woman died after the car she was driving hydroplaned and crashed into a utility pole, the police said. And a 2-year-old was killed when a redwood tree fell on a mobile home in Occidental, a rural community in Sonoma County, said Josh Cerda, a firefighter engineer with the local volunteer Fire Department.

The storm is just one in a series of atmospheric rivers — channels of moisture from the tropical Pacific Ocean. California has taken a pounding in recent weeks, even as the heavy rain and snow have brought a measure of relief to the state’s giant agricultural industry. An atmospheric river that drenched the West Coast last week killed at least five people in Oregon. A related storm hit earlier this week, causing widespread flooding in the Bay Area and at least four deaths in California.

Scientists are not sure how climate change affects the likelihood that atmospheric rivers will crash into California’s coast in rapid-fire succession again. They are studying whether global warming might be shifting the way winds carry moisture around the atmosphere.

When such storms are particularly severe or sweep through in rapid succession, they can deliver too much water too quickly to a state that has lately been parched by drought and scorched by wildfires.

With more bad weather on the way, Gov. Gavin Newsom declared a state of emergency on Wednesday, saying that he expected more highway closures, infrastructure failures and mandatory evacuations in the coming days.