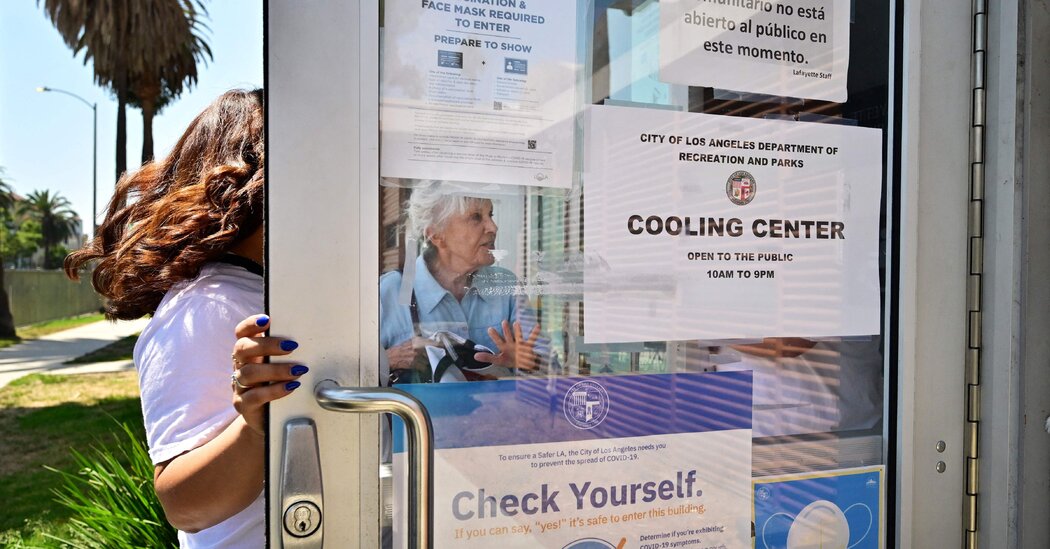 A vast dome of high pressure has edged westward and settled over California, inflicting sweltering and record-setting temperatures across much of the state and threatening to strain the state’s power grid.

In Southern California, Pasadena touched 103 degrees over the weekend, breaking a daily record set in 1938. Burbank hit 110 degrees. In the Central Valley, a federal meteorologist forecast that Fresno, a city of more than 500,000, would top out at 114 degrees on Tuesday — three degrees higher than the city’s all-time high temperature for September.

“It’s definitely record-setting,” said Bill South, lead meteorologist for the National Weather Service in Hanford, Calif., where the temperature is forecast to hit 110. “We get heat waves in September but rarely as intense as this one.”

State officials called on the public Monday to double or triple their efforts to conserve electricity, warning that record-setting demand for power could force rolling blackouts by the end of the day.

“We have now entered the most intense phase of this heat wave,” said Elliot Mainzer, chief executive of the California Independent System Operator, which oversees the grid.

Over the past week, Californians have reduced their electricity use to as much as 2 percent below forecast, giving the grid operators a significant buffer, said Mr. Mainzer. But as the heat wave, which is setting records even at night, continues through the rest of the week, “we need two to three times as much conservation as we’ve been experiencing to keep the power on,” Mr. Mainzer said.

In August 2020, several hundred thousand Californians lost power in rolling blackouts during a heat wave, but the state sidestepped that scenario last summer. Gov. Gavin Newsom said the state had added least 8,000 megawatts of clean energy to the grid since 2020, and he signed legislation last week that may allow the state’s last operating nuclear power station, at Diablo Canyon, to remain in service past its scheduled closure in 2025. But severe drought has reduced the availability of hydropower, and solar power generation wanes as night falls, leaving the state to rely heavily on aging gas-fired power plants and on imported electricity from other states.

Across California, officials have asked residents to set their air-conditioning at a sticky 78 degrees in hopes of conserving power. When extreme heat rolls in, air-conditioning acts as a lifesaver. A similar heat wave hit California in 1955 and claimed 950 lives, but nothing like that magnitude of public heath disaster has resulted from a heat wave in the state since then.

Though the current heat wave is setting records, scorching September heat is not unusual in California. High pressure builds in — in this case, moving westward from New Mexico, Arizona and Utah — and except in the coastal cities, temperatures rise well in excess of 100 degrees.

The extreme heat dries out forests and grassland, and can lead to disastrous forest fires, particularly at times like now when California is afflicted with a long-running drought. On Monday afternoon, a brush fire broke out in the hills by the city of Hemet, in Riverside County, and quickly grew to 500 acres, Cal Fire reported.

Two big wildfires are currently burning in the state — one north of Los Angeles and the other in far northern Siskiyou County — but the total acreage burned so far this year trails significantly behind those of the past two years.

Many meteorologists and scientists point to more frequent and severe heat waves around the world as clear evidence of the effects of global warming, and that is consistent with many studies. But drawing a direct link between climate change and any single weather event can prove tenuous.

“Obviously, climate change is real and very important, and we must move aggressively,” said Roger Pielke Jr., a professor of environmental science at the University of Colorado Boulder. “But it’s not like there’s a safe climate that we’ve turned into a dangerous one.”