Can a Third Party Be the Charm for Polarized Politics? 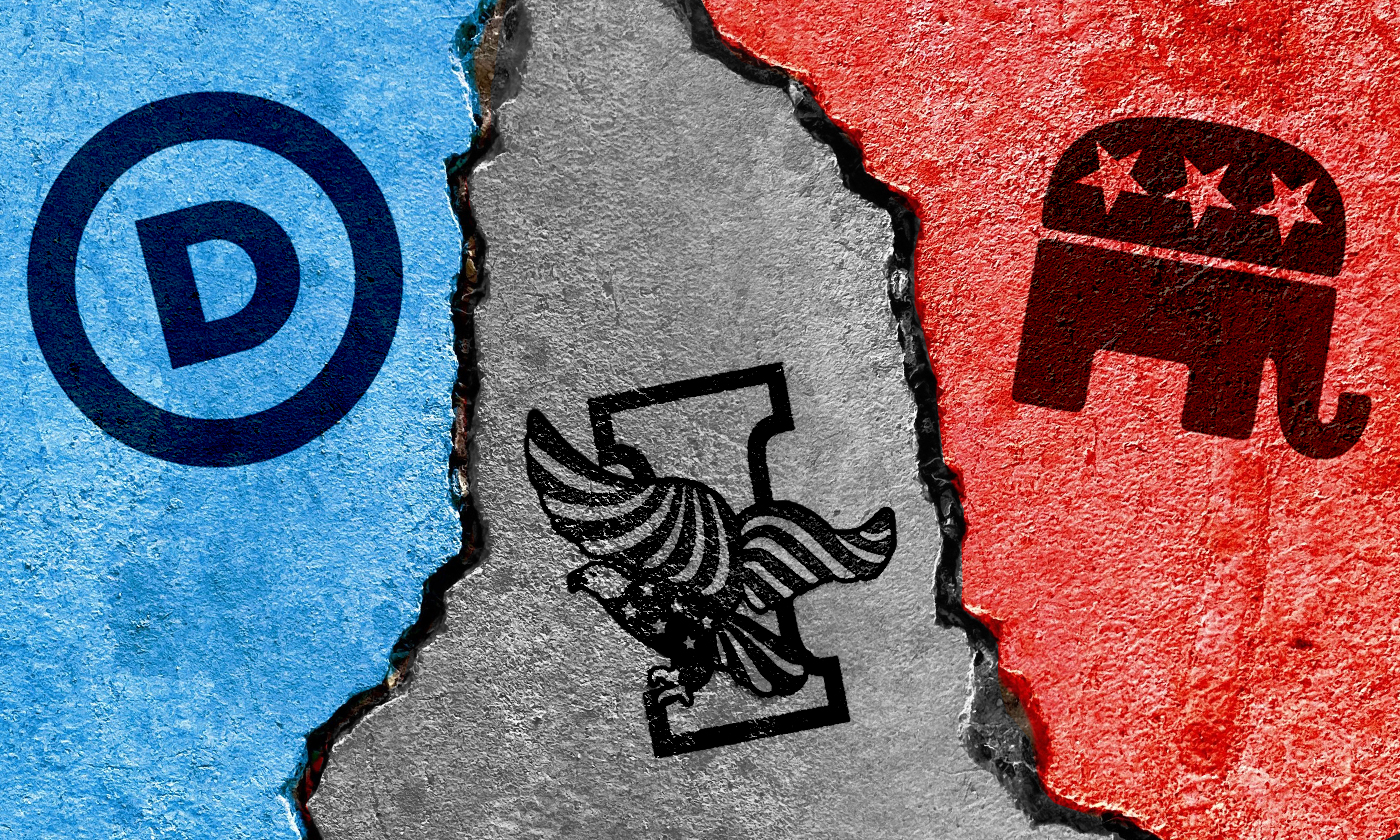 More than 230 years since the establishment of these somewhat-United States, our system of political representation still fails to adequately reflect the breadth of ideological nuance that exists among its citizens. We have two dominant political parties, two quite minor ones, and a bunch of also-rans. So as political polarization escalates, it’s only logical that efforts to create a viable third party would also re-emerge.

Enter Andrew Yang, the businessman-turned-Democratic-presidential-hopeful, and Christine Todd Whitman, the former Republican governor of New Jersey. Together, Yang and Whitman have unveiled their next act: the Forward Party, which claims to be politically centrist. “Not left, not right, FORWARD,” its website intones, trying to “fetch” a catchphrase into the vernacular.

There is a case to be made for third (and fourth, and fifth) parties in our political system. And as at least one of the major political parties further entrenches itself with the ideological far-Right, the moment could be ripe for a viable third option to fill the ever-growing chasm between Republicans and Democrats.

But the U.S. has a long history with third parties that never amounted to anything. This is, in part, because there has been a fair amount of ideological wiggle room within the two major parties for political questions of the day, since those parties coalesced in the mid-19th century.

Since the Civil War, Southern Democrats comprised their own interest group within the party, one that was rooted in White supremacy and revisionism about the Confederacy, until they began to peel away in 1948, after President Harry Truman announced the desegregation of the armed forces. These “Dixiecrats” won four Southern states in the 1948 general election, in which they nominated then-South Carolina Gov. Strom Thurmond to appear as the “official” Democratic nominee on ballots in those four states. The party didn’t survive as an entity after 1948, and by 1964, when the Civil Rights Act was passed, almost all the Dixiecrats and their allies had joined the Republican Party.

This, by historical standards, was one of the more successful third-party movements in the U.S. Because the movement was governed by a common ideology (support for segregation), it was clear on its goal—not to win the presidency, but rather to upset the traditional power structure in the South, possibly by forcing the election into a vote in the House of Representatives. In the process, the Dixiecrats’ revolt broke the hold the Democratic Party had on the “Solid South,” enabling the region’s eventual shift into the Republican column.

Prior to that, Theodore Roosevelt’s Progressive “Bull Moose” Party in 1912 helped Roosevelt come in second in a three-way race between incumbent Republican William Howard Taft and the winner, Democrat Woodrow Wilson.

But the most recent example of a nearly viable third party in American politics is the Tea Party movement. It wasn’t a true party, but rather, following the 2008 financial crisis, emerged as a smallish grassroots movement with a distinctly Libertarian flavor. The Tea Party was opposed to government spending and corporate taxation, but otherwise, like many Libertarians of the time, many adherents polled were more liberal on cultural issues like abortion and same-sex relationships, believing those were issues of individual rights that should not be infringed upon.

That changed when President Barack Obama was elected later that year, and the movement grew in prominence—thanks in no small part to massive financial support from conservative billionaires like the Koch brothers. By 2013, the pollster Rasmussen found that as many Americans supported the Tea Party as they did Obama, and that nearly two-thirds of Republicans had a favorable view of, or saw their views aligned with, the views of the movement. Rather than fading away after its revolutionary energy abated, the Tea Partiers found an enabler in Donald Trump, who united three right-wing political tenets into a juggernaut of anti-establishment anger: White racial grievance, Christian dominionism, and huge tax giveaways to the wealthy, which looked less like an economic policy than a wholesale looting of the republic.

During its rapid rise, the Tea Party also ceased being a grassroots movement and quickly became a major source of political astroturfing, staging fake grassroots events and protests that were actually funded by wealthy backers like the Kochs.

The Tea Party, like the Dixiecrats and the Progressives before it, was ideological. Much like political parties in other democracies, the movement’s ideological cohesion helped propel it into power.

But the irresistible force of an outsider third-party movement also runs headfirst into the immovable object of the American election system. A large amount of power is vested in the office of the presidency, and the occupant is (usually, but not always) supported by an absolute majority of the population. Single-member districts in the House of Representatives ensure that smaller parties will be disenfranchised from representing their states. By contrast, in parliamentary systems, a third party that passes a critical threshold of public support (5%, for example) usually receives a proportionate number of seats in the national legislature.

Short of instituting proportional representation in Congress and state legislatures, there just aren’t any avenues to real power in the U.S. for a small third party. And third parties have neither the money and fundraising apparatuses of the two major parties, nor the network of consultants, PACs, mailing lists, volunteers, and other affiliated non-party groups that constitute its own underground political economy.

Power resides in the parties, and that’s reinforced by mass media that treats primary elections as an inviolable part of our system, when in fact they are simply outgrowths of back-room deals made at conventions to hand-pick candidates. The Constitution, notably, says nothing about primaries or political parties.

That presents an often-insurmountable challenge to third parties, whose best results are achieved when they can influence one of the two big ones.

That’s what happened with the Republican Party, taken over by a radical movement that is now actively purging people who won’t adhere to its ideological core.

Case in point: Liz Cheney. The incumbent Republican congresswoman from Wyoming, who voted in step with the Trump administration 93% of the time, was soundly trounced in a primary election by Harriet Hageman, a relatively unknown attorney who once supported Cheney, but who was endorsed by Trump because she gave credence to Trump’s lies about the 2020 election being stolen.

Cheney, of course, was one of the few Republican elected officials to vote in favor of Trump’s impeachment after the Jan. 6, 2021, attempt to overturn the election of President Joe Biden. To add insult to the grievous injury to Trump’s ego, Cheney, as vice chair of the congressional select committee investigating Trump’s attempted coup, has pulled no punches and has emerged as one of Trump’s and his Republican enablers’ most withering critics.

In this regard, the Republican Party is coming to resemble a parliamentary party: ideological and focused on specific political goals, rather than broad-based and focused on governing. Whether that means the Republican Party becomes a much smaller entity in terms of representation remains to be seen. Several Trumpist election deniers are running for positions in state governments that oversee elections—presumably to ensure that in 2024, the next attempted coup to install Trump in power will succeed. Coupled with more widespread voter suppression, an anti-democratic seizure of power is the only way an extremist movement without a majority of popular support could win the presidency.

But if the GOP shrinks to a hard, embittered, ideological fringe movement, that presumably might create room for more parties to emerge: one moderate-to-conservative, one more mainstream liberal, one progressive.

We already have two “third” parties that might fit the bill, but they’ve largely failed to gain any real traction on the national or local scenes. The Libertarians have been around since 1972, but none has won election to anything higher than a state legislature. Michigan’s Justin Amash became the first Libertarian member of Congress in 2020, but only after having been elected as a Republican in 2010 and subsequently leaving the party in 2019. He’s now retiring.

The Green Party remains a distant fourth place in enrollment, with about 245,000 members nationwide (compared with the Libertarians’ approximately 695,000). The Greens would seem to be a natural home for eco-conscious and progressive voters. But unlike their European counterparts, who are members of governing coalitions in five countries, the U.S. Greens’ electoral results have been even more dismal than the Libertarians’, having only won a handful of seats in state legislatures since 1999. The party has a tendency to nominate either celebrity candidates (such as Ralph Nader) or complete unknowns (Jill Stein) who get labeled as spoilers.

The Forward Party would seem to be positioned for the moderate-right wavelength on the political spectrum, judging from the politics of its two most prominent members. But the Libertarian Party already occupies a similar ideological position.

And Yang’s statements have made clear the party’s outlook is non­-ideological. The party’s self-described formula is a three-step process to “fearlessly seek diverse and new ideas,” “come together around sensible solutions,” and “actually DO something.”

“We are starting from a refreshingly simple premise: Every problem has a solution most Americans can support (really),” the group’s website states. “We just have to cut out the extreme partisanship, reintroduce a competition of ideas, and work together in good faith.”

Sounds great. What country is this party going to be operating in, again?

The shallowness of this approach was on full display in Yang’s interview with CNN’s Jim Acosta, in which Yang wasn’t able to give a straight answer as to whether his party would be a spoiler for Democrats, or couldn’t say whether the party would support abortion rights, or if 18-year-olds can buy AR-15s.

That’s not a good start, and it may be the end of the party even before it starts. If Forward is to emerge as a viable party instead of a Yang-ish cult of personality, it’s going to have to answer some questions, including on the most pressing and polarizing issues we face.

But it’s either that, in which case Forward ought to get comfortable being labeled a spoiler by either Democrats or Republicans (since it’s highly unlikely they’d actually win), or Forward may hope to join the ranks of the Dixiecrats or Bull Moose Progressives and influence the larger parties. If not, it’ll join the Natural Law Party, two People’s Parties, the American Workers Party, the Know Nothing Party, the Silver Party (supporting “bimetallism”), the Personal Choice Party, and dozens of others—the roadkill on the shoulders of America’s political highways. They may be good for a headline or a punch line, but once they strut their hour on the stage and exit, they’re quickly forgotten.