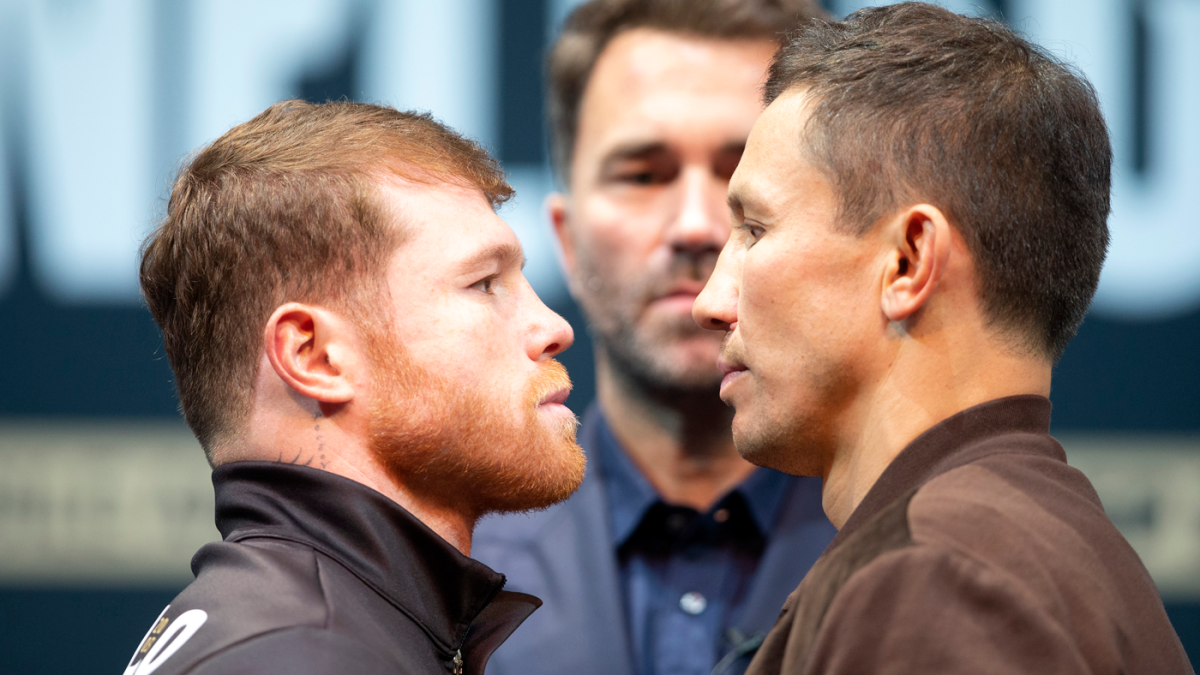 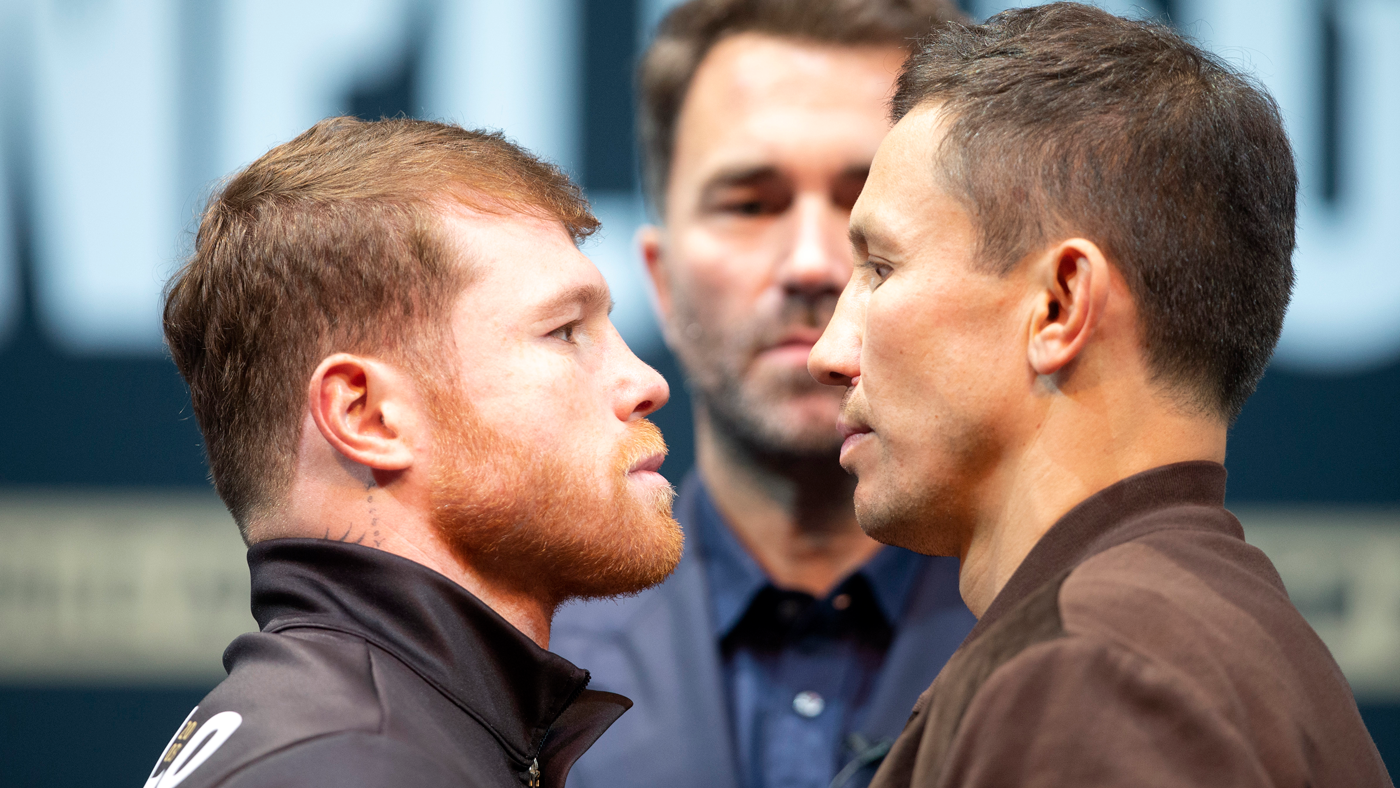 If you’re wondering why it took four years for Canelo Alvarez and Gennadiy Golovkin to pick up where their all-action rivalry left off entering Saturday’s trilogy bout, GGG is right along there with you.

“This is not a question for me,” Golovkin told “Morning Kombat” last week. “I insisted on a trilogy the next day after the judges gave the victory to Canelo [in the rematch].”

To defend Alvarez (57-2-2, 39 KOs), the undisputed super middleweight champion only fought at middleweight once more after his 2018 rematch with Golovkin (42-1-1, 37 KOs), who still holds a pair of world titles at 160 pounds. Alvarez, 32, will look to defend his four-pack of titles this weekend inside T-Mobile Arena in Las Vegas (DAZN PPV, 8 p.m. ET — subscribe now) in the first fight of their rivalry to take place at 168 pounds.

Alvarez, who is fresh off a decision loss to WBA light heavyweight champion Dmitry Bivol in May, hasn’t seemed as if he wanted the trilogy despite how much money DAZN paid both shortly after launching in the U.S. in 2018 in hopes of landing a third fight. A big part of that was the bad blood between them, fueled not only by a pair of disputed decisions in which GGG felt robbed but also by the steroid allegations aimed at Alvarez after failing a drug test ahead of their rematch.

Asked by CBS Sports on Wednesday, however, whether he was motivated this time to accept the challenge, Alvarez changed his tune.

“Yes, I want [the trilogy],” Alvarez said. “And if people want it, I really want it. I wanted to come back strong so I’m really excited to be here. I’m ready for Saturday.”

Can’t get enough boxing and MMA? Get the latest in the world of combat sports from two of the best in the business. Subscribe to Morning Kombat with Luke Thomas and Brian Campbell for the best analysis and in-depth news, including an early preview of Canelo vs. Golovkin 3 ahead of Saturday’s showdown below.

Although it’s clear from Golovkin that he still harbors ill will toward Alvarez, who was lucky to salvage a controversial draw in 2017 before edging GGG in their rematch via disputed majority decision, he refused to go as far as saying the third fight was personal. According to trainer Johnathon Banks, who replaced Abel Sanchez after the second Alvarez fight, that’s exactly where his fighter needs to be.

“The best way for G to perform is emotionless,” Banks told CBS Sports. “Now, that might not work for every fighter but for this fighter, the best way to go into this fight is to keep it business and keep his emotions at home. If he wants to pick up his emotions in the locker room, fine. But he don’t need them in the ring. It’s going to be a hell of a fight, regardless. As the fight goes on, we definitely want the victory and want to close the third chapter of this situation. But the emotions play no part in it.”

The first two fights were PPV blockbusters and ultimately exceeded expectations as classic action fights with a high level of skill and intensity. The main difference, however, between the four-year gap between fights entering this weekend is that Alvarez has ascended the throne as pound-for-pound king across multiple divisions in the interim while Golovkin, at 40, has begun to show his age.

Golovkin, who enters as a 4-1 underdog, was the betting favorite ahead of each of the first two fights. He admitted that age has made it more difficult to recover, which is something Banks, a disciple of the late Emanuel Steward’s Kronk Gym, has worked hard on offsetting.

“It’s all about training smarter and just being more efficient in the things you do well,” Banks said. “When you are young, the goal is to train hard no matter what. When you get older, you have to train smarter. That 40-year-old guy is totally different than your average 40-year-old guy. Right now, he’s just fine tuning as much as possible so to not overwork himself.”

Still, Golovkin has looked much slower despite going 4-0 since the second Alvarez fight. He has also taken a great deal more punishment in return than fans have ever seen, including a disputed decision win over Sergiy Derevyanchenko that contended for fight-of-the-year honors in 2019.

What doesn’t help Golovkin is that Alvarez has steadily evolved in recent years from a counter boxer to a stalking knockout threat, which has come as a huge shock to those who watched him carry his power up in weight with him to 168 and 175 pounds.

Both fighters have tremendous chins and neither has been down or stopped as a professional. Golovkin, in fact, still maintains that he has yet to have been even buzzed once despite closing in on 400 combined amateur and professional fights. Still, most believe he will need to lean hard into his superpower in order to have a shot at upsetting his more fresher foe.

“I use this motto all the time: I would rather have it and not need it than need it and not have it,” Banks said. “I agree that it’s going to be a hell of a fight. My wish and desire is for G to close the show in dramatic fashion but, believe me, Canelo can take a punch, too. He’s no pushover from taking shots from much bigger guys. He took right hand after right hand from G that 90% of people fell from and never recovered. He took it like it was a piece of meat and he ate it and kept coming.”

Alvarez, who has openly said he’s preparing to deliver the knockout this weekend and remove any lingering talk of controversy, believes the third (and presumably final) meeting between the two living legends will also be the most exciting.

“This fight is very important for my legacy because it will remain in the history of boxing after this fight. That’s why we fought the three times, right? I think this is one of the best rivalries in boxing history.”

It was Albert Einstein who once described the definition of insanity as doing the same thing over and over while expecting different results. For Golovkin, Saturday’s trilogy will take place in the same ring, against the same opponent and in front of the same state commission as the first two fights, which he believes he was robbed from winning.

Golovkin will also be boxing in front of two judges who have played a major role in the proceedings up to this point: Steve Weisfeld scored the rematch 115-113 for Alvarez, as did Dave Moretti, who also had it 115-113 for Golovkin in the first fight. Judge David Sutherland, a newcomer to this rivalry, rounds out the trio alongside referee Russell Mora.

Six different scorecards have been submitted during the two fights and only one of those have had Golovkin winning. Aside from any potential corruption that GGG has often implied, there appears to be a big reason why those tasked with declaring a winner have ultimately favored Alvarez.

Although Golovkin has outlanded Alvarez by an average of 40 total punches over both fights, Alvarez has held the edge in power punches landed, power punching percentage and body shots. Should GGG apply the same exact strategy to try and solve Alvarez without amping up the risk he’s willing to take to offset his loss of speed and stamina, not only is a repeat decision loss likely in order, so could be the first stoppage of his great career.

Golovkin connected on just six and eight body punches landed, respectively, in the first two fights. He also had trouble landing his right hand in any form against the much quicker Alvarez, who utilized precise upper trunk movement to avoid said shots while opening up countering opportunities.

On paper, Golovkin’s jab-heavy style is the perfect blueprint to give Alvarez fits. He cuts off the ring as well as anyone historically and can use his jab as both rangefinder and weapon. It’s a blueprint, one can argue, that Bivol used to solve Alvarez in May.

But in this case, Bivol was a natural light heavyweight. Golovkin will be moving up to super middleweight for the first time, meaning the size advantage he once held over the former junior middleweight in Alvarez has since been deleted by the Mexican star’s dramatic rise in weight.

Does GGG need to go for broke and seek the knockout as his only hope of winning? Not necessarily, especially given Alvarez’s equally stubborn chin. But he will need to fight as physical as he ever has in the clinch to slow down his opponent and he will need to show a level of urgency that simply hasn’t been there late in his biggest (and closest) fights before.

Expect Alvarez to start slow and efficient while trying to navigate just how much juice GGG has left. But once he makes the adjustment to come forward, similar to what Alvarez did in the rematch, weakening Golovkin to the body late while walking him down seems likely.

Given Golovkin’s pride and his incredible punch resistance, it wouldn’t be a major surprise that this rivalry reached a 36th and final round. But make no mistake about Golovkin’s real chances. Unless he’s willing to significantly alter his style to offset his physical decline and take gambles in ways we haven’t seen before, a second straight decision loss feels inevitable.