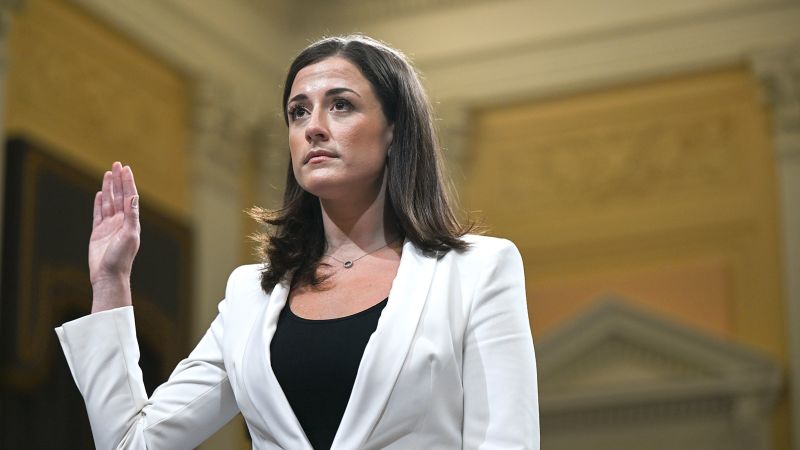 Hutchinson, whose cooperation has not previously been reported, became a prominent witness during a summer hearing for the House select committee investigating the January 6, 2021, Capitol Hill insurrection.

The former top aide to then-White House chief of staff Mark Meadows could offer Georgia prosecutors insights about what she witnessed in the West Wing, as well as steps her former boss took specifically when it came to Georgia.

Prosecutors have called for Meadows to testify before the special grand jury, but they are still working to secure his testimony. A hearing on the matter is scheduled for late October.

Meadows was among the participants on the January 2021 call between Trump and Georgia’s secretary of state Brad Raffensperger, and Meadows also made a surprise visit to a Cobb County location in December 2020, where officials were conducting an absentee ballot signature audit.

Hutchinson has also been cooperating with the Justice Department, which also faces a pre-election quiet period, in its criminal investigation into efforts to subvert the 2020 election.

An attorney for Hutchinson did not respond to CNN’s requests for comment.

Fulton County District Attorney Fani Willis has said the Georgia probe is shifting into a quieter mode to avoid any appearance of influencing the upcoming midterm election. Legal experts told CNN she could still use that time to have the special grand jury pore over information it has already obtained and work on the final report it will issue when its investigation is complete.

CNN previously reported that Willis is aiming to swiftly wrap up her probe after the midterms and could begin issuing indictments as soon as December.

A spokesperson for the district attorney’s office declined to comment.