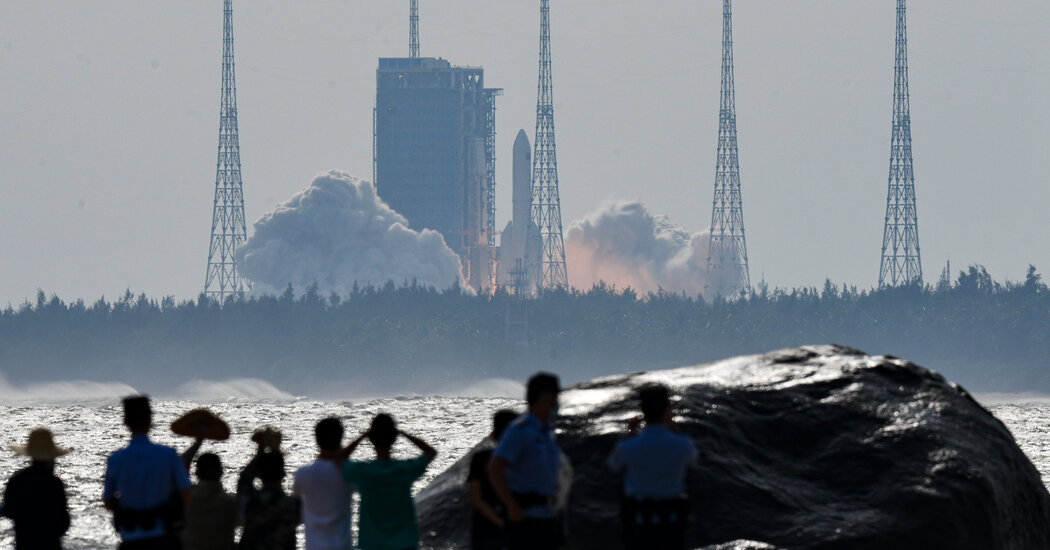 Early on Friday morning, pieces of a 23-ton Chinese rocket stage tumbled back to Earth in the Pacific Ocean, the United States Space Command reported in a pair of tweets.

It was China’s latest round of celestial roulette involving a deliberate uncontrolled atmospheric re-entry. The rocket stage, by design, did not include a system to guide it into a specific spot on Earth, far away from people.

That led to nervous sky-watching around the world. As it had three times before in 2020, 2021 and earlier this year, China launched a Long March 5B rocket, one of the most powerful rockets in operation today, on Monday to transport a third and final module of its Tiangong space station, the centerpiece of a space program that is second only to NASA’s in technological sophistication.

Each time, China has successfully gambled that the rocket’s parts would not cause injury to people on the ground. But while there were no immediate reports of damage, Friday’s re-entry did cause disruption, including a closure of Spanish airspace that delayed hundreds of flights in the morning. A rocket of the same design is expected to be used again at least once more, in 2023.

Other space agencies and experts have been critical of the four rocket launches. Bill Nelson, the administrator of NASA, issued a statement criticizing the Chinese for not taking more precautions, as he had for similar launches in April 2021 and July this year.

“It is critical that all spacefaring nations are responsible and transparent in their space activities,” Mr. Nelson said, “and follow established best practices, especially, for the uncontrolled re-entry of a large rocket body debris — debris that could very well result in major damage or loss of life.”

The Long March 5B booster is not the only human-made object, or even the largest, to ever fall from space. And pieces of spacecraft from other countries, including the United States, have also fallen back to Earth recently — including a small piece of a SpaceX vehicle that turned up on an Australian sheep farm in August.

But experts emphasize that such incidents differ from China’s use of the Long March 5B rocket.

“The thing I want to point out about this is that we, the world, don’t deliberately launch things this big intending them to fall wherever,” Ted Muelhaupt, a consultant for the Aerospace Corporation, a nonprofit group largely financed by the U.S. government that performs research and analysis, said in a news conference on Wednesday. “We haven’t done that for 50 years.”

However, Zhao Lijian, a foreign ministry spokesman, on Friday rejected the notion that China’s handling of the Long March 5B rockets represented anything unusual. “I would like to stress that China has always carried out activities in the peaceful use of outer space in accordance with international law and international practice — re-entry of the last stage of a rocket is an international practice,” he said.

Mr. Zhao added that the Long March 5B had been designed to pose less danger upon re-entry. The rocket “is designed with special technology; most of the components will burn up and be destroyed during the re-entry process, and the probability of causing harm to aviation activities and on the ground is extremely low,” he said.

On the same day Mr. Zhao spoke, Spanish civilian aviation authorities closed off and later reopened a 120-mile-wide swath of its airspace along the predicted trajectory of the booster. The 40-minute airspace closure delayed 300 flights by an average of 30 minutes, the authorities said.

The China Manned Space Agency issued a statement in the final hours before the core booster crashed, providing the altitude of the perigee and apogee of the core’s decaying orbit, along with the inclination of the orbit.

The U.S. Space Command first announced that the rocket stage re-entered in the south-central Pacific Ocean. In a follow-up posting, the command said there was a second re-entry to the northeast.

Jonathan McDowell, an astrophysicist at the Harvard-Smithsonian Center for Astrophysics who tracks human-made objects in low-Earth orbit, said that suggested that the rocket stage had broken into two as it entered the upper atmosphere.

The China Manned Space Engineering Office reported that the booster re-entered at 6:08 a.m. Eastern time at a spot in the Pacific south of Mexico and west of Nicaragua.

“Most of the components were destroyed during re-entry,” the Chinese statement said.

The risks of falling debris depended on where you live.

Because of the orientation of the orbit, if you live somewhere like Chicago or farther north — that includes almost all of Europe and all of Russia — the odds of being hit were always zero. The last few orbits also completely missed Asia and South America, so no one on those two continents ever had to worry.

For people elsewhere, the chances of being hit were minuscule, although not quite zero.

“You’ve got far better odds of winning the lottery” than of being hit by part of the Chinese rocket, Dr. Muelhaupt said. “The risk to an individual is six per 10 trillion. That’s a really small number.” (That is, if 10 trillion Chinese Long March 5B rocket boosters fell out of the sky, six of them would hit you personally.)

On Wednesday, he put the odds that all of the nearly eight billion people on Earth would survive unscathed at 99.5 percent.

But the 0.5 percent possibility that someone could have been injured or killed is “high enough that the world has to watch and prepare and take precautionary steps, and that has a cost, which is unnecessary,” Dr. Muelhaupt said.

China for the moment relies on the Long March 5B for carrying its heaviest payloads to space. The rocket consists of a large center booster and four smaller side boosters. The side boosters drop off shortly after launch, crashing harmlessly in the Pacific Ocean. But, by design, the core booster stage goes all the way to orbit before deploying its cargo.

For this mission, the rocket carried Mengtian, a science laboratory module, for the Chinese space station, Tiangong.

Mengtian docked to China’s orbital outpost on Tuesday. Tiangong, designed to last at least 10 years, is not as big as the International Space Station — it is more comparable in size to the Russian Mir space station that orbited from 1986 to 2001. But it will establish a more permanent base in space than China’s earlier space stations, and more than 1,000 scientific experiments are planned for it in the years to come.

The Chinese rocket engineers who designed the Long March 5B did not include any way to guide the spent core booster to an empty part of an ocean.

Instead, the booster gradually falls as it rubs against the wisps of the upper atmosphere. How fast it falls depends on the air density. That varies, because the Earth’s atmosphere puffs outward when the sun is active, spewing out more charged particles, and contracts when the sun is quieter.

Chinese rocket re-entries have caused peril in the past. Two of the three previous launches of the Long March 5B ended with large chunks of metal landing near populated areas. Although no one has been injured, the proximity illustrated the dangers.

“Again, big chunks of metal have come down near where people are,” Dr. Muelhaupt said.

He said there was no indication that China had made any of the significant modifications to the rocket design that would be needed for a controlled re-entry.

China has at least one more Long March 5B launch planned, for next year, to put in orbit a space telescope, Xuntian, that would rival NASA’s Hubble space telescope.

And it is probable that debris from American rockets and spacecraft will turn up on land again, too, like the SpaceX vehicle part found in Australia.

But there is little need to worry about the upcoming flight of NASA’s massive moon rocket, the Space Launch System, the agency says. The S.L.S., the biggest rocket to fly since the Saturn V used for the Apollo missions, is scheduled to make its first flight later this month. Its center core stage travels almost all the way to orbit, but NASA officials said on Thursday that its trajectory was designed to re-enter not long after launch in a specific unpopulated area.

“It’s in an area of the ocean where it won’t affect anyone,” said James Free, the associate administrator for exploration systems at NASA.