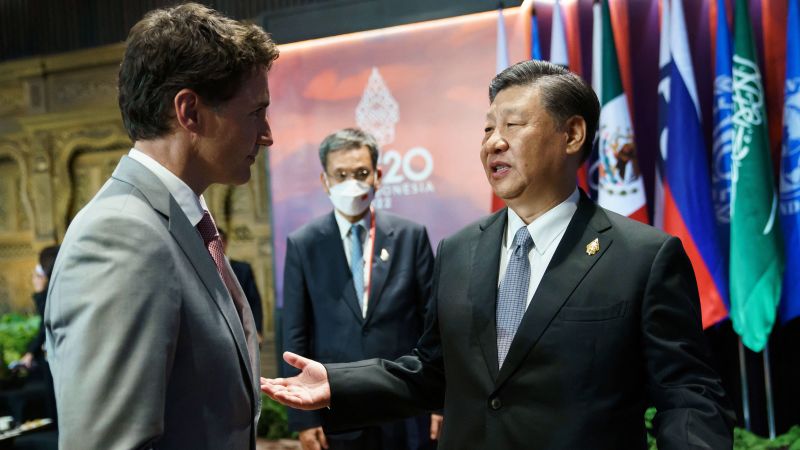 Chinese leader Xi Jinping was captured by Canadian broadcasters in a rare candid moment on Wednesday, where he was filmed chiding his Canadian counterpart, Prime Minister Justin Trudeau, over what he described as “leaked” discussions.

On the sidelines of the G20 summit in Indonesia, Xi chatted with Trudeau in Mandarin with a smile. But the English translation of what he said was a little less friendly.

“Everything we’ve discussed has been leaked to the papers and that is not appropriate,” Xi’s translator said.

Trudeau nods and Xi spoke again. “And that was not how the conversation was conducted,” the translator said.

“If there was sincerity on your part, than we shall conduct our discussion with an attitude of mutual respect, otherwise there might be unpredictable consequences,” Xi tells the Canadian leader in Mandarin.

Xi’s translator attempts to translate what was said, only getting to “If there was sincerity on your part,” before being cut off by Trudeau.

“In Canada we believe in a free and open and frank dialogue,” Trudeau said, adding “we will continue to work constructively together, but there will be things that we will disagree on.”

“Let’s create the conditions first,” the translator said on behalf of Xi in the video. The Chinese leader then shakes Trudeau’s hand and walked away with his entourage.

The exchange offers a rare glimpse of how Xi, whose public appearances are highly choreographed, interacts with other leaders.

Not every conversation will be “easy,” Trudeau said Wednesday, according to a statement he gave to the press after the exchange.

“But it’s extremely important we continue to stand up for the things that are important for Canadians. This is something we always do and we will continue to,” Trudeau said.

Their exchange comes as Xi looks to reassert China’s global influence at the summit in the island of Bali after a nearly three-year absence from the world stage.

China’s relations with United States allies have deteriorated to varying degrees in recent years, due to rising geopolitical tensions, disputes over trade and the origins of Covid-19 pandemic, as well as Beijing’s growing partnership with Moscow – despite Russia’s war on Ukraine.

Xi has sought to restore relationships at the summit, meeting with US President Joe Biden on Monday. He also held formal talks with the leaders of Australia, France, the Netherlands, South Africa, Spain, Senegal, Argentina, Indonesia and South Korea.

Canada was not afforded such a meeting, and the snub might relate to the countries choppy relationship since senior Huawei executive Meng Wanzhou was detained in Canada in 2018. Two Canadians were detained nine days later in China. All three were released in 2021.