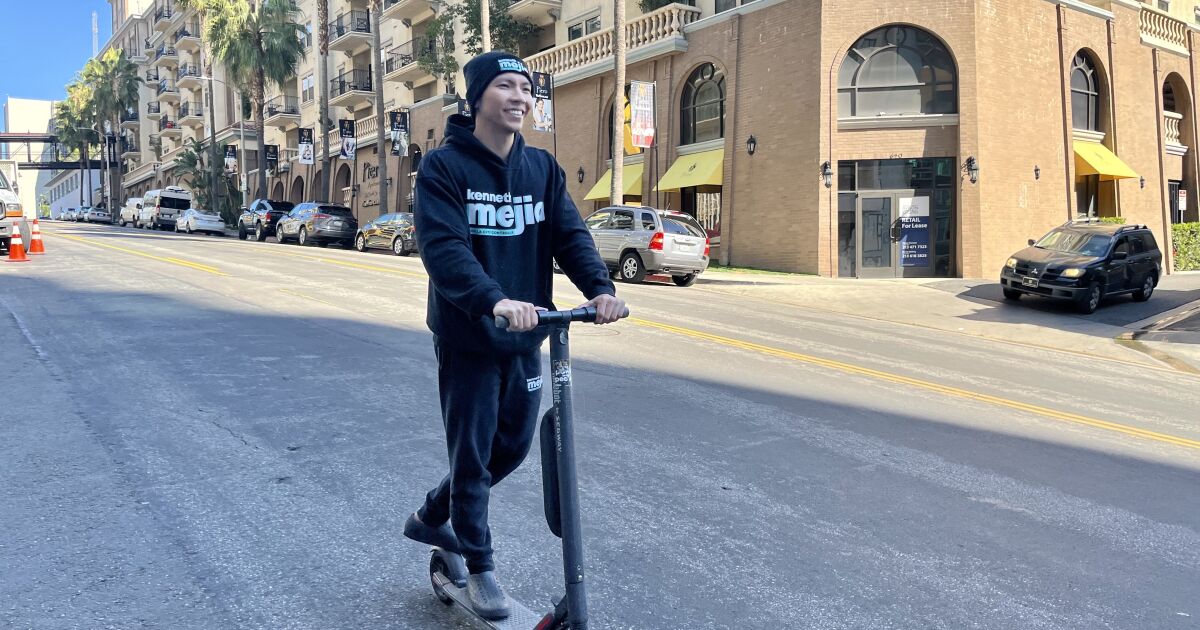 The incoming Los Angeles city controller arrived for our interview on a scooter.

Kenneth Mejia, 32, is one of the faces of a local political transformation in which a youth corps is replacing the old guard, solid Democrats are being outflanked by the new left, and politicians are being replaced by activists.

That wasn’t true in every race on the local ballot. But Eunisses Hernandez, who called for abolishing the Police Department, pushed out Councilmember Gil Cedillo.

Hugo Soto-Martinez, who was backed by the Democratic Socialists of America and said Councilman Mitch O’Farrell might as well be a Republican, easily booted O’Farrell out of City Hall.

And in the race for controller, Mejia, an accountant whose mother was born in the Philippines, blitzed longtime City Councilmember Paul Koretz by 20 points, becoming the first Asian American to hold citywide office in Los Angeles. He’ll succeed Ron Galperin in three weeks.

Mejia rolled up to his campaign office on Wilshire Boulevard a few days ago plastered in campaign gear, with “Mejia for Controller” stamped onto his dark blue hoodie, beanie and sweatpants. On his back was a pie chart with a city budget summary for the year 2021-22, with 46% of unrestricted revenues going to the LAPD.

I had connected with Mejia last year, when I was writing about L.A. firefighters who refused to get vaccinated, racked up staggering amounts of overtime pay and lived out of state. Mejia, a candidate at the time, was already acting like a controller, and he had tweeted a list of the 20 top-paid city employees in the first nine months of 2021.

Mejia had found that 18 of the 20 worked in the Fire Department, and that each of them had taken home more than $500,000 through September, counting benefits and overtime pay.

“People have a lot of questions about how the city operates and how the money is spent … and that’s my specialty,” Mejia told me in his campaign office.

As part of his campaign, Mejia produced a map of affordable housing units with instructions on how people could apply for them. He identified the areas where the most parking tickets were being written. And he crunched data during the City Council debate on banning homeless encampments near schools and day-care centers, finding that 20% of the city would be off limits to tents.

He also managed to break the rules of traditional campaigning in ways that galvanized support, especially among young people.

He donned a Pokémon costume, the Pikachu character, and danced in Little Tokyo.

He danced again, with campaign staffers, in a TikTok video drawing attention to police and firefighters living out of state.

He used his two corgis as campaign greeters and pummeled Koretz, who led a City Council animal services committee, over inhumane conditions at city shelters.

Along the way, Mejia ruffled the feathers of the establishment, which questioned his qualifications and worried about him politicizing a department that exists as an oversight branch of government.

Former City Controller Laura Chick called him erratic and extreme and said he was “unfit for public office.” She noted that Mejia had posted tweets calling President Biden a racist and rapist, and while campaigning for the Green Party candidate for president, he’d tweeted a photo of himself holding up a photoshopped image of Hillary Clinton behind bars.

“Definitely, I regret doing those things,” Mejia told me. He said that despite his political differences with establishment figures, the way he “expressed” himself is “definitely not how I would have done it today.”

To Chick’s point, I think Mejia lost a lot of votes for those bombastic tweets, and yet he won in a landslide. And though Mejia said he has regrets, there’s an unapologetic, anti-establishment swagger among some of the young progressives and absolutists banging at the doors of power in L.A. Candidate forums have been disrupted and f-bombs fly at City Council meetings.

You can question the tactics, but you can’t dispute the existence of a multiracial movement backed by labor activists, community organizers and those fed up with City Hall corruption, the racism scandal, and all the crippling unresolved issues, such as homelessness, the affordable housing crisis and wages that don’t cover the rent.

Mejia, who grew up in the San Fernando Valley, said his parents divorced when he was 7 and his mother essentially raised him and his three older siblings on the money she made as a registered nurse. His interest in social justice is rooted, he said, in having watched his single mother’s struggles.

Mejia became an activist with the Los Angeles Tenants Union, he made three unsuccessful runs for Congress on the Green Party ticket, and he became a Bernie Sanders disciple in 2015 when the Vermont senator ran for president.

“Millennials or Gen Zs, when we see someone in politics who actually cares about issues that you care about, especially helping those who are low-income or those who have been marginalized by systems, whether it’s housing or homelessness, or criminal justice or police, or the environment … it’s a shock and it’s rare,” Mejia said.

The people who supported him and other progressives, Mejia said, “are sick of the status quo.”

That may be true, but the city controller has no direct authority over the mayor or City Council, who can choose to ignore audits and pronouncements. But Mejia thinks that by exposing inefficiencies and questioning spending priorities, he can educate voters and elected officials and possibly influence policy.

As for the LAPD, he said, “we just want to figure out … how is that $3.2 billion being used? Is it being used … efficiently for public safety?”

On homelessness, Mejia said, he wants to “see where the money is going.” On housing, he wants to look at what the city Housing Department is doing “to facilitate more affordable housing.”

Mejia said he has no interest in using the job as a steppingstone to run for mayor or some other office. I asked how he’ll draw a line between auditing departments and pushing a political agenda.

He said the job is to produce data, see whether “performance metrics” are being met, and hold the mayor and City Council accountable.

“Regardless of how I feel or see things, people need to know how their tax dollars are being used,” he said.

In three weeks, a young man shunned by the establishment will be watching over it.

Mejia will run a department of more than 160 people.

He said the dress code will be casual.