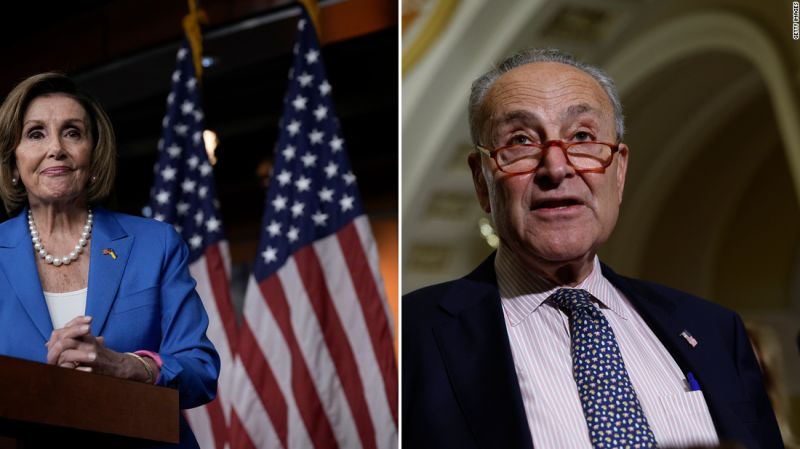 Lawmakers are set to return on Monday after being away for several weeks campaigning for the crucial midterm elections.

They face a jam-packed legislative to-do list before the new congressional session begins in January.

With that in mind, Democratic leaders are eager to bring several bills to the floor for votes during the lame duck session – the period after the midterms and before the new Congress begins.

The busy agenda includes: Funding the government to avert a shutdown before the end of the calendar year, passage of the National Defense Authorization Act, or NDAA, the annual must-pass legislation that sets the policy agenda and authorizes funding for the Department of Defense, a vote in the Senate to protect same-sex marriage and possible consideration of other key issues.

While the House is able to pass legislation by a simple majority, Democrats in the Senate face an uphill climb given their narrow majority. With a 50-50 partisan split in the Senate, Democrats lack the votes to overcome the filibuster’s 60-vote threshold – and do not have enough support within their party to abolish the filibuster, as many are anxious to do. Therefore, major priorities for liberal voters – like the passage of legislation protecting access to abortion after the Supreme Court overturned Roe v. Wade – are expected to remain out of reach for the party for the foreseeable future.

Democrats, who currently control both chambers, are returning with a new reality in the wake of Tuesday’s election they did not expect: Key races that will determine the balance of power in the House have not been called, and CNN has not yet projected who would control the House. While Republicans still appear likely to win enough seats to control the chamber, it would likely be with a narrower margin than originally anticipated.

On Saturday, CNN projected that Democratic Sen. Catherine Cortez Masto of Nevada will win reelection, meaning the Democrats will continue to control the Senate once the news session of Congress starts in January. But with a runoff election set for Georgia’s US Senate seat set for December 6, the final make-up of the chamber won’t be known until at least then.

At a news conference Sunday, Senate Majority Leader Chuck Schumer warned of a busy lame-duck session, promising “heavy work” and “long hours,” though he declined to get into specifics, saying he first needs to talk to his caucus about their agenda.

Congress passed a short-term funding bill in September that is set to expire December 16, making funding the government the number one priority for Congress when they return from recess.

Because the legislation must be passed, it could attract additional measures that Democrats want to clear during the lame duck session. For example, additional financial support for Ukraine as it continues to defend itself against Russia. While that funding has bipartisan support, some conservatives – such as Rep. Kevin McCarthy of California, the top House Republican who is expected to become speaker if his party eventually wins the chamber – are balking at the pricey contributions and are vowing to scrutinize more closely additional requests from the Biden administration, a dynamic that is dividing Republicans.

Democrats also want more funding for the Covid-19 pandemic, but Republicans are not likely to support that request. Democrats may also seeking more money for the Department of Justice investigation into the January 6, 2021, attack on the Capitol.

Congress also has to pass the defense bill. Consideration of the wide-ranging bill could spark debate and a push for amendments over a variety of topics, including whether to punish Saudi Arabia for its recent decision to cut oil production.

Senate Democrats will also continue confirming judges to the federal bench nominated by President Joe Biden, a key priority for the party.

A Senate vote on codifying same-sex marriage is also on tap. In mid-September, the chamber punted on a vote until after the November midterm elections as negotiators asked for more time to lock down support – a move that could make it more likely the bill will ultimately pass the chamber.

The bipartisan group of senators working on the bill said in a statement at the time, “We’ve asked Leader Schumer for additional time and we appreciate he has agreed. We are confident that when our legislation comes to the Senate floor for a vote, we will have the bipartisan support to pass the bill.” The bill would need at least 10 Republican votes to overcome a filibuster.

Schumer has vowed to hold a vote on the bill, but the exact timing has not yet been locked in. Democrats have pushed for the vote after the Supreme Court overturned Roe v. Wade, sparking fears that the court could take aim at same-sex or inter-racial marriage in the future.

Votes are likely on bipartisan legislation that would make it harder to overturn a certified presidential election, a response to former President Donald Trump’s efforts to block the 2020 election results, which led to the siege of the Capitol. It is supported by Senate Minority Leader Mitch McConnell, a Kentucky Republican. If the bill passes the Senate, it would also need to clear the House, which in September, passed its own version of the legislation.

Meanwhile, it’s not yet clear when exactly the nation will run up against the debt limit and it appears unlikely for now that Congress will act to raise it during the lame-duck session, especially as other must-pass bills compete for floor time. But political battle lines are already being drawn and maneuvering is underway in Washington over the contentious and high-stakes issue. Democrats are insisting it would be irresponsible to cause a damaging default over paying for bills already accrued. While Republicans are digging in and insisting that they will only approve a debt limit hike if Democrats agree to cut spending moving forward.

At his news conference Sunday, Schumer vowed to “look at” the issue over the next few weeks, but said he needs to talk to the other members of leadership and see where the makeup of the House ultimately lands.

“The debt ceiling, of course, is something that we have to deal with. And it’s something that we will look at over the next few weeks,” Schumer said. “I have to talk to the leadership first. We don’t know where the House is going to be.”

Congress does not need to raise the nation’s borrowing limit until sometime next year, but there’s been some internal debate over whether Democrats should try to raise before the end of this year, especially if Republicans wind up in control of the House.

McCarthy thrust the issue to the forefront with comments last month that echoed those of several colleagues.

“If people want to make a debt ceiling (for a longer period of time), just like anything else, there comes a point in time where, OK, we’ll provide you more money, but you got to change your current behavior,” he said in an interview with Punchbowl News.

Minnesota Democratic Sen. Amy Klobuchar summed up the busy work period ahead in an interview with “CNN This Morning” on Thursday.

“In Washington, we have a bunch of things on our plate, including getting the defense bill done with Ukraine right before us and the strides that (Ukraine’s President Volodymyr Zelensky) is making against Vladimir Putin,” she said. “On our plate is the end-of-the-year budget bill to make sure we get that right, As you know the Electoral Count Act, an effort that I’m leading with (Maine Republican Sen.) Susan Collins and (West Virginia Democratic Sen.) Joe Manchin and others, so we don’t have January 6 happen again. All of that is immediately when we get back.”