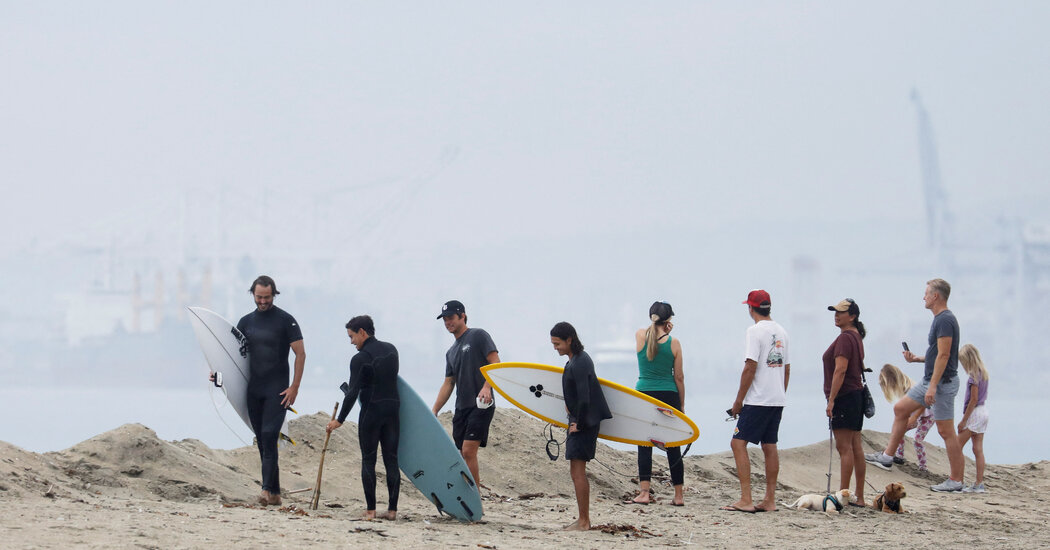 LOS ANGELES — For more than a week, Californians endured a heat wave that broke records, pushed the state’s energy grid to the brink and parched the landscape, creating conditions ripe for catastrophic wildfires. Several new blazes ignited and quickly burned through bone-dry vegetation, sending thousands fleeing from their homes.

So residents felt exalted when Saturday came cooler and wetter than prior days.

“Thankfully, this historic heat wave is coming to an end,” said Cory Mueller, a meteorologist with the National Weather Service in Sacramento, where temperatures reached a record 116 degrees on Tuesday. “It’ll almost feel cold out there today compared to last week.”

He added: “That’s obviously kind of a joke, because it’ll still be in the 90s.”

Forecasters in Southern California predicted temperatures in the 80s on Saturday, as well as continuing scattered showers from the remnants of Tropical Storm Kay, which brought rain to much of the state. In Los Angeles, residents woke up to gray skies and stepped into damp humidity that felt more like a rainforest than the drought-stricken coastal desert they had grown accustomed to.

For firefighters battling the state’s most dangerous blazes, Saturday morning came with sighs of relief.

In Riverside County, east of Los Angeles, officials had expressed concerns that the rare brush with a tropical storm would make it much more difficult to fight the deadly Fairview fire, which killed two people and injured one more not long after the blaze started on Monday. Officials were worried that the storm would bring winds that would fan flames and that heavy rain could trigger flash flooding and mudslides.

But by Friday night, officials said that winds were much less intense than feared. And overnight, steady rain helped firefighters control the blaze, which had burned more than 28,300 acres and had destroyed or damaged about 30 buildings as of Saturday morning.

“There was fairly heavy rain overnight — probably the brunt of what Tropical Storm Kay was going to bring — over the area,” said Rob Roseen, a spokesman for Cal Fire, the state’s firefighting agency.

There were no reports of flash flooding or debris flows in the region.

Although the rain didn’t reach the Sierra Nevada foothills northeast of Sacramento, where the Mosquito fire continued to rage uncontrolled, the authorities said that the cooler temperatures and humidity on Friday through Saturday were crucial.

The fire continued to grow overnight to almost 34,000 acres as of Saturday morning. About 6,000 people in remote communities had been forced to evacuate, but officials said the fire’s recent spread continued to be slower than the rapid growth on Thursday and this weekend could be key in getting a handle on the blaze if the weather remains consistent.

“Are we out of the woods yet? No, there’s still a long firefight ahead of us,” Rob Scott, a fire behavior analyst at the U.S. Forest Service, said on Saturday. But he added that the cooler weather and cloudiness were encouraging. “That’s going to help firefighters get a toehold in the environment and start containing the fire,” he said.

Mr. Mueller, the Sacramento meteorologist, said that the outlook was positive. Humidity was expected to be as high as 40 percent by Monday, up from the single digits over the past week.

“That is good news for fire operations,” he said. “The next week looks promising.”