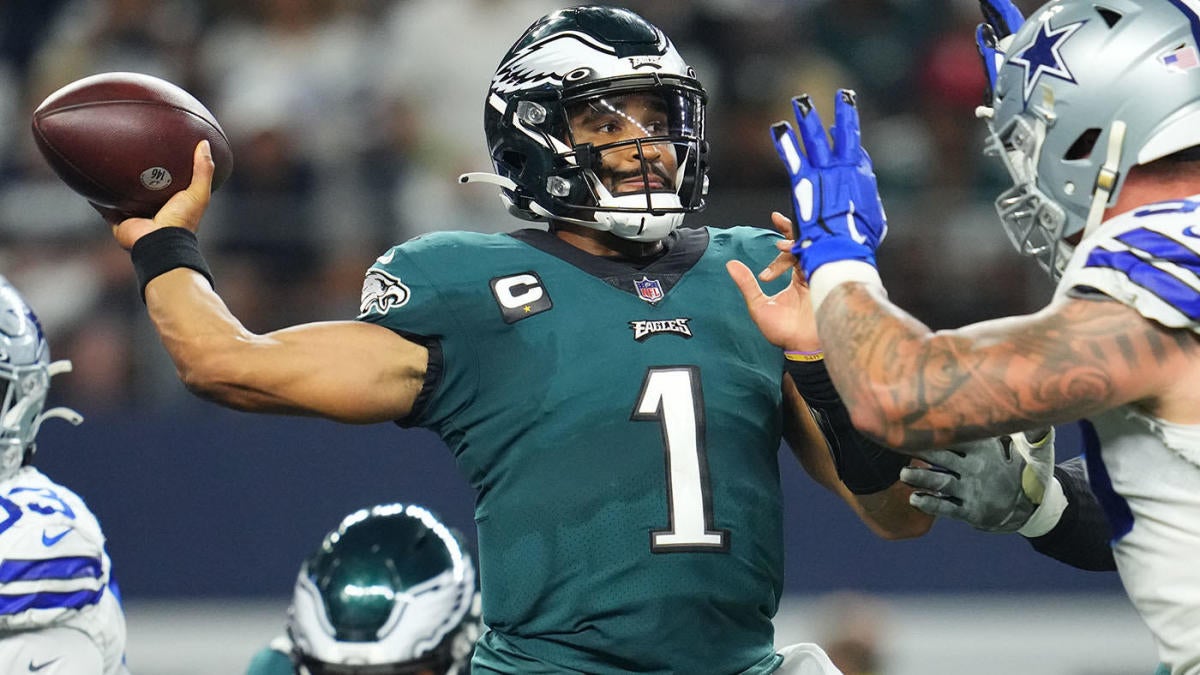 The Philadelphia Eagles and Dallas Cowboys will put a bow on Sunday’s action for Week 6 in the NFL when these NFC East rivals square off in prime time. On top of battling it out for the top spot in the division, it’s not hyperbole to say that this could very well be a preview of the NFC Championship.

Philly is 5-0 to begin the season and Dallas has ripped off four wins in a row, despite losing quarterback Dak Prescott due to a thumb injury. A large part of both of these teams’ success has been stellar play on defense, each ranking inside the top 10 in the NFL in DVOA on that side of the ball.

Here, we’ll specifically be looking at the different betting angles that this game has to offer. Along with the spread and total, we’ll also take a look at several player props and hand in our picks for how we see this showdown unfolding.

Back when this line first debuted in the spring, the Eagles were just a slim 1-point favorite. Fast forward to the season and the lookahead had Philly laying 5.5 points, which is likely due to a combination of its undefeated start and, of course, Prescott getting hurt in Week 1. Leading into Week 5, this number did see some movement, climbing as high as Eagles -6.5. That came down in the aftermath of Week 5, but has since jumped back up to that number and sits at Eagles -6.5 to wrap up the week.

The pick: Eagles -6.5. This is going to come down to Philadelphia’s offensive line diluting the impact of Dallas’ pass rush. Per Pro Football Focus, the Eagles have the highest pass-blocking grade in the NFL, but the Cowboys boast the top-graded pass rush, so something will need to give here, especially when you look at Jalen Hurts’ splits when he is/isn’t facing pressure. When pressured, his passer rating ranked 22nd in the league. With no pressure, he’s fifth. The Eagles do have the personnel to fend off Dallas enough for Hurts to find success and win the game by a touchdown. Speaking of Hurts, he’s 4-0-1 ATS in his career as a home favorite, which includes a 2-0 SU and ATS record this season.

This total initially opened at 51 but has sunk considerably, likely due to the dominant defenses that each of these teams possess. The lookahead had the total at 45.5 and it’s only gone down from there, now sitting at 42.

The pick: Over 42. Going a little against the grain here. The Under is 7-3 between these teams this season, but this number still feels a bit too low, despite both of these clubs sporting dominant defenses. Philadelphia has routinely gotten up on teams in the first half, averaging a league-high 21.2 points per game through the opening two quarters. Will they drop 20-plus points in the first half against Dallas on Sunday? Probably not, but they should have a respectable enough day offensively to get into the mid-to-high 20s, which requires light work from the Cowboys,

Key trend: Over is 6-1 in the Eagles’ last seven home games.

The Under on Rush’s rushing yards seems to be a good play here. While there’s always the risk of the Eagles flushing him out of the pocket and forcing him to scramble for yards, we always have the kneel-downs in our back pocket to move his totals in our direction. In his four starts, Rush has only gone over this prop once (Week 4 vs. Commanders) and he has two games where he’s rushed for negative yards. I’d also slightly lean Over on Rush’s passing yard total, despite the Eagles holding opposing quarterbacks to one of the lowest passing-yards-per-game average in the league. He’s gone over this number twice in his four starts and I expect Dallas to be trailing in this game, which will force Rush into more pass attempts.

The Over on Hurts’ rushing yards prop is a good way to look here. On top of the design runs that he’ll have in this offense, the Cowboys will apply pressure on Hurts, which will force him to tuck and run. Hurts is also averaging 13.6 rushing attempts per game this season and has gone over this number in three of his five games played. His anytime touchdown prop at +123 isn’t exactly great value, but it’s worth some attention as he’s rushed for a score in all but one game this season. If you’re feeling bold, Hurts is 7/1 to score two or more touchdowns in this game, which is something he’s already done twice this season.

Tony Pollard total rushing yards: Over 32.5 (-113). Pollard has been a home run hitter for the Cowboys this season, owning the club’s longest running play and receiving play of the season entering Week 6. He’s gone over this number in three of his five games played this season and is facing an Eagles defense that ranks 20th in DVOA against the run.

DeVonta Smith total receptions: Over 4.5 (+126). Simply like the value here. A.J. Brown should garner most of the attention of the Cowboys secondary and Smith has seen his volume in the passing game increase as of late. In two of his last three games, he’s seen 12 and 11 targets. He’s also gone over this catch total in three of his five games this season and has caught 82.4% of his targets since Week 2.