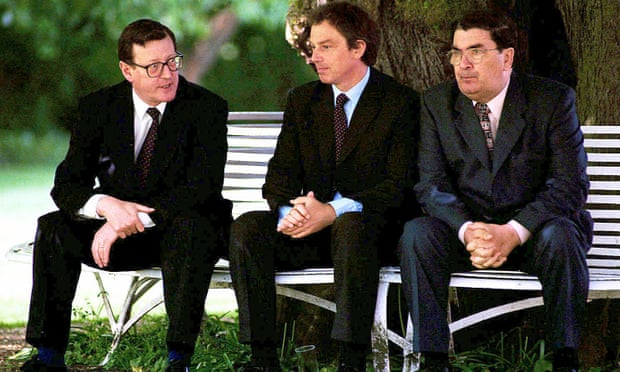 His death on Monday was announced by the Ulster Unionist Party (UUP), the party he led into a historic power-sharing arrangement between nationalists and republicans in Northern Ireland.

Lord Trimble was the first person to serve in the role of first minister, and won the Nobel peace prize, along with John Hume, leader of the nationalist SDLP party, for their part in negotiations for the Good Friday agreement. He was UUP leader between 1995 and 2005, accepting a life peerage in the House of Lords in 2006.

Tributes from across Northern Ireland’s political divide and beyond were paid to a politician whose own political journey from hardline unionism to a risk-taking partner with his sworn enemies helped end decades of strife.

Describing Trimble as “a man of courage and vision”, the UUP’s leader, Doug Beattie, said: “He chose to grasp the opportunity for peace when it presented itself and sought to end the decades of violence that blighted his beloved Northern Ireland.”

“He will forever be associated with the leadership he demonstrated in the negotiations that led up to the 1998 Belfast agreement.”

Trimble had demonstrated bravery and courage while battling his recent illness in a way that was typical of the qualities he showed in his political career, at Stormont and at Westminster, Beattie added.

On the nationalist side, the Sinn Féin leader, Mary Lou McDonald, said on Twitter that she was “saddened” to hear of Trimble’s death, adding: “His contribution to building the peace process in Ireland will stand as a proud and living legacy of his political life.”

Trimble’s death was announced shortly before the Tory leadership TV debate between Liz Truss and Rishi Sunak. They both paid tribute to Trimble – who joined their party in 2007 – as “a giant.”

The SDLP leader, Colum Eastwood, said Trimble had left an “indelible mark on our shared island’s story” and that without him there would not have been a Good Friday agreement.

The MP for the Westminster constituency of Foyle said: “Over the course of his political career, but particularly in difficult years of the Good Friday agreement negotiations, he demonstrated immense courage and took political risks that sustained the life of our fledgling peace process.

“He doesn’t often enough get credit for it, but without David Trimble’s fortitude, there would simply have been no agreement.”

Alastair Campbell, strategist and spokesman for Tony Blair at a time when the then prime minister was engaged in paving the way for the agreement, described Trimble as someone who “could be a difficult and mercurial character, but he was the right man in the right place at the right time”.

Naomi Long, the leader of Northern Ireland’s cross-community Alliance party, said the greatest legacy of Trimble’s political career was the Good Friday Agreement and the risks he took to achieve it.

Sir Jeffrey Donaldson, the leader of Northern Ireland’s largest unionist party and a former UUP member who left over his opposition to Trimble’s pro-agreement stance, said: “David leaves a huge and lasting legacy to Northern Ireland. He can undoubtedly be said to have shaped history in our country.”

Born in Belfast in 1944, he was educated at Queen’s University before becoming a barrister and a lecturer. His involvement in politics picked up pace in the 1970s and he was involved in the Vanguard party, an extreme unionist grouping.

A return to the mainstream unionist establishment followed, however, and he rejoined the Ulster Unionist party in 1978, becoming MP at Westminster for Upper Bann at a by-election on May 17, 1990.

The high point of his career, at that point, was when he won the Ulster Unionist leadership in September 1995 after the resignation of the veteran Sir James Molyneaux.

Others paying tribute to him included the Labour leader, Keir Starmer, who said Trimble was a “towering figure of Northern Ireland and British politics”.

“A brilliant statesman and dedicated public servant, his legacy as an architect of the Good Friday Agreement will live on for ever. The people of the UK owe him an immense debt of gratitude for all he achieved for our Union.”

Trimble is survived by his wife, Daphne, and his sons and daughters, Richard, Victoria, Nicholas and Sarah.