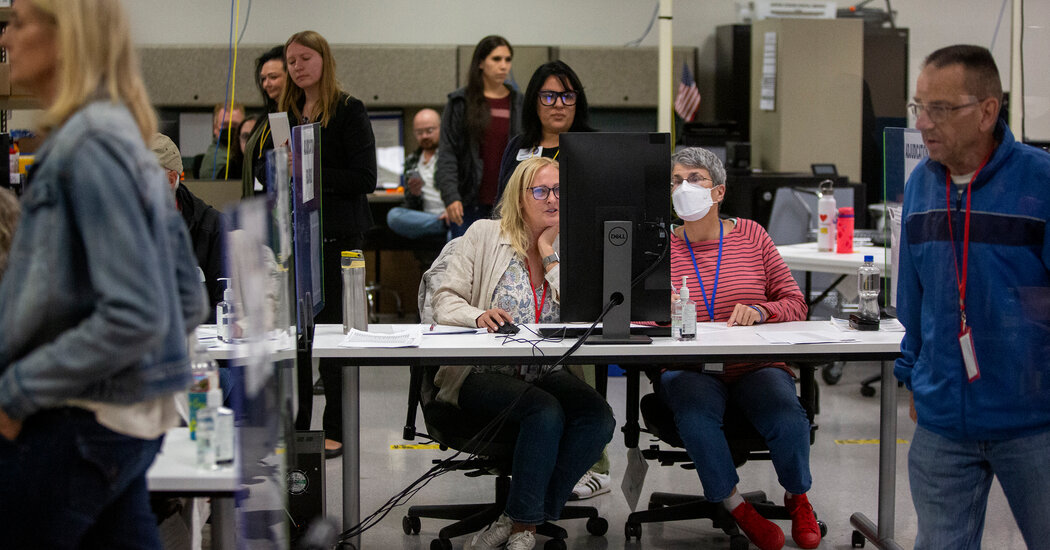 Democrats grew increasingly optimistic on Thursday that they would hold on to their control of the Senate as votes were counted in Arizona and Nevada, after chalking up vital victories in New Hampshire and Pennsylvania and watching the race in Georgia head to a runoff election in December.

Republicans need to flip at least one seat to take control of the chamber, but their path appeared to be narrowing on Thursday, with Democrats holding a shrinking but durable lead in Arizona and picking up mail ballots in Nevada at a rate that seemed to give the party a slight edge. The G.O.P.’s odds of success were greater in the House, where the party had won or was leading in the races for 221 seats, just three more than it needs to retake the chamber.

In the Senate, “I think we have a very legit chance of expanding our majority from 50 to 51,” said Senator Tim Kaine, Democrat of Virginia, pointing to the data in Arizona, Georgia and Nevada. “Very few people would have given us that chance before the election.”

Senator Chuck Schumer, the majority leader, has been checking with Democrats in Arizona and Nevada every few hours, a spokesman said, emerging more optimistic with each phone call. On Wednesday, Mr. Schumer told reporters that he was “feeling good” about keeping the Senate.

If Democrats prevail in Arizona and Nevada, they will clinch control of the Senate even before the Georgia runoff contest. This would lower the stakes of that Dec. 6 rematch between Senator Raphael Warnock and Herschel Walker, who earned significantly fewer votes than Gov. Brian Kemp on Tuesday. But it’s not clear whether that possibility would benefit Democrats or Republicans. Neither side is taking any chances: Mr. Schumer has begun raising money for Mr. Warnock, and Senate Republicans are doing the same for Mr. Walker.

She added, referring to Arizona and Nevada, “I do think they’ll win both races.”

In Arizona, Senator Mark Kelly was comfortably ahead of Blake Masters, his Republican opponent, with 70 percent of ballots counted. Mr. Kelly’s lead of five percentage points was likely to shrink, Democrats said, but not by enough to put Mr. Masters on top. On Wednesday, Mr. Kelly won a batch of mail-in votes in Maricopa County, the state’s largest and home to Phoenix, by 15 points. Approximately 600,000 votes are left to be counted.

The race in Nevada, which was among the states hit hardest by the pandemic and by inflation, is much closer. Polls suggested for months that Senator Catherine Cortez Masto was struggling and that she would need to lean heavily on the turnout operation built by her predecessor, Senator Harry Reid. This year was the first midterm election in which Nevada sent every voter a mail-in ballot, adding a new wrinkle of uncertainty.

Hillary Schieve, the mayor of Reno, who is officially nonpartisan but is an ally of Ms. Cortez Masto, said that at this point, “I would be surprised if she doesn’t make it,” adding, “I do think she’ll prevail.”

Who Will Control Congress? Here’s When We’ll Know.

Much remains uncertain. For the second Election Day in a row, election night ended without a clear winner. Nate Cohn, The Times’s chief political analyst, takes a look at the state of the races for the House and Senate, and when we might know the outcome:

How we got here. The political conditions seemed ripe for Republicans to make big midterm pickups, but voters had other ideas. Read our five takeaways and analysis of why the “red wave” didn’t materialize for the G.O.P.

As of Thursday afternoon, Ms. Cortez Masto was behind Adam Laxalt, a Republican former state attorney general, by fewer than 16,000 votes. But Democrats and independent analysts expected the remaining ballots that were yet to be counted to favor Ms. Cortez Masto.

The question was by how much.

By Thursday afternoon, election officials had counted 884,581 votes in Nevada. An estimated 100,000 ballots, cast through the mail and in drop boxes, have yet to be tallied. The tabulation process could stretch into next week, Nevada election authorities have said.

Mr. Laxalt is winning rural counties by large margins. But those areas are sparsely populated, and at least 95 percent of the ballots in most rural counties have already been counted.

That leaves Ms. Cortez Masto’s fate hinging largely on the mail-in ballots that are still dribbling in from the state’s two most populous areas: Clark County, a Democratic stronghold where she was winning by a little over 33,000 votes as of Thursday, and Washoe County, a swing area where she inched ahead on Wednesday night.

The bulk of the remaining ballots are from Clark County, which includes Las Vegas. At a news conference on Thursday, Joe Gloria, the registrar of Clark County, said that just over 50,000 ballots there remained to be processed, let alone counted, and he expected the “majority of the mail” to be tallied by Saturday.

Nevada allows votes that are postmarked on Election Day to be counted if they are received within four days. Election officials report mail votes in batches, which provide a real-time glimpse into how the two sides are doing. And the batches are trending in Democrats’ direction.

In a batch of 14,000 ballots released by Clark County on Wednesday night, Ms. Cortez Masto took 65 percent, versus 30 percent for Mr. Laxalt. In a set of 20,000 ballots from Washoe County released on Wednesday, her edge was slightly smaller: She won 61 percent, compared with 36 percent for Mr. Laxalt. At the same time, Mr. Laxalt is winning mail votes from rural counties by smaller margins than he won in-person votes from those areas.

If Ms. Cortez Masto wins the remaining mail votes by as little as 55 percent, her campaign expects, she is almost certain to overcome Mr. Laxalt’s expected advantages in the uncounted rural votes.

Mail ballots are not the whole story, however. Nobody can say with confidence how the drop box count will shake out. And if the race in Nevada comes down to a few hundred votes, how the state tallies other kinds of uncounted ballots could be decisive in either direction.

There are provisional ballots, which voters must cast if they are registering on Election Day or if they voted at the wrong precinct. And there are spoiled ballots, which require election officials to determine whether a voter intended to choose a certain candidate but filled out the ballot incorrectly. Nevada also allows voters to “cure” ballots until 5 p.m. on Monday, meaning that they can fix their mistakes to ensure their votes are counted.

White House officials declined to comment on the record on Thursday, though President Biden’s phone logs reflected his team’s disparate assessments of the two congressional chambers. He called Representative Kevin McCarthy, who most Democrats believe is likely to be the next House majority leader, on Wednesday, but not Mitch McConnell, the Senate minority leader.

Democrats are not only obsessively checking the results in Arizona and Nevada, but also monitoring for signs that Republicans plan to contest the outcomes.

In both Arizona and Nevada, some of the top Republican candidates in uncalled races have vociferously echoed former President Donald J. Trump’s false claims of a stolen 2020 contest and have cast broader doubt on the integrity of the election system.

When Mr. Laxalt was the co-chairman of Mr. Trump’s 2020 campaign in Nevada, he filed lawsuits aiming to overturn the results, falsely claiming they were “rigged.”

In Arizona, Mark Finchem, the Republican nominee for secretary of state, is already peppering his Twitter feed with similarly baseless claims. With 70 percent of the vote counted, Mr. Finchem is five points behind Adrian Fontes, the Democrat.

All eyes in the state are focused on the race for governor, which is significantly tighter than the Senate contest. Secretary of State Katie Hobbs, a Democrat, was narrowly leading Kari Lake, a Republican former television anchor who has amplified Mr. Trump’s false 2020 claims.

Ms. Lake has lacerated election officials as “imbeciles” after a hiccup with voting machines in Maricopa County. Stephen Richer, the county’s top election official, is a Republican who has been critical of Mr. Trump’s conspiracy theories.

Ms. Lake has also enlisted Harmeet Dhillon, a Republican Party lawyer who was a member of Mr. Trump’s legal team in 2020, to prepare for a possible legal and media battle over the results.

In an interview with Fox News in 2020, Ms. Dhillon said that Mr. Trump’s lawyers were “waiting for the United States Supreme Court, of which the president has nominated three justices, to step in and do something.”

“And hopefully Amy Coney Barrett will come through and pick it up,” she added.

Those hopes proved misplaced, as federal courts all over the country rejected almost every legal challenge the Trump team made.