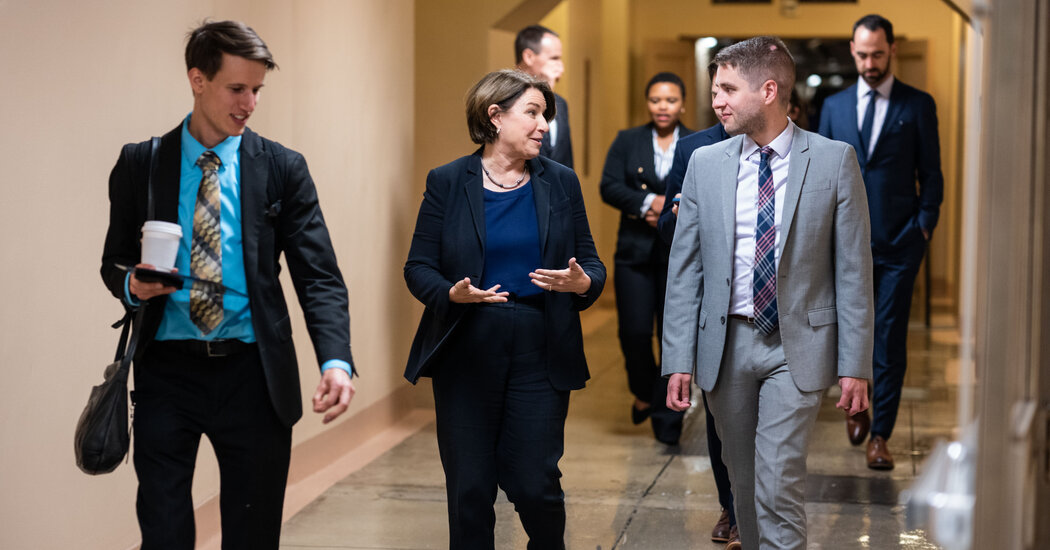 A group of 20 Democratic senators filed a brief on Wednesday urging the Supreme Court to reject a legal argument that would give state legislatures extraordinary power over federal elections.

The brief, filed by Senator Amy Klobuchar of Minnesota, draws parallels to the checks and balances of the federal government — especially Congress — as a clear indication that the so-called independent state legislature theory runs afoul of the Constitution.

Once considered a fringe argument found only in the far reaches of conservative legal thought, the independent state legislature theory is now at the center of a redistricting case in North Carolina before the Supreme Court. Set to be heard in December, that case, Moore v. Harper, involves a congressional map drawn by the Republican-led legislature that was rejected by the state’s Supreme Court as a partisan gerrymander. Republican lawmakers sued, arguing that the court had no authority to reject the map. The North Carolina Republicans have argued that the clause means state legislatures alone are responsible for drawing congressional districts, and the courts have no role to play.

Should the Supreme Court side with the North Carolina Republicans, it could give state legislatures across the country broad authority to write voting laws, draw district maps and set other electoral rules without being subject to review by state courts.

Affirmative action. The marquee cases of the new term are challenges to the race-conscious admissions programs at Harvard and the University of North Carolina. While the court has repeatedly upheld affirmative-action programs, a six-justice conservative supermajority may put more than 40 years of precedents at risk.

Discrimination against gay couples. The justices will hear an appeal from a web designer who objects to providing services for same-sex marriages in a case that pits claims of religious freedom against laws banning discrimination based on sexual orientation. The court last considered the issue in 2018 in a similar dispute, but failed to yield a definitive ruling.

Some legal scholars argue that it could also open up the possibility that a legislature could subvert the will of the people in a presidential election.

“The nightmare scenario is that a legislature, displeased with how an election official on the ground has interpreted her state’s election laws, would invoke the theory as a pretext to refuse to certify the results of a presidential election and instead select its own slate of electors,” the Brennan Center for Justice wrote this year.

Ms. Klobuchar said she and other senators filed the brief as part of a fight against continuing threats to democracy.

“What we’ve seen are state legislative efforts that threaten our democratic processes, and really limit opportunities for people to vote,” she said in a brief interview. “This is so critical to, with my colleagues, urge the Supreme Court to ensure that state legislatures remain bound by checks and balances in their state constitutions such as judicial review.”

She added that her staff had reached out to a few Republican colleagues on the issue of the independent state legislature theory, but none wanted to take action, so the brief was drawn with just Democratic support.

“Allowing state legislatures to act independently of these ordinary checks and balances would not only undermine the structure of the Elections Clause and Article I as a whole, it would also run contrary to the Constitution’s guarantee of a ‘republican form of government,’” the senators wrote.

The brief also notes that state legislatures derive their power from state constitutions, and therefore must be beholden to the rules set forth by the state’s founding documents.