Democrats scramble into defensive posture in final stage of midterms 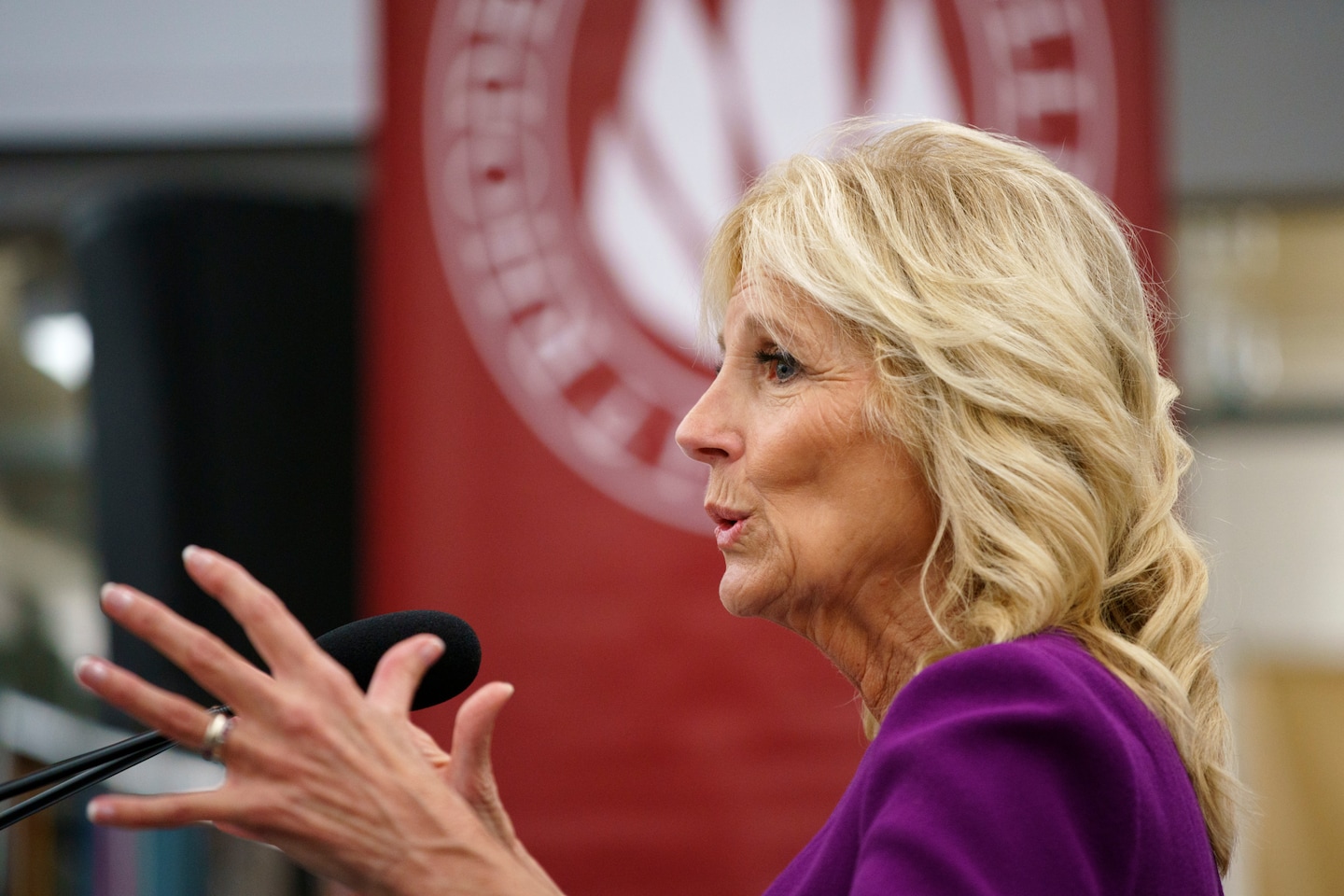 Democrats on Wednesday pumped at least $6.3 million worth of advertising investments into a trio of congressional districts in New York and New Jersey, where President Biden won by at least eight percentage points.

First lady Jill Biden spent the afternoon in Rhode Island trying to help save a Democrat running in a district her husband carried by nearly 14 points. The president is headed to the deep-blue Empire State on Thursday, where the Democratic governor is scrambling to avoid an upset in a closer-than-expected race that has put Democrats down the ballot in greater danger.

And in Pennsylvania, Democrats were trying to move past a shaky Tuesday debate performance by John Fetterman, who is recovering from a stroke. One former party official relayed hearing from people who wondered why Fetterman agreed to debate during his recovery. The U.S. Senate nominee’s once comfortable polling lead has shrunk in a race that party leaders have long seen as their best opportunity to flip a red Senate seat and take a step closer to preserving their narrow majority in the chamber.

Less than two weeks before the midterm elections, Democrats have moved into a defensive crouch, scrambling to shore up the party’s candidates as Republicans charge deeper into their terrain. The scope of their challenge has come into sharper focus in the past 48 hours, when much of the attention in the party has been on protecting swaths of the country where Democrats have long enjoyed more support.

Late-summer Democratic talk of going on offense by running on abortion rights while Biden’s approval rating ticked up has run headlong into the harsh reality that Republicans are well-positioned to make potentially large gains on Nov. 8, some Democratic strategists said, by hammering them over crime and inflation — and seizing on fatigue over Democratic leadership in government.

“Some of what is going on is a reversion to the norm. After all the sound and fury, elections go back to their basics,” said Craig Varoga, a Democratic strategist who has worked on presidential, gubernatorial and Senate races.

Like other Democratic strategists, Varoga said he worried his party put too much emphasis on abortion over the summer and should have more aggressively made it part of a broader argument that Republicans oppose personal freedom. “Politics is hard work. It’s like personal wellness — you can’t rely on one thing to fix everything,” he said.

Multiple Democratic strategists said that fear of losing the right to abortion is proving to be a less motivating factor in blue states because voters believe their access to the procedure will be protected by current laws and Democratic control of state government.

That has been compounded by other factors, some said. One Democratic strategist, who spoke on the condition of anonymity to be more candid, described a “blue-state depression” for House races, pointing specifically to New York, Oregon and California where a handful of races are “closer than normal.”

The new spending came in the wake of the Congressional Leadership Fund, the main GOP House outside group, announcing that it had poured $11 million into new or expanded ad buys in 16 congressional districts. Biden won seven of them in 2020 by double digits, the group noted. Among them was Rhode Island’s 2nd Congressional District, where Jill Biden campaigned for Democrat Seth Magaziner, the state treasurer and party nominee for the House seat.

“I think they’re flailing. They’ve never really had a plan. It seems like they don’t have any focus,” said the National Republican Congressional Committee’s chairman, Rep. Tom Emmer (R-Minn.), speaking of Democrats. “As we look across the country, we just have a ton of opportunities.”

Some Democrats pointed to fatigue in blue areas over pandemic restrictions, one-party dominance, and concerns about violent crime and quality of life in large cities such as Portland, Ore., New York City and San Francisco.

“Crime, in many ways, is the thread that is holding those together,” said Dan Sena, a former executive director of the Democratic Congressional Campaign Committee.

In New York, Biden will appear Thursday with Democratic Gov. Kathy Hochul, who is struggling to fend off attacks from Rep. Lee Zeldin, the GOP nominee. Hochul is favored to win, but Zeldin’s focus on rising crime in the state is making the race far more competitive than most expected.

Zeldin opened a Tuesday debate with a plea for a more urgent response to crime, saying Hochul should call a special session of the legislature to address the problem. Concern about crime is a potent issue in New York and is contributing to a tighter-than-expected gubernatorial race as well as tightening House races.

Democratic strategists in the state say as many as four Democratic-held seats could slip away — including one held by the DCCC’s chairman, Rep. Sean Patrick Maloney. Republicans need to net just five House seats to take back the majority.

Republicans have spent about $5 million pummeling Maloney in his district, according to data from AdImpact, pouring in a significant investment. Earlier in the summer, top Democrats privately waved off concerns about their campaign chief losing his own election, but that confidence has waned.

The DCCC recently spent about $600,000 in an effort to save his seat — a sign that Democrats are taking the threats seriously.

“All of these races in New York are too close for comfort for Democrats,” former congressman and DCCC chairman Steve Israel said.

Israel voiced a belief that moderate voters are not motivated by social issues. “The judgment that pro-choice independent voters are making in blue states is that Dobbs will not impact them because they live in blue states,” he said, referring to the Supreme Court ruling that ended the constitutional right to an abortion.

In some parts of the country with a redder hue, Democrats appeared less worried. Rep. Sharice Davids, who represents a Kansas district that Biden won by just four points, is less of a concern, some said. That’s true as well for Rep. Jared Golden in Maine’s 2nd Congressional District, which Donald Trump won by seven percentage points.

Democratic candidates have sought to keep up an optimistic tone. “What I’m feeling is exactly what we were feeling heading into our August special election, where every expert and pundit said we were not going to win,” said Rep. Pat Ryan (D-N.Y.), who won running heavily on abortion rights and is now in the newly drawn 18th Congressional District.

“We won [in August] because we stood for freedom and democracy and choice,” Ryan said in an interview with The Washington Post. “That same message is absolutely resonating even more loudly.”

In Pennsylvania on Wednesday, some Democrats were less upbeat, hoping to turn the page from the only debate between Fetterman and Republican Mehmet Oz. The two clashed on Tuesday over policy issues in an hour-long showdown in which Fetterman often stumbled over his words and struggled with the rapid-fire format of questions and answers.

“It was going to be difficult for him in any situation,” said Larry Ceisler, a Democratic public affairs executive in Philadelphia. “He was like a boxer who could not defend himself against a smooth ring veteran. It was an unfair fight.”

Fetterman’s campaign announced in a statement Wednesday that it raised $2 million in less than 24 hours after his debate, which it attributed “to the deep grassroots enthusiasm.”

The campaign also attacked Oz for saying about abortion in the debate, “I don’t want the federal government involved with that at all. I want women, doctors, local political leaders leading the democracy that’s always allowed our nation to thrive to put the best ideas forward so states can decide for themselves.” A new ad singles out the “local political leaders” part of his comment.

T.J. Rooney, former chairman of the Pennsylvania Democratic Party, said he heard from people who were aghast that Fetterman’s team agreed to a debate, given the candidate’s health. Fetterman and his doctors have said he has shown symptoms of an auditory processing disorder, and the candidate has been open about the fact that he sometimes struggles with his words after his May stroke. He relied on closed-captioning in Tuesday’s debate. Fetterman’s doctors have said he is fit to serve in the Senate.

“There were people with a passing interest in politics who watched this debate and reached out and said, ‘I feel for the guy,’ ” Rooney said. “The overarching theme was a feeling of sadness, and I don’t know how that translates in politics. It used to be the death knell. Now people are more tolerant.”

Democratic concerns about the Senate, where Republicans need to net just one pickup to win control of the chamber, extend beyond Pennsylvania.

The National Republican Senatorial Committee announced an ad buy of about $1 million this week to boost Senate nominee Don Bolduc in New Hampshire and said the group’s chair, Sen. Rick Scott (R-Fla.), will appear at a rally for Bolduc this weekend — both developments showing potentially renewed confidence after another Republican group withdrew from the race.

Some Democrats said the individual moves by Republicans don’t add up to much. “There may be so-called signs, but there are not trends,” said J.B. Poersch, the president of Senate Majority PAC, the main outside group supporting Senate Democrats.

Republicans have gained more confidence about Wisconsin, where Sen. Ron Johnson has opened up a lead in the polls after being in close competition with his Democratic challenger, Lt. Gov. Mandela Barnes, during the summer. And both parties acknowledge competitive races in Nevada and Georgia, where Republicans are trying to flip seats, as well as Arizona, another GOP pickup opportunity.

Some governor’s races have also caught the attention of Republicans, including in blue-leaning Oregon. A three-way race is raising the possibility that Democrats will lose there for the first time in four decades — which is hurting U.S. House candidates, Democratic strategists said. Republicans have sought to capitalize on the unpopularity of outgoing Democratic Gov. Kate Brown, with some in tight races putting her image in ads they’re running in the state.