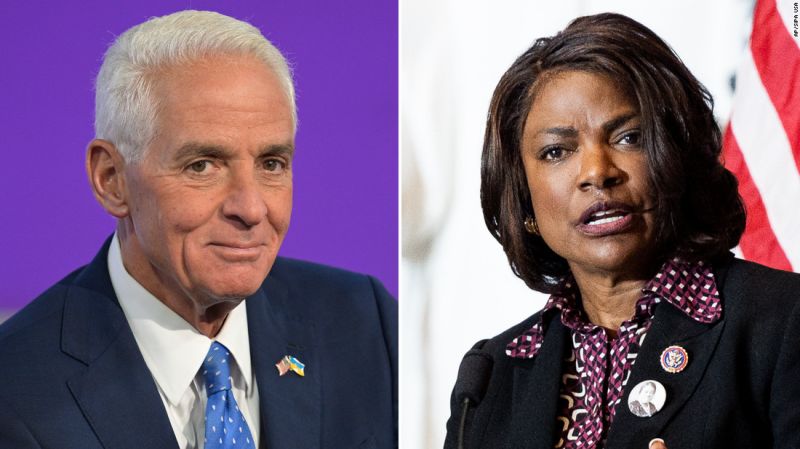 That’s the sentiment rolling through Democratic circles in Florida after President Joe Biden’s tour of the state’s storm-ravaged Gulf Coast, where he praised Republican Gov. Ron DeSantis, Crist’s opponent, for his handling of Hurricane Ian. Biden called DeSantis’ response “pretty remarkable” after a congenial joint event with his sometime nemesis.

Hurricane Ian’s arrival a month before the election has pushed politics to the back burner as state and local leaders continue to deal with the fallout of the deadliest storm to hit Florida in generations. It has been a challenge for Democratic candidates to turn the attention back to the campaign trail with so much focus on the recovery and so many residents in southwest Florida homeless.

At the time of Biden’s remarks, Crist, the Democratic nominee for governor, and his allies were ramping up criticism of DeSantis tied to the hurricane – highlighting the former GOP congressman’s past votes against storm aid and climate change legislation and raising questions about the timing of evacuations in Lee County and the lack of urgency to address a crumbling property insurance market. Earlier in the week, Crist and the state Democratic Party promoted a story from a local television station featuring Floridians who said they were blocked from delivering storm supplies so DeSantis could survey the damage.

Biden “closed the door to that,” one veteran Democratic strategist told CNN, asking not to be named to speak openly about the race.

“The dynamics of the race needed to shift, and this was an opportunity for it to shift,” the strategist said. “The President complimenting the governor takes that whole issue off the table.”

Democrats were already facing an uphill climb in a state trending red prior to Ian making landfall. The Republican voter registration edge in Florida, a recent phenomenon, grew to 270,000 in September, according to the state’s Division of Elections. A recent survey of likely voters conducted by Siena College before the storm gave DeSantis an 8-point advantage over Crist. And DeSantis still hasn’t fully unleashed his colossal fundraising advantage – $106 million on hand to Crist’s $5 million at the end of last month.

In the race for US Senate, Republican Sen. Marco Rubio similarly led Rep. Val Demings, an Orlando Democrat, by 7 points in the Siena poll. And Rubio, though outraised for most of this cycle, has nearly twice as much cash for the closing weeks as Demings, who spent aggressively over the summer to introduce herself to voters unfamiliar with her background as a former Orlando police chief and three-term congresswoman.

Just as Floridians live under constant threat of hurricanes this time of year, campaigns here, too, are often forced to navigate the politics of storms. The disruption Ian has caused to the electoral calendar, while not remotely a concern for those bearing personal loss from the destruction, nevertheless remains a delicate test for candidates.

Demings has reengaged with the campaign by focusing on Rubio’s past votes related to disaster relief. On Thursday, Demings told MSNBC that Rubio “should pay a price” for skipping a vote on a stopgap bill to fund the government through the end of the year that included $18.8 million for the Federal Emergency Management Agency to assist states, including Florida, with natural disasters.

“If there’s any time we should lay politics aside, it dag gone should be during a natural disaster,” she said.

Rubio’s campaign accused Demings of supporting a Hurricane Ian relief bill full of “pork” for projects unrelated to the storm. The senator has said he would vote against such a bill.

“We shouldn’t have that in there because it undermines the ability to come back and do this in the future,” Rubio said.

As Ian arrived, Crist pulled his ads off the air in most of the state’s media markets. This week, he redirected his campaign bus to assist with the relief efforts. The only scheduled debate between Crist and DeSantis, slated for next week, is now delayed, and the host station has not announced a new date.

Meanwhile, DeSantis, who continued to air campaign commercials throughout the storm, has commanded Florida’s response from ground zero, holding regular briefings in which he updates reporters on the state’s recovery efforts. In recent days, these news conferences have been joined by supporters of the governor, who cheer him on as he announces new developments in the push to get Lee and Charlotte counties up and running.

At DeSantis’ joint appearance with Biden in Fort Myers Beach on Wednesday, absent was the Republican’s aggressively partisan approach to governing that has fueled his fast rise to 2024 presidential hopeful. Instead, he commended the White House for its collaboration in helping Floridians, while Biden returned the favor, telling reporters that DeSantis has done “a good job” managing the recovery.

“We have very different political philosophies, but we worked hand in glove,” Biden said. “On things related to dealing with this crisis, we’ve been completely lockstep. There’s been no difference.”

Democrats expected Biden and DeSantis to play nice during their brief time together, but the compliments the President offered the governor caught some by surprise.

Sean Shaw, a former state representative who remains active with the state party, said his phone was full of text messages from Democrats noting how bad Biden’s remarks would be for Crist.

“But I mean, what else is Biden gonna say?” Shaw said in a text message to CNN.

Crist has seen his political fortunes upended by presidential visits before. As a Republican governor in 2009, Crist drew criticism from his party for hugging President Barack Obama at a Florida event to sell the White House’s financial recovery plan. The fallout from that moment kickstarted Crist’s eventual exit from the GOP.

Now, as the Democratic candidate for governor, Crist has emphasized his hug with Obama to engage with Black voters and he has embraced Biden like few in his party have. The day after winning the Democratic primary for governor of Florida, Crist called Biden a “great man” and “the best I’ve ever met” and he welcomed the President to join him on the campaign trail.

“Thank god for Joe Biden,” Crist said in the interview. It’s a line featured – twice – in a Republican ad airing against Crist.

Reggie Cardozo, who previously served as Obama’s political director in Florida, said he believes there is still an opportunity for Crist to make a case against DeSantis despite Biden’s remarks.

“The White House wanted this to be as apolitical as possible. So I’m not surprised that there was a kumbaya moment. As it should be,” Cardozo said. “Crist can credit the governor for doing his best to make sure the recovery is going smoothly while making sure people don’t forget this is a man who voted against this and believes that.”

Democrats would also like to shift the conversation back to issues on which they believe they have the upper hand, including the future of abortion access in the state and the soaring cost of living in Florida. In an appearance Thursday night on MSNBC, Crist attempted to link DeSantis’ about-face on hurricane aid to the Republican push to restriction abortion.

“It sure would be nice to be kind of consistent about what you believe versus what you think is an emergency situation,” Crist said. “He just seems to be inconsistent on so many things. He talks about freedom, for example. Yet he wants to attack a woman’s right to choose. I mean, it’s consistent all the way.”