Dixieland Band performs at ‘Tuesdays in the Park’ 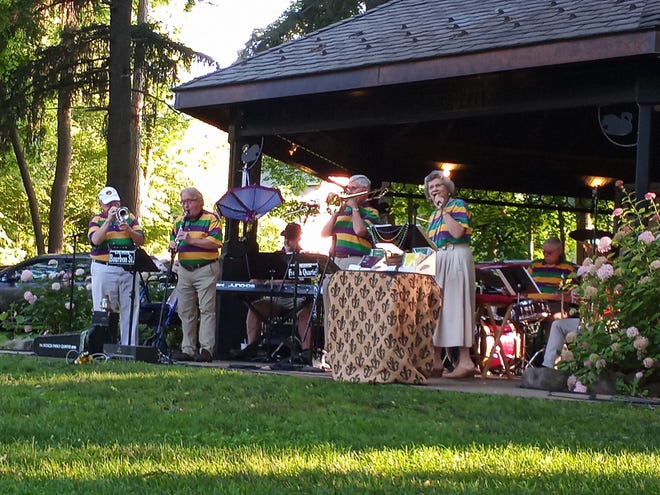 According to leader Phil Bickel, the band has been playing for 38 years in and around Hillsdale County. For the last two years, Bickel has been a resident of Hillsdale.

“When I moved down here from Jackson,” Bickel shared, “I knew I was going south so I thought ‘Hey, good, the winters will be a lot warmer!’ Haven’t noticed it. But it’s a great area and a delight to be here!”

The band played a collection of music that kept the audience moving to the beat, including songs like “Bourbon Street Parade,” “Basin Street Blues,” and “Yes! We Have No Bananas” – wherein the coronet player, Bill Jenson, tossed actual bananas to a few laughing audience members.

Starting at 7:30 p.m., the performance ended roughly an hour later with “When the Saints Go Marching In,” audience members’ favorite song as they clapped and stood to applaud the band.

Melinda Long, the Dixieland Band’s vocalist, shared her thoughts after the performance saying, “We had a great audience. When they’re responding, clapping their hands, tapping their feet, that’s a good indication that we’re doing what we’re supposed to be doing.”