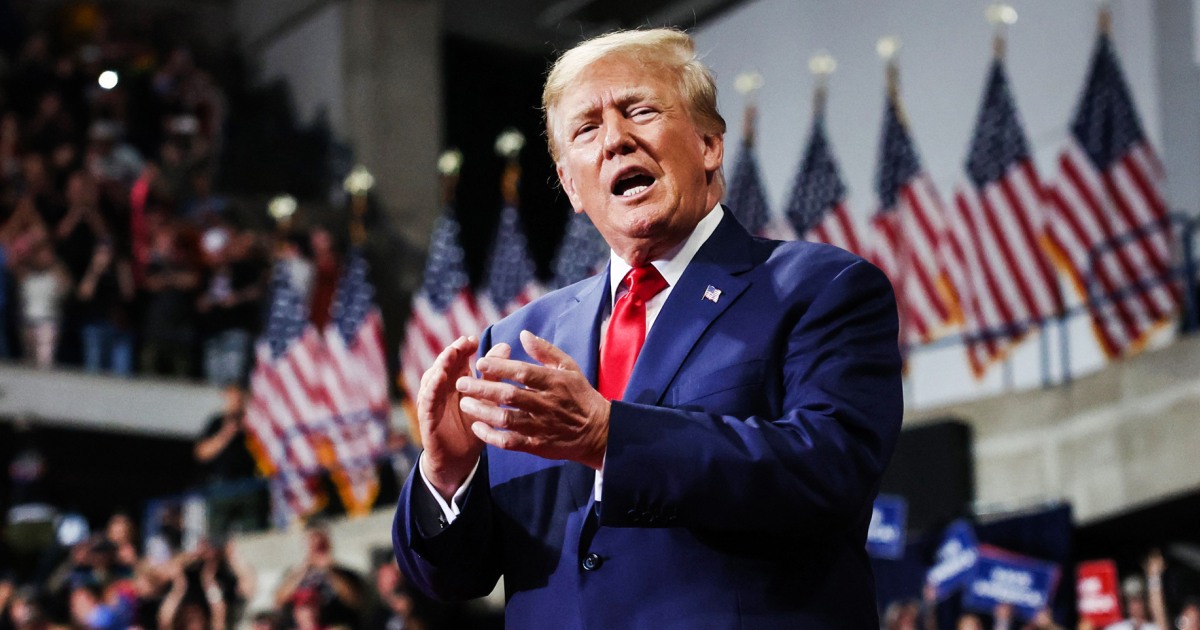 WASHINGTON — The hundreds of pages of classified government records seized from Donald Trump’s Mar-a-Lago estate last month aren’t the former president’s “personal records,” and he has no right to possess them, the Justice Department said in a court filing Thursday as it said the government would appeal a judge’s ruling on the matter.

The Justice Department will appeal U.S. District Judge Aileen Cannon’s ruling for a special master to look at the documents seized during the search of Trump’s Mar-a-Lago home, according to the notification filed Thursday. The Justice Department said it will file its appeal to the United States Court of Appeals for the 11th Circuit.

The department also asked for a partial stay of Cannon’s ruling while the appeal is pending, saying that “the government and the public are irreparably injured when a criminal investigation of matters involving risks to national security is enjoined.”

Cannon gave Trump until 10 a.m. ET Monday to respond to DOJ’s motion for a partial stay of her order granting the special master request.

“The classified records are government property over which the Executive Branch has control and in which Plaintiff has no cognizable property interest,” the Justice Department wrote.

Cannon, a 41-year-old Trump appointee who was confirmed to the Southern District of Florida at the tail-end of the Trump administration, granted Trump’s request for a special master Monday. Her ruling was widely panned by the legal community, especially given her unprecedented decision to give a special master authority not only over documents protected by attorney-client privilege but over Trump’s purported claims of executive privilege.

The Justice Department said there was absolutely no question that the classified documents the FBI recovered from Mar-a-Lago belonged to the U.S. government.

“The classification markings establish on the face of the documents that they are government records, not Plaintiff’s personal records,” the government wrote. “The government’s review of those records does not raise any plausible attorney-client privilege claims because such classified records do not contain communications between Plaintiff and his private attorneys. And for several reasons, no potential assertion of executive privilege could justify restricting the Executive Branch’s review and use of the classified records at issue here.”

Trump “does not and could not assert that he owns or has any possessory interest in classified records; that he has any right to have those government records returned to him; or that he can advance any plausible claims of attorney-client privilege as to such records that would bar the government from reviewing or using them,” DOJ wrote.

When the FBI executed a search warrant at Mar-a-Lago one month ago, the Justice Department says it found more than 11,000 pages of government documents that — under the Presidential Records Act — belonged in the custody of the National Archives. They also found hundreds of pages on documents with classified markings, despite the fact that a Trump lawyer attested that the former president no longer possessed classified records after turning over 38 classified documents in June in response to a grand jury subpoena. Earlier in the year, Trump turned over boxes of documents to the National Archives that contained more than 700 pages of classified records.

The government argued that there was evidence that the Trump team “concealed and removed” additional classified documents that had been stored at Mar-a-Lago before the FBI’s August search took place.

A federal magistrate judge found probable cause that evidence of crimes would be found at Trump’s Mar-a-Lago estate and signed off on the FBI’s warrant to search the property. In fact, the FBI found more than 100 classified records that Trump was not supposed to have, DOJ said in a court filing last week, along with the more than 11,000 government documents that properly belonged in the National Archives.

There’s nothing in the law that would suggest “that a former President can successfully assert executive privilege to prevent the Executive Branch itself from reviewing and using its own records,” the Justice Department wrote Thursday.

“A stay would simply allow the government to continue to review and use the same records — which, again, indisputably belong to the government, not Plaintiff — in its ongoing criminal investigation as well,” the department added.

Ryan J. Reilly is a justice reporter for NBC News.