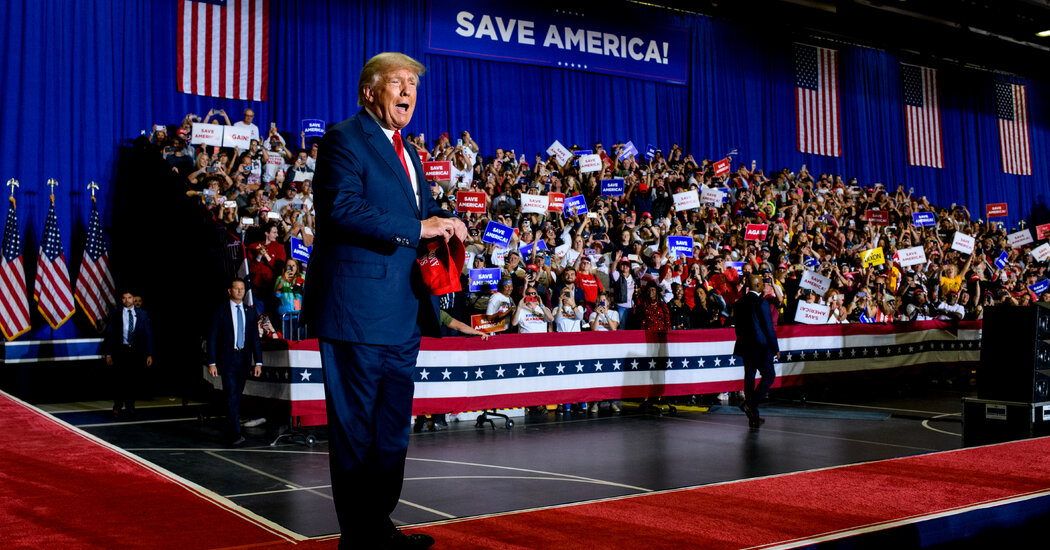 Donald Trump is the leading candidate to be the Republican nominee for president — for the third straight election — and he’s also a subject of multiple criminal investigations. My colleague Maggie Haberman has been covering him the entire time and has written a book about him, “Confidence Man,” being published tomorrow. She often broke stories in The Times that she uncovered while reporting for the book.

For today’s newsletter, I spoke with Maggie about what she’s learned, about how much the media should cover Trump and about what’s likely next for him.

David: You’ve spent more time covering and interviewing Trump than almost anybody, back to your days observing him when you were a New York Post reporter in the 1990s. You’ve also pointed out that he lies a lot. Given that, I’m curious: How does interviewing him help you better capture reality when he is not confined by reality?

Maggie: He’s a former president and a potential future candidate, with huge influence over the party. Among other things, interviewing him helps illuminate how he keeps that influence: his obsession with us-versus-them politics, with salesmanship and with presenting a version of himself that is often very different from who he actually is.

Additionally, there are moments of unintended candor by him.

David: Yes, like his comments to you about the letters from Kim Jong-un that Trump apparently kept after leaving the White House.That’s gotten a lot of attention recently. (You can listen to the clip below.)

Maggie: It was a question I asked on a lark, during our third interview for my book, held at his club at Bedminster, N.J., on Sept. 16, 2021. I asked him if he had taken any “memento” documents from the White House, knowing how proud he had been of items like his letters from the authoritarian Kim Jong-un.

Trump’s immediate response was to deny having taken anything significant, saying, “Nothing of great urgency, no,” before — unsolicited — mentioning the Kim Jong-un letters, appearing to suggest he had them in his possession. A few months later, we learned he had a huge trove of White House material, including dozens of individual documents with classified markings.

David: As I listened to the clip, it felt like part of a pattern with him. He was certainly not being straightforward. But he was also being just vague and confusing enough that it was hard to pin down exactly what he was saying. As the journalist Joe Klein has written, referring to this larger pattern, “He deployed words with a litigator’s precision — even if it sounded the opposite.”

Maggie: That’s exactly it, and one of the difficulties of interviewing him, or tracking what he says, is he is often both all over the place and yet somewhat careful not to cross certain lines. This was a hallmark of his business career, when he would tell employees not to take notes, although behind closed doors with employees he tended to be clearer in his directives.

At his rally at the Ellipse on Jan. 6, he told people to go “peacefully and patriotically” but also directed them to the Capitol with apocalyptic language about the election. Frequently, people around him understand the implications of words, even when he’s not being direct.

David: Our readers can also listen to a clip of him telling you that he wasn’t watching the Jan. 6 rally on television. Isn’t there widespread documentation to the contrary?

Maggie: His aides told The Times that day and in the following days that he was watching television, and a public hearing held this year by the House committee investigating Jan. 6 documented that he was watching television. It represents two things, I think — his desire to construct an alternate reality, and his particular sensitivity to anyone suggesting he watches a lot of television, which he associates with people diminishing his intelligence (even though he watches a very large amount of television).

David: How do you approach an interview with Trump?

Maggie: I try to get specific pieces of information, answers that only he would have, even with all the caveats about what can be believed coming out of his mouth. One example was when I asked if he would be facing the same legal troubles if Robert Morgenthau, the former Manhattan district attorney, still held the office. His answer was no, because Morgenthau was “a friend of mine.” That was revealing about Trump’s engagement with prosecutors, as he has escaped one investigation after another over years.

Maggie: I think the criticism about too much coverage of Donald Trump felt very real to his primary opponents in 2016, and often to the Clinton campaign. But I would argue that he was leading the polls in the primaries and that the coverage was often not what one would call flattering.

What I think is a significant criticism deals with the decades before, when he built this image of himself, with each news story serving as a brick in the artifice, as a self-made business tycoon. He definitely had successes, but he was reliant on his father in ways the public didn’t see and, thanks in part to the Times reporting on his tax returns, learned about years later. That’s something the industry needs to reckon with.

Now, he’s a former president with a huge following, as he undermines faith in elections and embraces conspiracy theories. I’m not sure there’s a good argument for ignoring him, because he still gets heard through other means. There is a good argument for contextualizing him.

David: What happens next? Does he want to be president again or just get revenge on Biden? And what do you think motivates him?

Maggie: I think Trump misses the pomp and legal protections that the presidency afforded him. I also think he wants revenge on Biden, and on the media, and on a whole range of people. And he wants to be able to continue to raise money and get attention, both of which disappear if he doesn’t run. What I’m not clear on is that he really wants to wage another campaign, in part because he’s that much older and in part because he seems less engaged generally. But that will reveal itself in the coming weeks or months.

SPORTS NEWS FROM THE ATHLETIC

A statement win: Kansas City earned one of the best victories of the young N.F.L. season in Tampa Bay, 41-31. It was a key data point in an illuminating weekend of football.

Four games left: Aaron Judge and the Yankees close out the regular season in Texas this week, with Judge one home run shy of the A.L. single-season record. The series runs today through Wednesday with a doubleheader on Tuesday.

You may have seen people smearing butter across different surfaces and posting them across social media platforms lately — all in the name of the butter board.

The instructions for creating a butter board are straightforward: Grab a cutting board. Slab a lot of soft butter on it. Then customize it, with ingredients like honey, lemon zest, edible flowers, chile flakes, figs or radishes (as you can see in these photos). “It’s simple, it’s fun, it’s artistic,” said one woodworker, whose board sales on Etsy have surged.