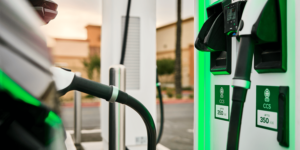 According to Volkswagen and Siemens, the capital injection brings Electrify America’s post-money valuation to $2.45 billion (€2.31 billion). The announcement did not disclose Siemens’ future stake in Electrify America. Siemens Financial Services (SFS) said it was a “low triple-digit million investment,” giving Siemens a minority stake and a seat on the Board of Directors. The remainder of the $450Mn (€425Mn) comes from VW.

The investment is also part of a “strategic partnership.” On the one hand, the capital is to help Electrify America implement its growth plans more quickly and “achieve technological advances in charging and energy solutions for public, private and commercial offerings.” Second, Siemens’ investment reaffirms the company’s commitment to future collaboration between Siemens and Electrify America on technologies and services to drive the expansion of high-quality, reliable charging solutions, VW said. As a full-service provider of eMobility charging infrastructure, Siemens eMobility offers the full range of AC and DC charging hardware, software and services – from residential to commercial to depot applications. The company has also recently expanded its US operations with plans to make one million EV chargers in America by 2025.

Siemens has become the first external investor in Electrify America and an “important strategic technology partner,” according to Volkswagen. Reports that VW was seeking co-investors for its North American HPC network surfaced a year ago. Although the exact amount of Siemens’ investment is unknown, it is significantly less than what Reuters had indicated in the report in July 2021. At that time, there was talk of around one billion dollars.

According to Thomas Schmall, VW group board member for technology and CEO of Volkswagen Group Components, the group intends to use the $450 million, which will come in part from its funds, to “give e-mobility in North America a further boost” and “grow consistently” in the charging and energy business segment. “The plan is to more than double Electrify America’s charging infrastructure to 1,800 locations and 10,000 fast chargers by 2026,” Schmall says. “Siemens’ investment confirms our electrification strategy of making charging and energy solutions available nationwide – to customers of all EVs. ”

For SFS, it is one of the most significant investments in e-mobility. “Our unique ability to combine financial and technology know-how helps to fulfil Siemens’ commitment to decarbonize key industries, accelerate the shift to sustainable mobility, and do so in a way that’s accessible for all,” said Veronika Bienert, CEO of Siemens Financial Services.

Volkswagen established Electrify America in 2017 following court rulings in the US that had found the company guilty of cheating on emission tests of their diesel vehicles. VW was ordered to spend two billion dollars over ten years to install 2,000 charge points at 500 locations. At present, Electrify America says it has already installed 800 hubs hosting 3,500 ultra-fast chargers. Initially a form of redemption, the network is proving a commercial success for the carmaker’s subsidiary, which has massively increased the coverage of HPC sites. In 2021, Electrify America recorded 1.45 million EV charging sessions, over five times more than the previous year with over 268,000 EV charges.

In its NEW AUTO strategy, globally, Volkswagen targets installing around 45,000 high power charge points across Europe, China, and the USA with partners.