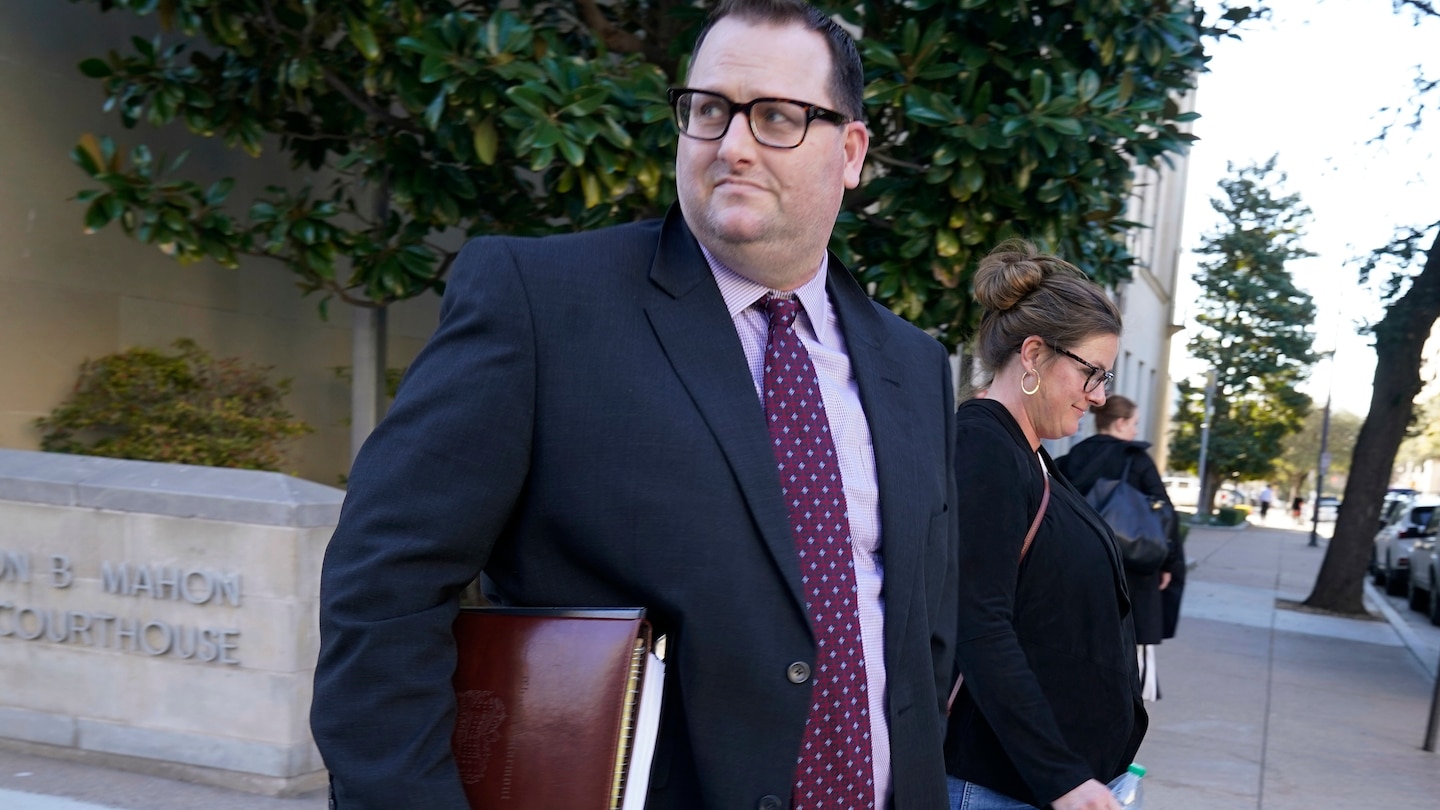 FORT WORTH — Eric Kay, the former communications director for the Los Angeles Angels, was sentenced Tuesday to 22 years in prison after being convicted in February of providing the drugs that caused the 2019 death of pitcher Tyler Skaggs.

District Judge Terry Means said he went above the minimum 20 years Kay faced because of remarks he made in prison.

Prosecutors played a tape of a prison phone conversation in which Kay, whose calls were monitored and recorded, said of Skaggs: “I hope people realize what a piece of s— he is. … Well, he’s dead, so f— him.”

Means said he that he had been dreading sentencing Kay, 48, who was convicted of drug distribution resulting in death, because he felt mandatory minimums were “excessive.” But the judge said that the prison conversations showed a “refusal to accept responsibility and even be remorseful for something you caused.”

In his own remarks, Kay apologized for having “spewed vitriol” about Skaggs, prosecutors and the jury, in that and other prison correspondence.

“I wanted to blame Tyler for all of this,” Kay said, calling his words “so wrong and foul.”

The emotional sentencing hearing spelled a bleak end to this phase of a legal saga that began when Skaggs, 27, was found dead in a Southlake, Tex., hotel room July 1, 2019, with oxycodone and fentanyl in his system. Kay has indicated he will appeal his conviction.

Kay was, like Skaggs, a user of illicit opioids. During Kay’s trial in February, witnesses including several Major League Baseball players said he shared black market pain pills with them, though the government has not suggested that he did so for profit.

Federal prosecutor Erinn Martin stated that Kay was in Skaggs’s hotel room when he choked on his own vomit — a contention based on key card evidence — and that he didn’t try to save the pitcher either because “he freaked out and decided to save himself and his job,” or because he was incapacitated himself.

Martin said Tuesday that Kay knew that the drugs he gave Skaggs were “likely or potentially counterfeit” and could contain fentanyl.

Kay, who did not take the stand in his own defense during the trial, did not directly address the government’s version of events Tuesday but expressed remorse for his actions, blaming his addiction.

“I will spend the rest of my days in repair,” said Kay, who wore an orange jumpsuit and was in arm and leg shackles, during remarks in which he sometimes sobbed.

Skaggs’s family members said Kay was responsible for the pitcher’s death in their own remarks in court Tuesday.

“Eric Kay knew that the drugs he was giving to my son and other players [were] laced with fentanyl,” said Skaggs’s mother, Debbie, adding that “a strict sentence … has the power to dissuade people from providing lethal drugs to others.”

“I feel strongly that those who risk the lives of others with killer drugs need to be held accountable,” Skaggs’s widow, Carli, said. “If anything good can come of Tyler’s death and this trial, it will be preventing someone else’s wife from receiving the call I did.”

“I know no matter how much time Eric Kay gets it won’t bring back Tyler,” Skaggs’s father Darrell said in a statement read in court by Tyler’s aunt. “But the longer he is incarcerated, the safer everyone is.”

Kay, who was raised upper-middle class in Southern California and educated at Pepperdine University before rising to earn a six-figure salary with the Angels, had no previous criminal record. But Martin, the prosecutor, said that Kay’s prison correspondence was evidence that he hadn’t learned his lesson.

In emails and phone calls, Kay referred to the “trash-ass Skaggs family,” derided the jurors as “rednecks” with missing teeth, and referred to a federal prosecutor’s “horrible makeup.” Martin also noted that Kay was allegedly caught with suboxone while in jail.

Kay’s attorney, Cody Cofer, said that his client’s jailhouse remarks reflected the resentment of a man coming to terms with being separated from his family for two decades. “The notion that he is likely to reoffend is just not supported,” Cofer said.

Means said that Kay should be incarcerated near his home of California, where he has three sons, the youngest of whom is 12. Kay’s middle child, 20-year-old Carter, said during the sentencing hearing that his father “wouldn’t do something bad willingly,” and urged the judge to be lenient.

“My little brother needs him most,” Carter Kay said. “I haven’t seen him smile in a while.”

Skaggs’s family has filed suit against Kay and the Angels, claiming that the team “knew or should have known” that Kay was a drug user, and that placing him in proximity to athletes playing through injuries created a “perfect storm” leading to the pitcher’s death.

The family is represented by Texas attorney Rusty Hardin. “Today’s sentencing isn’t about the number of years the defendant received,” a spokesperson for the family said following the ruling. “The real issue in this case is holding accountable the people who are distributing the deadly drug fentanyl.”

The Angels have denied the allegations in the family’s lawsuit. An Angels spokesperson said in a statement Tuesday afternoon that “our compassion goes out to the Skaggs family on this difficult day.”

Since Kay’s trial, one of his attorneys, Reagan Wynn, has been suspended from practicing law after a Texas bar panel found he “failed to explain” to another client the facts of his criminal case. In a May hearing in Kay’s case, his other attorney at the time, Michael Molfetta, appeared to blame Wynn for having left Kay without representation during a meeting with probation officials before his sentencing.

“I was always a part of a group email with probation, and I wrongfully — and it is on me — just assumed Reagan was handling it,” Molfetta told a judge. “I would text Mr. Wynn and say, ‘Hey, you got this?’ And throughout the course of our representation, he apparently doesn’t like texts, because he never really got back to me.”

Molfetta has also since left the case. In an interview with The Washington Post, Sandy Kay said that her son had received a poor legal defense.

“Tyler Skaggs was an adult male who willfully chose to engage in dangerous behavior that ended in his death,” Sandra Kay said. “And to hold someone else accountable for that is a great injustice.”