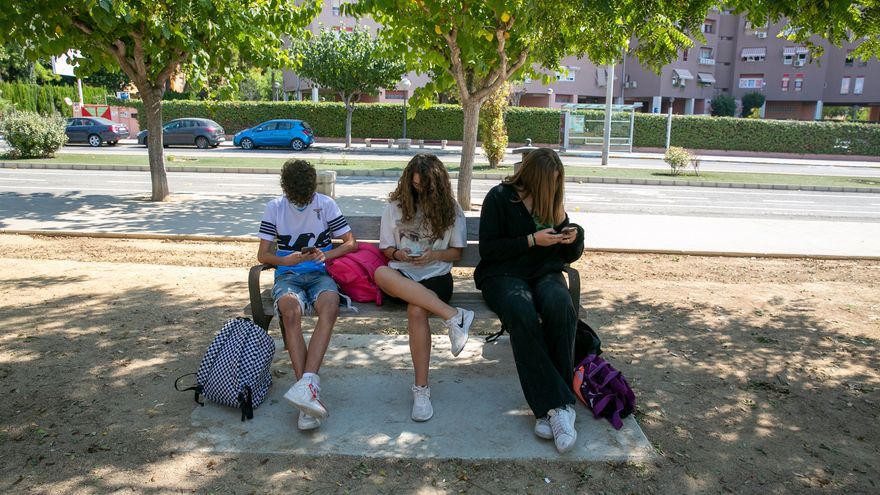 Minor and new technologies are almost the same. According to the National Observatory of Technology and Society, 98% of children aged 10 to 15 use the Internet regularly. Seven out of ten minors have their own mobile phone. The pandemic also accelerated the implementation of technical measures that affected the educational system and minors, families and teaching staff, such as virtual classes. so much that Now deep concern about addictions among experts For mobile among minors.

It is the summer season and many families living in the city come to spend the summer months in the city. There, the kids meet summer friends whom they don’t see all year. Six of them are in a city street, five with their mobiles. All connected but silent. Girl without phone looks at friend’s screen over her shoulder, but sure he’s bored, Educational psychologist Mari Carmen Deez described the scene: “The girl reads a lot and goes to theaters and museums with her parents, so They are offering other more cultural and wider possibilities. Of course, you don’t have that variety in the city.”

Tomas Canto, Child Psychiatrist at Doctor Balmis Hospital, explains that Addictions come when there is no alternative: “Entertainment through technology is more personal. If a minor seeks out activities that are rewarding and has no choice, replace one activity with another, Addiction comes when you engage in inappropriate behavior that means leaving the relationship, for example.”

Universal Health Minister himself already states that technology addiction is a problem: “It is very disturbing that we see such a higher number of suicide attempts in the age group of 14 to 18 than we are seeing. New technologies There’s an alienation and addiction to and we don’t see society reacting in a logical way.

Diaz also indicates that the responsibility rests with adults: “Younger children are more vulnerable to technologies such as mobile phones and they have fewer weapons to defend themselves, so he has taken them openly. His parents are examples. Some adults come to WhatsApp to express their condolences. It’s not the kids’ fault.”

A possible solution, the educational psychologist indicates, is to pay more attention to minors. ,You have to spend time with minors and not lose touch, even with teens who don’t feel like talking to parents., Don’t leave them in the hands of the machines. It’s about being a father.” Canto, for his part, talks about the workaround: “Technology is neither good nor bad. they pick up the cell phone when given, I worry that they are on mobile because they have no choice. It is not the use of video games or communication devices, but that they are the only alternative to doing nothing else.

The advent of technology cannot be reversed, says the child psychiatrist: “It has grown like a ball and now that we are more aware, we are in the stage of finding solutions. We need alternatives and if possible they are accessible and cheap“. Diaz also points out that it’s not about going against technology, but about keep limits: “I use computer and mobile myself, it’s about overuse. Use of technology in children should be regulated Although it is more uncomfortable than giving them mobiles.”

Both experts agree that it’s not necessarily about going back to the past, but adopting what is now and motivating children to do activities: “No child would want to read by themselves. On the other hand, If enthusiastic teacher literature, it can make a child like himself. But it’s not boring, it doesn’t look like crap.”

The child psychotherapist, in fact, places less importance on video games and more on other types of content that minors can access without a filter: “We already know that anyone who plays violent video games is violent. does not happen. Instead, Short messages from TikTok or Instagram modify reality, They give them unfiltered messages about what the world is or what reality is, as well as messages of an obscene nature. The beliefs and values ​​that make up the world used to depend on your home, friends and school, but now on the Internet too. The question is, in which one should I live longer? If the answer is virtual, that would be my biggest impression,

Canto also emphasizes that This generation of minors hasn’t lost skills like patience Or the attention spans just because they’re young: “Biologically they have the same potential, Only now you have the possibility to take out your mobile whereas earlier you had to bear the boredom, I think it is a question of supply and demand. If you only have one program to watch, you swallow it, if you have Netflix you go around and you don’t see anything. Kids are no different.”

The educational psychologist also advocates promoting activities in which children interact with other children: “It is important for children to find a group of people, Now many people lead a life of school and home. If parents suggest that it is convenient for them to stay in the park for a while and expand their communication circle, they will do so and those meetings are convenient for us. Even events like baptisms, weddings and parties suit us. If we don’t socialize, we end up shutting down,

Canto further notes that “Sports in general are good, especially team sports and those that help improve self-control, such as taekwondo.The key, he emphasizes, is to have fun: “If you sign up and you’re bored for day three by day four you won’t want to leave. We adults know that believing doesn’t guarantee acting. The doctor may tell you that you have to lose weight and that you as a patient are confident and nothing is guaranteed. Are there activities available for children and teens that are playful-educational? In a city where everything is 15 minutes away, everything is easy, maybe not so much in a city like Alicante. If your friends don’t live within a 10- or 15-minute radius, how are you going to meet them?”

Child psychiatrists emphasize that it’s all about doing pedagogy: “You have to do the work of teaching and learning, but have options so as not to be left to the last resort.”