Fetterman-vs.-Oz Campaign Turns to a Focus on Criminal Justice 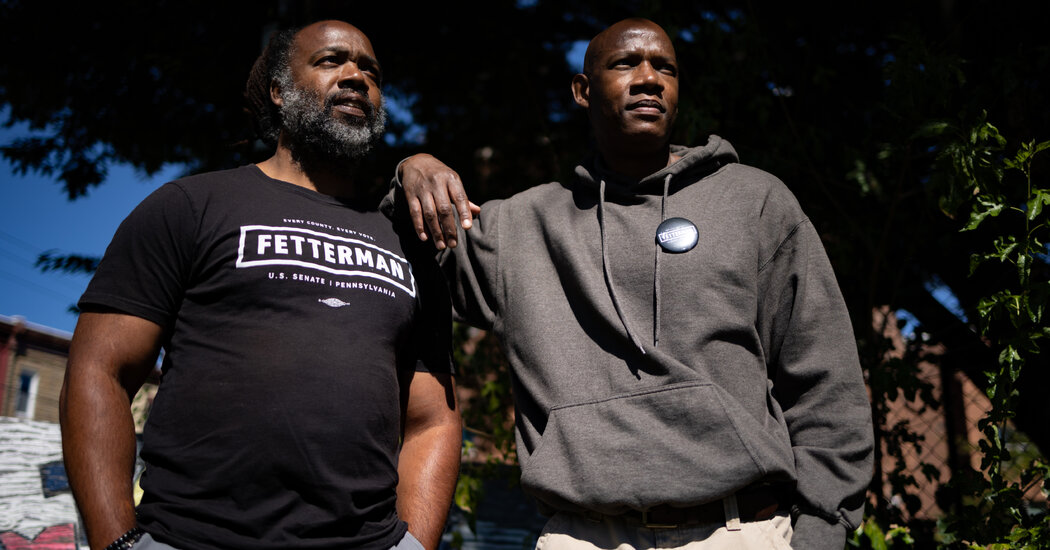 Lee and Dennis Horton maintained their innocence through 27 years behind bars. The brothers were convicted in a 1993 robbery and fatal shooting in Philadelphia that they say they did not commit.

“We were forgotten men,” Lee Horton said. “Nobody was paying us any mind. John Fetterman reached out and pulled us up. He saved our lives because there’s no doubt we would have died in prison.”

Mr. Fetterman, the Democratic nominee for Senate in Pennsylvania, ran for lieutenant governor in 2018 in large part to rejuvenate the Board of Pardons as a last stop for justice. One of the lieutenant governor’s few duties is to be the chair of the board, which had grown moribund.

Under his leadership, the number of inmates serving life sentences who were recommended for clemency and release, including the Hortons, has greatly increased.

Now that record has become a top issue for Mr. Fetterman’s opponent, Dr. Mehmet Oz, with Republicans training intense fire on the Democrat on social media, in email blasts and in $4.6 million in TV ads accusing him of “trying to get as many criminals out of prison as he can.”

After the Horton brothers were released in 2021, Mr. Fetterman gave them jobs as field organizers for his campaign.

“If John Fetterman cared about Pennsylvania’s crime problem, he’d prove it by firing the convicted murderers he employs on his campaign,” Brittany Yanick, a spokeswoman for Dr. Oz, said this month.

Mr. Fetterman, in an interview, accused Dr. Oz of fear-mongering and twisting the facts of the Hortons’ case and those of others he championed. “Of course, these ghouls are going to do that kind of thing and distort and lie about the truth,” he said.

Across the country, Republicans have taken up the issue of crime to rally midterm voters, confronting a rise in violence in most major cities that began during the coronavirus pandemic. Among them is Philadelphia, which is on pace to equal last year’s record 562 homicides.

While attacking Democrats as soft on crime may be standard for Republicans in most election years, Pennsylvania’s Senate contest offers an especially pointed contrast because Mr. Fetterman has turned the pardons board into a cause célèbre over four years.

Rather than soft-pedaling his record, Mr. Fetterman expressed satisfaction in winning the release of inmates who served decades in prison, generally with model records.

“There were some wrongs that needed to be put right, and there were a lot of people caught up in this system that were innocent or deserving” of release, he said.

If Republicans “weaponize” his record and “destroy” his career over his advocacy for second chances, Mr. Fetterman added, including for the Hortons and other men he said were wrongly convicted, “then so be it.”

In a poll of Pennsylvania voters by The Morning Call/Muhlenberg College last week, only 3 percent named crime as the most important issue in the midterms, well behind the economy (22 percent) and abortion (20 percent). But the pollster, Chris Borick, suggested Mr. Fetterman’s 41 percent disapproval was driven by Republican portrayals of him as “too left-leaning,” which have included attacks on his pardons record. The lieutenant governor led Dr. Oz, a former heart surgeon and celebrity TV host, by 49 percent to 44 percent, within the margin of error.

Barney Keller, a spokesman for Dr. Oz, said his campaign would continue to attack Mr. Fetterman on crime. “Dr. Oz has surged in the polls because John Fetterman is the most pro-murderer candidate in America,” Mr. Keller said.

While individual pardon cases are complex, requiring voters to absorb details and nuance, the G.O.P. attacks on Mr. Fetterman are meant to deliver the opposite: a blunt, visceral punch.

The Oz campaign created a website called Inmates for Fetterman, highlighting the crimes of convicted murderers whose release Mr. Fetterman sought, and asking for donations to Dr. Oz.

The Oz campaign has singled out the Horton brothers, whose release Mr. Fetterman calls one of the pinnacles of his career in public office. The brothers share a name but are not related to the most infamous released inmate in a political attack ad, Willie Horton, whose crime spree while on a furlough program hurt the presidential candidacy of Michael Dukakis in 1988.

Invoking that episode explicitly, Mr. Fetterman said he had anticipated that opponents would “Horton us” over his championing the brothers’ release.

Like more than 1,100 lifers in Pennsylvania’s prisons, 70 percent of them Black, the Horton brothers were convicted of second-degree murder, a charge filed against suspects who participate in a felony — such as robbery, arson or rape — that leads to a death. It also includes accomplices not directly responsible for a fatality who drove a getaway car or acted as a lookout.

Pennsylvania is an outlier in mandating life without parole for second-degree murder, and reformers argue that it violates constitutional protections against unduly cruel punishments.

With no possibility of release through the normal parole process, these inmates have been encouraged by Mr. Fetterman to seek commutations before the pardons board. The board can recommend either pardons (for inmates already released) or commutations (for those still behind bars). The five-member board, which includes Attorney General Josh Shapiro, the Democrats’ nominee for governor, must unanimously approve commutations, and the governor must sign off. Mr. Fetterman said that in each commutation case he supported, he asked the prisoner’s warden if he would want that individual as a neighbor. “And they’re like, ‘Absolutely,’” he said.

Commutations — typically, a reduction of a life sentence to time served — were once common, but in the tough-on-crime era beginning in the 1990s they all but ended. Mr. Fetterman argued that “those who didn’t take a life” and had clean records over decades in prison should be “living out their lives at home.”

Under his chairmanship, the board has recommended 50 commutations of life sentences, compared with just 10 in the preceding two decades.

In addition to commutations, Mr. Fetterman is under fire from Republicans for opposing certain life sentences for murder and for a statement he once made that he “agreed” with a corrections official that prison populations could be cut by a third with no harm to the public.

For purposes of soft-on-crime attacks, it little matters that murders rose during the pandemic in blue states and in red states alike, and in cities, suburbs and rural areas. Studies show low recidivism rates for lifers released after their sentences were commuted: about 1 percent for inmates over age 50, in a Pennsylvania study from 2005.

Mr. Fetterman said he did not support releasing a third of all prisoners — about 12,000 of Pennsylvania’s 36,000 inmates. He said the official who remarked that cutting prison populations by a third would not threaten public safety was a former secretary of corrections appointed by a Republican governor. And the life sentences he seeks to end are for second-degree murder.

Last week, in a visit to Philadelphia to promote safe streets, Dr. Oz criticized Mr. Fetterman’s record on the pardons board and proposed his own anticrime measures, including support for the First Step Act. That law, passed in 2018 with bipartisan support, includes sentence reductions for federal inmates with good behavior — a version of the second chances that Mr. Fetterman espouses.

Malcolm Kenyatta, a Democratic state representative from Philadelphia, said that if Dr. Oz and Senate Republicans cared about high crime rates, they would support investments in poor communities such as raising the minimum wage, and gun safety measures that go beyond the limited bipartisan bill signed by President Biden in June. That law expanded background checks for gun buyers under age 21 and funds red-flag laws that let authorities take guns from people deemed dangerous.

“Dr. Oz and Senate Republicans do not give a damn about people in Philadelphia and about the crime that folks are enduring,” Mr. Kenyatta said.

Mr. Keller, the Oz spokesman, did not answer directly when asked whether Dr. Oz would have voted for the bipartisan gun law. “Doctor Oz is interested in how the implementation of this law will occur, and was particularly interested in the new funding for mental health,” Mr. Keller said.

Mr. Fetterman was so convinced that the Horton brothers were wrongfully convicted that after the pardons board rejected their first clemency petition in 2019 — Mr. Shapiro, the attorney general, voted against it — he suggested he would run for governor if that’s what it took to get them out.

“The trajectory of my career in public service will be determined by their freedom or lack thereof,” he once told The Philadelphia Inquirer.

The deputy superintendent of the state corrections department endorsed the Hortons’ release. A brother of the man killed in the 1993 shooting, for which the Hortons and a third man were convicted, was opposed. “They took a human life, and they don’t deserve to be out in society,” the victim’s brother, Reinaldo Alamo, told The Inquirer. The third man in the case, who police records said was the actual gunman, was released in 2008.

The brothers finally won clemency in their second try, in 2020. Mr. Fetterman set his sights on the Senate, and Mr. Shapiro ran unopposed for the Democratic nomination for governor.

Since the brothers returned home to Philadelphia, the corrections department has invited them to speak monthly to cadets training to be prison guards, Lee Horton said.

Their work for the Fetterman campaign includes attending ward meetings, telling their story at rallies and simply walking the streets.

“On any given day we’re out talking to people about John Fetterman’s policies about minimum wage, how he would make average, everyday working people’s lives better,” Dennis Horton said.