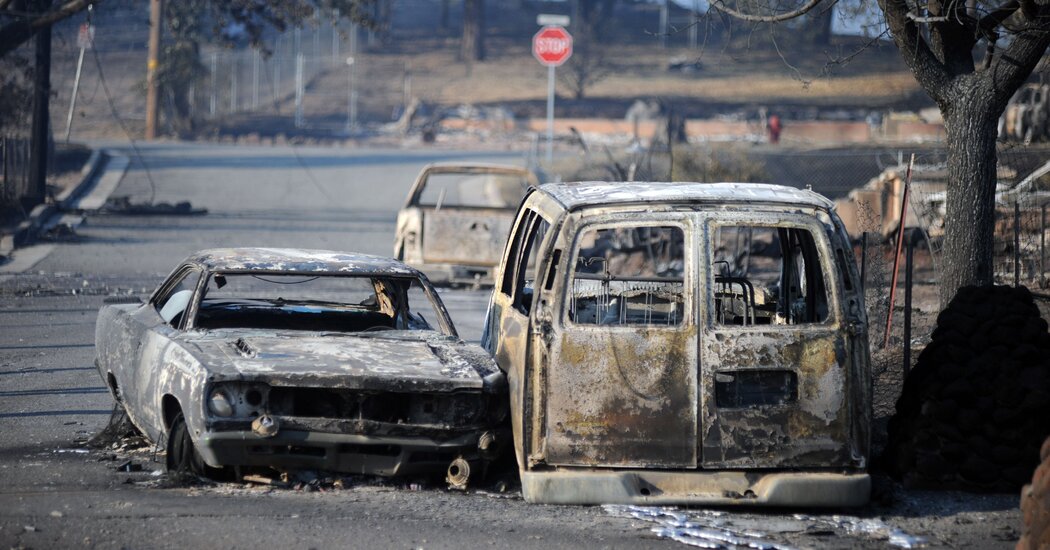 A wind-whipped fire that erupted near a defunct lumber mill in Northern California on Friday and became a fast-moving inferno has destroyed at least 50 structures and prompted the evacuation of thousands of people in rural Siskiyou County, fire authorities said on Saturday.

The number of structures destroyed was expected to rise after teams inspected the damage, said Chris Anthony, the chief deputy director of Cal Fire, the state’s fire protection agency, in a briefing on Saturday.

The blaze, named the Mill fire, which damaged the town of Weed, Calif., and nearby communities such as Lake Shastina and Edgewood, was one of at least four sizable California wildfires to ignite in the past four days and came as a massive heat wave roasted the West. Excessive heat warnings are in effect across much of the state.

Los Angeles County firefighters on Saturday were continuing to battle a fire near Castaic that had consumed more than 5,000 acres and that had closed parts of Interstate 5 on Wednesday. Another fire, east of San Diego, led to evacuations earlier this week and closed the Tecate Port of Entry at the border with Mexico. There was little growth from both fires on Friday night, Mr. Anthony said.

In Gazelle, a town roughly 10 miles northwest of Weed, another fire, the Mountain fire, has burned more than 3,000 acres, according to fire authorities. It was 5 percent contained on Saturday morning. The extent of the damage there was not immediately known.

Authorities are still investigating the causes of the four fires, but California and other states have been plagued by an ongoing wildfire crisis. Climate scientists say human behavior, mainly the burning of fossil fuels like coal and oil, has released greenhouse gases that increase temperatures, drying forests and priming them to burn.

Earlier this year, fire officials warned of the extreme risk in arid forests and chaparral.

The current heat wave in California has created conditions that can make fires spread more rapidly and sideline firefighters with heat-related illnesses.

Jon Heggie, a battalion chief for Cal Fire, said that the first call about the Mill fire on Friday came at 12:49 p.m. from a subdivision in Weed, near a property owned by a wood products company, where some older buildings were undergoing demolition. Within two hours, the blaze had grown to some 900 acres and evacuation orders had been issued for Weed and nearby communities. By 7 p.m., the blaze had grown to 2,580 acres, Cal Fire authorities said.

The blaze had grown to 3,921 acres and left multiple civilians injured by Saturday, Cal Fire authorities said, though they declined to elaborate on the extent of the injuries. On Saturday morning, the fire was 20 percent contained after being zero percent contained on Friday night.

Kimberly Greene, the mayor of Weed, said that she was at the local community center rebuilt after a 2014 wildfire when the spouse of a co-worker ran in and reported smoke in the distance.

“By the time we walked outside,” she said, “you could see the flames jumping the street.”

The air was hot and dry, she said, and the wind was “howling.” She rushed home and packed her car while fielding reports from fire authorities and from her neighbors in the working class town of about 2,900.

“We have our toiletries and our important papers, we have our guns out of the safe and packed and our trailer ready to go,” she said. She had not yet heard of any fatalities, but she said that a number of homes had been destroyed and that the swiftness of the blaze concerned her.

“This one was so fast, I’m worried some people might not have gotten out,” she said.

Weed was devastated in September 2014 by the Boles fire, a relatively small but intense blaze that consumed 165 homes and other buildings in the small community.

The town is roughly 30 miles southeast of where the McKinney fire raged this summer and became California’s largest blaze in 2022, killing four people and burning more than 60,000 acres.

Last Call for 10.6.22 — A prime-time read of what’s going down in Florida politics