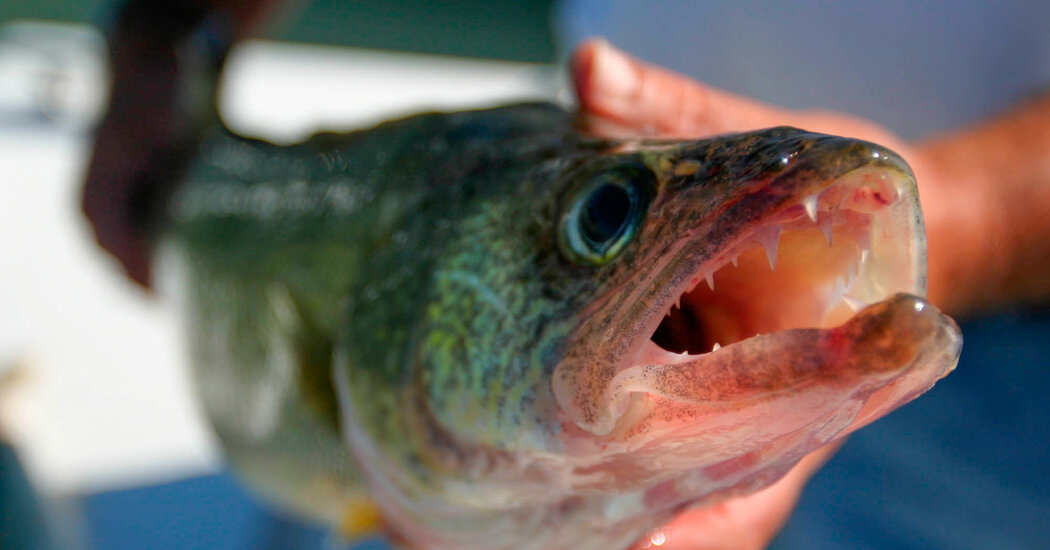 Jason Fischer became suspicious when the five fish he estimated to be about four pounds each — or 20 pounds total — weighed in at nearly 34 pounds. Attendees at a fishing tournament in Cleveland on Friday also had doubts. “No way,” one man said.

Mr. Fischer, the director of the tournament, known as the Lake Erie Walleye Trail, inspected one of the walleye and felt a hard object in its stomach that seemed unnatural. “It’s not like they’re eating rocks,” he said.

He grabbed a knife and sliced open the fish as Jacob Runyan, one member of the two-person team that presented it for weighing, looked on. The next moments rocked the competitive fishing world.

“We got weights in fish!” Mr. Fischer shouted, holding up an egg-sized lead ball he plucked from the fish in a dramatic moment captured on videos posted online.

He then spoke directly to Mr. Runyan as if he were an enraged umpire ejecting an unruly player. “Get outta here!” he shouted, interjecting the demand with an expletive.

Members of the crowd accused the men of theft and demanded that the police be called.

Mr. Runyan and his teammate, Chase Cominsky, would have finished in first place and scored a prize of about $30,000, but they were disqualified after the lead ball — and subsequently several others — were discovered in the fish, Mr. Fischer said.

Mr. Cominsky and Mr. Runyan could not be reached on Saturday or Sunday.

The scandal, which The Blade of Toledo reported, cast a shadow over their previous wins. They came in first place in each of the three previous Lake Erie Walleye Trail events this year, in June, July and September, raking in tens of thousands of dollars, and had won several other tournaments elsewhere, Mr. Fischer said.

Ross Robertson, a professional angler who has written extensively about fishing, said that the use of technology and ballooning prizes in recent years have made the sport more competitive, incentivizing cheating.

Cheating in competitive fishing is more common than many people think, Mr. Robertson said. He listed the myriad ways people do so: They have friends deliver pre-caught fish to them; they fish in prohibited areas; they put fish in cages before the competition; they stuff them with ice, adding heft during the weigh-in that melts and leaves no evidence.

“You have to consider that in some of these tournaments, ounces can mean tens, or hundreds, of thousands of dollars,” he said.

Mr. Robertson said placing weights into fish was a primitive and “sloppy” way to cheat, as seen with the suspicions of Mr. Fischer.

“It would be like saying a five-foot-tall person weighs 500 pounds, but you look at him and he looks like an athlete,” Mr. Robertson said. “These fish were so bulging.”

Mr. Fischer, who is a police sergeant in a Cleveland suburb, said he had spoken to the Ohio Department of Natural Resources about what happened. “Everything was turned over to law enforcement,” he said. A department representative could not immediately be reached.

Mr. Fischer said he was unclear what recourse he had for recovering money from previous tournaments won by Mr. Runyan and Mr. Cominsky.

He said that the men had taken voice-stress and polygraph tests for his tournaments, a common practice for winners of such events, and had passed. Mr. Fischer said an observer had also been on their boat during a previous competition.

“If they were able to clear all those hurdles, they’re obviously very good at deceiving people,” he said.

Mr. Robertson called the incident a “black eye” for the sport and said he had received messages from anglers across the country who wanted to know what was happening. But he also believed the scandal had the potential to be a blessing if the sport learned from it.

“Maybe this will be the thing that stalls other cheating and causes some major changes in procedures,” he said.